Any word on assistants? Seems like that should be finalized ASAP with all the recruiting needs...

Nothing official, but I've heard that Coach Legans and his two assistants, Bobby Suarez, and T.J. Lipold have been working from home in Cheney, but all three are expected to arrive in Portland this weekend.  I understand a third assistant is close to being hired, but I have no idea who it is. Both Suarez and Lipold got their first D1 coaching positions under Legans at EWU. 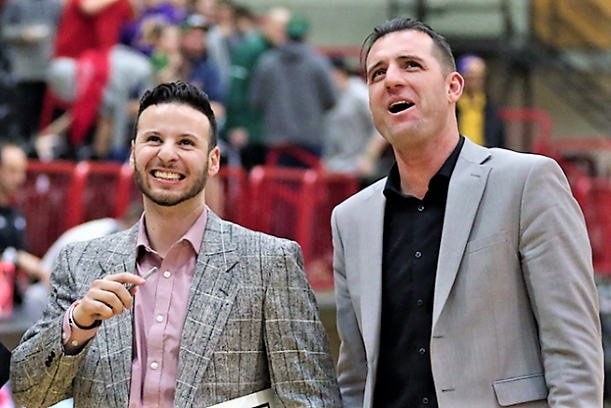 May have to wait until Coach Cantu's contract finally expires in June before they'll be able to pay him....

Speaking as a wanna-be baller, good to see a young and energetic coaching staff who are old enough to command respect of the players but young enough to identify and understand the guys.

Bobby Suarez is a 2012 graduate of Florida Gulf Coast and was an assistant to Coach Legans over the past four years at EWU, and before that he was on the staff at Florida State in various positions.

This past June he was selected by the National Association of Basketball Coaches to the Under Armour 30-Under-30 Team, representing 30 of the most outstanding men's college basketball coaches under the age of 30.

At EWU Suarez assisted with player development with emphasis on guards, and he was responsible for recruiting, in-season scouting of opponents, on-court coaching.

"Bobby is a shooting star -- the sky is the limit for him as his career keeps moving forward," said Legans. "He has a great ability to relate to our players and all of our recruits. His work ethic is incredible, and we are lucky to have him on our side."

Suarez did not play college ball but during 2009-2013 was the DOBO intern and student manager to include the now famous “Dunk City” team at Florida Gulf Coast that in 2013 advanced to the Sweet 16 of the NCAA Tournament where they defeated No. 2 seeded Georgetown and No. 7 seeded San Diego State, becoming the first No. 15 seed to advance to the NCAA Tournament Sweet 16.

T.J. Lipold is beginning his second season as an assistant to Coach Legans after one year in that position at EWU. Before that he was the assistant director of basketball operations and video coordinator at EWU, and finally the Director of Basketball Operations where he was responsible for film breakdown, scouting reports preparation, opponent player tendencies evaluation and day-to-day team operations.

Prior to his first year as an assistant coach, Coach Legans said, "His energy and passion is infectious, and he will be a huge asset as he helps coach our defense and the big men."

Lipold graduated from Westmont College in 2012 and played for two years there and was part of back-to-back 25-win seasons.  Before Westmont, Lipold played his first two years of college basketball for Saddleback College. While at Saddleback, Lipold earned first team All-Orange Empire League on a team that won the CCAA State Championship in 2010.  After completing his master’s degree in education in 2013, he started coaching at Saddleback College, serving as an assistant coach for three years.

“Coaching at the college level has been a dream of mine from as far back as I can remember because I grew up in a gym watching my dad coach at Long Beach City College.” Lipold said.

May have to wait until Coach Cantu's contract finally expires in June before they'll be able to pay him....

Hmm, no mention of a third assistant, maybe they are waiting until Cantu's contract expires.

Because there is no face-to-face recruiting until June, Legans and his two assistants should be able to handle the recruiting/coaching load themselves, it makes sense if that is what they are doing.

Hmm, no mention of a third assistant, maybe they are waiting until Cantu's contract expires.

"Jeremy is a craftsman that has proven himself as an excellent talent evaluator and developer of young men," Legans said. "He has built a great resume in a short amount of time working with high-level players and programs at the collegiate, club and prep levels. Jeremy's energy and passion fits exactly with our program mentality and he will hit the ground sprinting."

"I'm elated at the opportunity presented to me by Coach Legans, who I've known half my life, to help rebuild the University of Portland basketball program," Pope said. "The university, community and city deserve a program that they can be proud of, and our mission is to do just that. It is an exciting time for everyone invested!

"We will work tirelessly to put a staff and roster together that will help bring our vision for the program to fruition. We have all come from winning programs and understand what steps need to be taken, as evidenced in what Coach Legans has done during his time at Eastern Washington."

AZCP went undefeated in league play, won a Grind Session championship and qualified for the 2021 Geico High School Nationals as the overall No. 4 seed. The team dropped a 51-49 decision to No. 1 Montverde Academy in the semifinals to finish the year with a 30-2 record. The only two losses came against Montverde, with the first an overtime defeat on the road.

Prior to his stop in Arizona, Pope spent two seasons at Orangeville Prep in Ontario, Canada as an assistant coach under Tony McIntyre. Considered the top prep program in the country, Orangeville graduated seven kids that went on to play Division I basketball during Pope's time on staff, went undefeated in all competitions and won the Ontario Scholastic Basketball Association championship. Notable alumni from Orangeville include current NBA players Jamal Murray, Luguentz Dort and Thon Maker.

Pope also was an assistant coach for the NIKE Bounce Basketball Clubs U-17 and U-16 EYBL teams during his tenure in Canada.

A graduate manager at the University of Washington under head coach Mike Hopkins in 2017, Pope helped with numerous facets of the program including on-court skill development, scouting, film breakdown, scheduling and student-athlete management. The Huskies finished the 2017-18 season with 21 wins, qualified for the National Invitational Tournament (NIT) and two players from the team would go on to play in the NBA.

After playing two seasons at Cerritos College, Pope had a brief stop at San Jose State and then concluded his playing career with one year at Biola University.

He earned his undergraduate degree from Cal State, Los Angeles in 2017 and then secured a Master of Education in Intercollegiate Athletic Leadership and Coaching from the University of Washington in 2018.

Jeremy Pope wrote:I’m BLESSED! Can’t put into words how much this means to me. A great opportunity awaits us all! Excited to join @CoachLegans, the staff, SA’s & administration, as we work to bring this program back towards the top of the WCC! #GoPilots #WeArePortland @PilotHoops

This podcast is way too long at over an hour, but watching it in bits you learn a lot about UP Assistant Coach Jeremy Pope.

Welcome Jeremy, excited to have you aboard!!

Arizona Compass Prep is also where TyTy Washington, a 2021 recruit that recently cut Portland out of his final choices, hails from.

Can't get a 4 star, well then just get...his assistant coach?

"Perin brings energy and a willingness do all the little things to help our program grow," Legans said. "Like everyone on our staff, he has come from winning programs and understands how hard we work and what it takes to make Portland Basketball thrive. Our guys are going to enjoy his presence, passion and positive attitude."

"I am extremely excited and thankful to be a part of the University of Portland community and men's basketball staff," Foote said. "The opportunity that Coach Legans and the University presented is humbling and rewarding. I am ready to get to work with our tremendous staff. We all have a vision of winning and bringing great success here to UP."

Foote has a wealth of experiencing working in basketball, holding positions at both the college and professional level. Most recently, Foote was the student-athlete development coordinator as a graduate assistant at Cleveland State, dealing with day-to-day operations and on-court skill development. Foote also earned a Master of Education in Sport Management from Cleveland State.

The Roswell, Ga. native was the men's basketball manager for the Florida State Seminoles during his time as undergraduate, working with head basketball coach Leonard Hamilton for four years from 2016 to 2020. Foote helped run Hamilton's summer basketball camp during his time there and assisted with Winthrop University's summer camp as a coach in 2017.

Foote also held several roles assisting with USA Basketball. He has worked as a support staff member for summer camps at the U-14, U-15, U-16, U-17 and U-18 levels and assisted the USA senior team in the summer of 2019. Foote was also a volunteer assistant coach for the Showtime Ballers AAU program for two years.

Coach Legans' staff just got a lot taller and better educated with the hiring of 6-8/250 Aleks Abrams as the Director of Basketball Operations.

Aleks, from Newbury Park, California, played at Cal Poly for three years before grad-transferring to Miami (Ohio) where he played a year while getting a graduate degree in kinesiology.  Most recently Aleks was a graduate assistant at Santa Clara where he got another master’s degree, this time in psychology.

Aleks may not be the tallest ever UP DOBO at 6-8 (former UP star and DOBO Kramer Knutson is 6-9), but if he is close to his roster weight of 250lbs at Miami, he is certainly the biggest! 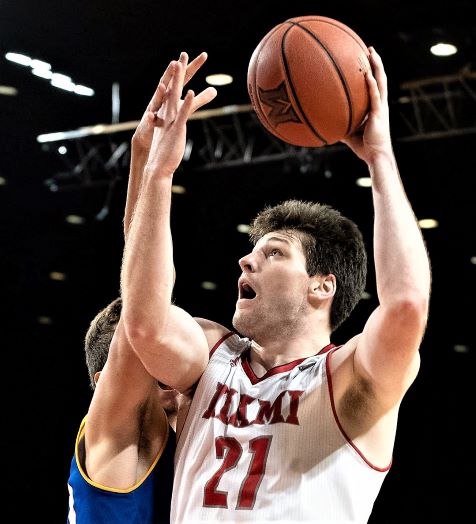 (The previously announced DOBO, Perrin Foote, left the job after a few days for personal reasons.)