Fans have noticed. Funny how some wins can draw a crowd. I hope Scott took note. 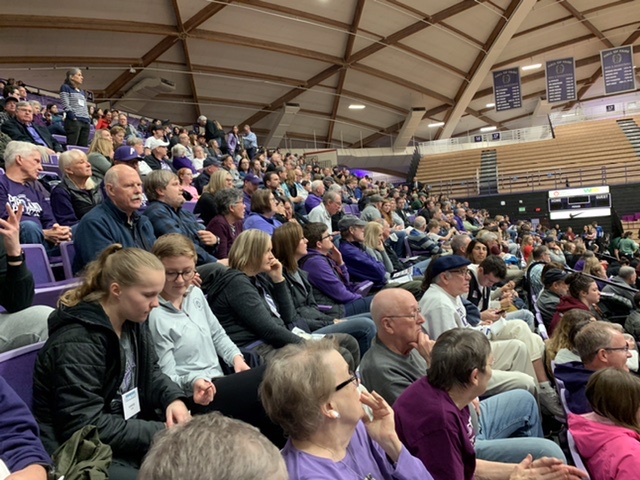 In the post-game interview, Maddie Mulheim credited the fan support as a factor in the team's performance.

I attended all those games, but yesterday’s game had more Pilots fans in attendance than the others!

I don’t recall anything memorable about the two GU games in ’99 and ’00 except that there were a lot of GU fans in the stands because both games were part of a double-header with the UP and GU men playing the other half.

The ’97 game against the Pat Summit coached Tennessee team was smack-dab in the middle of the Vols winning three straight National Championships in ’96, ’97, and 98, and even fans who had never watched a women’s game turned out for that one.  The Pilots went to the NCAA Tournament in ’94, ’95, ’96, and ’97.

Fun fact about the Tennessee game.  The Vols coaches thought they had scheduled PSU for that night, and it wasn’t until just before flying to Portland that they found out PSU was playing out of town and they were to play the Pilots.

Of course, the reason there were so many in attendance at the Louisville game in ‘11 was because of the Schimmel sisters, Shoni and Jude.  Each grew up on the Umatilla Indian Reservation and attended Franklin HS in Portland to get more D1 recruiting exposure before playing together at Louisville and before each played in the WNBA.

There should be a large turnout for the #12 GU vs. UP game at 2pm on Saturday February 29th, as it will be the last chance to see the Pilots at home this season before they head to Las Vegas and fans will be able to salute UP's only senior, Jesuit grad Kate Andersen, before the game.

While we were getting our hearts shredded in the Chiles,

The women turned the tables on Pepperdine in Malibu, coming from a 10 point deficit at the half  and 15 points down in the third to shoot 50%-50%-82% and score on two free throws With four seconds left.

Team effort. Shooting in the first quarter was a dismal 23% but got better every quarter until they shot 53% in the last frame.
Lots of different players scored and points off the bench. Kate Andersen got 13 boards and Walker got 8.


Is there any way to see a replay? I just caught glimpses.

I hope we at least get some extended highlights.

Got home from the men's game in time to watch the 4th quarter only, but that was the quarter to watch as the Pilots outscored the Waves, 21-9.

The Pilots were down by as many as 15 points in the first half, and PU had won 6 straight games coming into the game, so this may be a good indication UP is peaking at just the right time before heading to Las Vegas.  Earlier this season UP blew 20 point leads against PSU, Loyola-Chicago, and GU...so it was nice to see the women turn the tables and pull one out.

This was a big game for UP as it put them alone in 4th place...and one more win will secure 4th and the double-bye in Las Vegas.

UOP still has a chance to catch the Pilots as they have beaten them twice already this season and should be able to win their upcoming three games.

UP has only two games left, LMU in LA tomorrow and #12 GU in the Chiles Center at 2pm on Saturday February 29th.

UP blew out LMU 89-78 this Afternoon on some hot shooting. Mulheim was 7 of 9 from beyond the arc and was perfect from the foul line for 27 points.
Fowler also added 27 to the effort from Closer in, and added a monster 17 rebounds.
Andrews added 15 points, 6 rebounds, and 6 assists.


So fourth place it is, and a bye until the quarters.

Congrats to coach Meeks on the turnaround to the program

DoubleDipper wrote:This was a big game for UP as it put them alone in 4th place...and one more win will secure 4th and the double-bye in Las Vegas.

UP has only two games left, LMU in LA tomorrow and #12 GU in the Chiles Center at 2pm on Saturday February 29th.

@PortlandWBB wrote:Pilots win!!! They out-score the Lions by 10 in the 4th.
Muhlheim drains 7 three's to finish with 27 points, and Fowler collects a double-double with 25 points and 17 rebounds!

@sleykam wrote:Win locks up fourth place in the WCC and double bye at Conference championship in Las Vegas for
@PortlandWBB! Team won't open up at the Orleans Arena until two weeks from today.

For those making plans to head to Las Vegas to watch the women play in the WCC Tournament, or to watch them on TV or listen to them on the radio, their first game is at 1pm on Saturday March 7th.

The game will be televised on BYU TV (234 on Comcast in the Portland area), and Jason Swygard will provide the play-by-play coverage on ESPN Radio 910, in Portland.

The Tournament starts on Thursday the 5th, and as the Pilots have a double-bye it won't be known until Friday afternoon who UP will play.  With Sunday off, they will have to wait until Monday to play in the semi-finals, with the finals on Tuesday.

Geezaldinho wrote:I’ll be in the Chile’s center watching the women. they can play.

UP has wrapped-up 4th and #10 GU is guaranteed 1st, but GU will be attempting to improve their NCAA seeding by trouncing the Pilots.

Remember, UP was up by 20 in Spokane in the first WCC game of the season before losing...it will be interesting.

Geezaldinho wrote:I’ll be in the Chile’s center watching the women. they can play.

Okay, we had "only" 1,700 in attendance, but there were a number of "regulars" missing...I blame the coronavirus.

Next game is at 1pm on Saturday in Las Vegas vs. either SCU, USF, or UOP. The game will be on  BYUtv, ROOT Sports Northwest (delayed), on ESPN Radio 910, (according to Jason Swygard) and streamed on the WCC Network.

The preseason coaches poll had UP coming in last.

Mike Meek Coach of the Year?  I can't imagine it going to anyone else!

UP lost twice to GU, USD, and UOP, and split with BYU...all better teams than UP, but the Pilots' future is very bright with three potential starters returning from injury next year...all of whom took medical hardship waivers this season.

DoubleDipper wrote:Mike Meek Coach of the Year?  I can't imagine it going to anyone else!

Cindy Fisher from USD was selected as Coach of the Year...

The votes are in: