Williamson committed weeks ago to Southern Utah, as was already posted. Players obviously can at least commit despite lockdown.

One would think that if Pilots were intent on signing someone else for next year, an announcement would not be far off. Perhaps they are standing pat, waiting to use scholarship. Cochrane would be nice, but a long delay since departing Ducks.

wrv wrote:Williamson committed weeks ago to Southern Utah, as was already posted. Players obviously can at least commit despite lockdown.

Ah, I didn't know that her commitment had been confirmed after you posted that "Williamson appears to be headed to the Southern Utah Thunderbirds..."

Ms. Williamson has posted that she is committed to Southern Utah. That may not be the confirmation you seek, but it is powerful evidence. Why Southern Utah has not posted anything is anybody's guess.

Are the Pilots actively recruiting for next year still? I certainly do not know, nor am I aware whether they have offered Cochrane or are pursuing her after all this time since she entered the transfer portal.

wrv wrote:That said, any insight on whether we continue to recruit others at the post for next or the following year?
Condron is not a graduate transfer or transfer. Do we continue to search or are we done recruiting for this year?

The staff is actively recruiting for 2021, and although there is an open scholarship now, it’s likely they will not pick up another player for 2020 unless the right transfer were to come along.  At one time it was thought UP was on Cochrane’s radar, but now no one seems to know her plans.

UP is the only WBB team in the WCC that has not signed a transfer this offseason, and in total there are 14 transferring newcomers to the WCC that I have detected…including three Aussies and a New Zealander.

There are also several major college transfers coming to the WCC:

SCU has one each from Arizona and UCLA.
LMU has one each from Baylor, Florida, and Georgetown.
BYU has a player from Michigan St. and a New Zealander from Colgate.
SMC has a transfer from UW.
PU picked up a player from TCU.
USF has an Aussie transferring from Eastern Washington.
UOP has an Aussie from George Mason.
USD has the Aussie transfer from Utah St. that was mentioned earlier.

The one transfer coming to GU is Abby O’Conner, the Loyola Chicago guard who dropped 16 on UP last December in the Pilots’ heartbreaking overtime loss.

Although UP does not yet have a transfer this year, Rose Pflug transferred from PU last fall and will have two years of eligibility after sitting this past season.

In the previous post, 14 players are listed as transferring into the WCC from other universities and colleges. In addition, eight of the 10 WCC schools have signed 23 new players other than transfers for the coming season, including two JUCOs and 21 coming directly from high school.

Another nice article about McKelle, this one from Orlando Sanchez at KGW News.

When is the last time a student athlete signed with Portland who averaged 23 a game, male or female? And her high school team won the state championship while she scored, so probably no ball hog gunner? And she was named player of the year?

Let's not underestimate the potential of the coach's daughter. Credentials . . .not everything, but not to be ignored.

Braslis is the second transfer, the other from TCU, to go along with four incoming freshmen for the Waves.

She'll have to sit a year unless she gets a waiver...from Melbourne, she had to get out of Utah and closer to the water in Malibu or she'd go nuts??

@PortlandWBB wrote:We are excited to announce the addition of Emilia Shearer to our program & family! Welcome to the Bluff! #WeArePortland

@PortlandWBB wrote:We are excited to announce the addition of Emilia Shearer to our program & family! Welcome to the Bluff! #WeArePortland

Good find...yes, she is definitely planning to arrive this summer and play this coming season.

Looks like a good pick up for Coach Meek and the Pilots...

More than once I've called Taki out for not getting his teammates to perform the haka before tipoff...maybe Emelia can bring the tradition to the women's team...

Pretty funny the graphics folks assigned Emelia an invalid NCAA basketball jersey number....but it's the number she wears on her Harbor Breeze team shirt back home...welcome Emelia, I'm told she signed on Thursday. 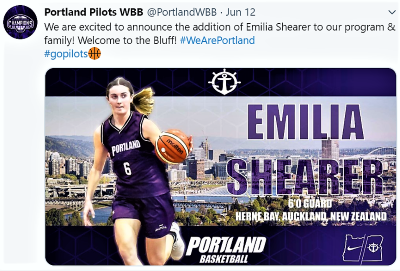 It appears, though I have just reviewed the roster once, that next year's squad will have 9 players between 5'10 and 6'1, primarily guards but clearly forwards among them. This abundance is not a group to whom you would be inclined to add unless a prospective player brought special talents, such as outside shooting, so important with the 3pt arc.

Emelia Shearer appears to shoot well from the outside, though we have limited video. Let's hope so.

More comments on Ms. Shearer, these from coach Meek:

"We are excited and thrilled to have Emme join the Pilot family," Meek said. "She comes with high-level National Team experience and International play. She is an incredible all-around athlete who competes with great energy. Most importantly everyone I talk with raves about what an outstanding teammate and student she is, who also has a great desire and work ethic to improve. Those attributes will fit well with the high character of our current team and what we are striving towards as a program."

What appear to be quality players keep finding their way here.

All 6'7" of Patricia Morris is leaving OSU. Not possible, I suppose, that the Pilots find room.

Rob's Jacket wrote:Any news or updates on where Lucy Cochrane might land?

No, not the University of Oregon, but the state of Oregon.

I think we can count on Coach Kelly Graves recommending UP to her after recommending Mike Meek as a coach at UP, and having attended a Catholic high school, Lucy may very well be deciding to come to a Catholic college to join the three Aussies returning this coming season and the two inbound the following year.

Could this be the news we've all been waiting the last 5 months for?

If Cochrane were to come to UP, she would have to sit a year if she does not get a waiver, but as Australia is still locked-down hard, and the 20-21 season is in doubt, it could be that sitting a year would be the best scenario. As I've stated before,

Even if she has to sit a year, she could add so much to the bench and to practice, and she would be available the following season after 6-5 Lauren Walker graduates.

Besides UO, there are only three other D1 schools in Oregon, and I just don't see her signing with the other two!

Cochrane here would be a coup. The Pilots without doubt would be formidable. Let's hope this is more than rumor.

Shasta Parker, who was really just looking for some playing time after being last off the bench during her two years at UP, has decided to transfer to D2 Cal State San Marcos.  I believe this is CSSM's first year in D2, up from NAIA...so it sounds like a great opportunity for her.

A good student, and biology major, Shasta was a walk-on at UP, so her departure does not clear another scholarship.

If my math correct, the Pilots have 13 student-athletes on scholarship, and one scholarship that is not available because walk-on McKelle Meek is the coach's daughter, and that counts against the number of scholarships allowed.

Women's D1 basketball is allowed 15 scholarships.  UP has 13 scholarships being used and 1 not available.

UP has one scholarship available...and seems like a 6-5 Aussie transfer would be a good addition... 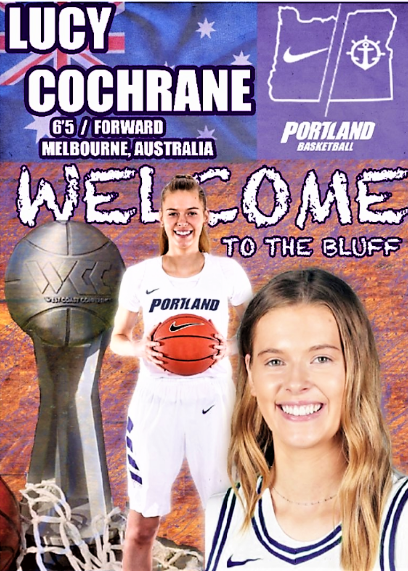 B) is that another new UP logo in the upper right of your picture?

B) is that another new UP logo in the upper right of your picture?

1. I don't think that has been decided, but as she is currently in Melbourne, Victoria, a state that is locked-down, it is difficult to say when she will even come to the US.  As we don't know if there will be 20-21 season, I personally think she should sit a year while further developing her game and working with her new teammates. (Lucy is the co-founder of Lenis Swims, a swim wear manufacturer, so she is also very busy outside basketball and school.)

2. Yes, that is a new logo.  The first time I saw it was May 6th on Jayce Gorzeman and Mrs. DD's birthday.  Some might say it shows the political dividing line in Oregon, but I don't think that would be accurate as it would have to depict Portland and the People's Republics of Eugene and Ashland.  It could also be a depiction of the Cascade Mountain range, which would be artistically accurate, but then again, it could be spinoff of the P logo with the line running down the center of the P depicting the Willamette River.  I tend to think it is the Cascades.

But it is obviously a Nike/Pilot logo...so I think one of us will have to ask someone more knowledgeable of the logo's origin and design to find out the answer.  You'll notice is is neither trademarked nor registered as the Pilots' primary and secondary logos are. 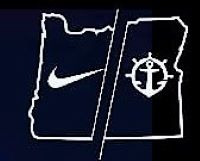 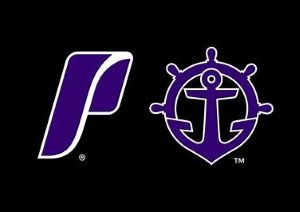 Yes, on many fronts, but primarily because it shows UP and the WCC can now attract high major players from overseas, IMO.

Immediate impact player. There will be a new backline defending behind the Pilot regulars. Blocked shots might well become a thing on the women's side. Is it possible that we push the Zags from their perch for the next few year's? Welcome Lucy Cochrane. Go Pilots.
Note we list Cochrane at 6'5"' whereas she was widely reported at 6'6". Hmmn.

Immediate impact player. There will be a new backline defending behind the Pilot regulars. Blocked shots might well become a thing on the women's side. Is it possible that we push the Zags from their perch for the next few year's? Welcome Lucy Cochrane. Go Pilots.