Pilots in the pros

Pilots in the pros

Chris Reeves is getting some playing time in Colorado

And of course Beni got his first goal In Orlando. At least he’s still wearing purple.

Rey Ortiz drafted by Cincinnati in the second round...29th overall pick in the MLS Super Draft.

The above link will take you to a video I think you'll like... 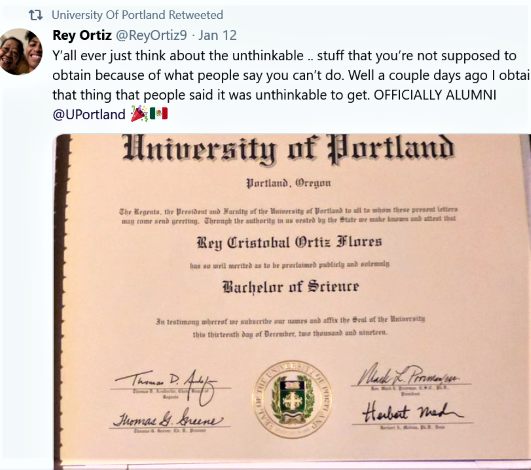 Rey Ortiz signed the first professional contract of his career with FC Cincinnati this morning. After being selected with the No. 29 overall selection in the 2020 MLS SuperDraft, and impressing the club in preseason, Ortiz will occupy an international roster spot for FCC in 2020.

The immediate future for Ortiz has not been determined. He could occupy an international roster spot for FCC, and the club currently has one more international than they have spots for. FCC have until Feb. 28 to finalize their roster decisions.

A long-long-time-ago Pilot in the pros: I watched a Bundesliga match this week for which Steve Cherundolo was the color commentator. He was not the worst commentator, but is definitely better with his feet than his mouth!

Kris Reeves is coming back from injury and tryin to finish up his degree
Injury sounds pretty gruesome.

Looks like Luis Robles is filling some big shoes in the players' negotiations with the MLS owners. This from the Portland Tribune:

One of the leaders of the players union is Luis Robles. The former Portland Pilot goalkeeper played most of his career with the New York Red Bulls but is now with expansion club Inter Miami. Garber last week singled out Robles for his efforts, a comment that Robles countered with a tweet that read:

"I'm part of a 729 man player pool, 85 player Bargaining Committee & a 7 player Executive Board for the MLSPA. We've never had a President, so being singled out is unfair to all of the players who have worked so hard through this process. We are a collective, not an individual."

In speaking with media last week, Robles said returning to play in Orlando feels insignificant in light of the crises facing the country. But he said the Orlando games will help MLS players strengthen their efforts to have a positive impact on challenges such as the fight for racial equality.

"I'm not saying Orlando becomes this perfect opportunity for us to be an agent of that change, but it helps."

The Timbers will play Orlando in the mls final as they beat Minnesota 3-1.

Benji Michel got the Orlando third goal on one of his patented box to box breakaways at the end when Minnesota put everyone forward for the equalizer attempt in the 97th.
Nice seeing the backflip again.

After a great season in Orlando, Benji Michel got called in the the USMNT u23 camp.