This is a personal inquiry. A while back I read a post on here that mentioned my uncle Chuck Dempsey. He would have attended there in the late 50s-early 60s. I was told he played basketball there but have no evidence of this. Anyone heard of him? Thanks.

No Dempseys on the list, and it goes back to the 1920s and 1930s. Maybe he played at Portland State?

Thanks. I found the old post from oldepilot. Not sure if he's still on. He mentions uncle Chuck on an intramural team called the Hawaiians.

Lol, of course he did.

I knew "Uncle" Chuck at UP, and as I recall he graduated from UP in 1967, but after that I have no idea where he went next. As OldePilot mentioned, he is deceased, but you may know the circumstances of his death.

I suggest you Private Message OldePilot, to see if he has any more information.

Dean Murdoch sent you the historical list of players that did not include Chuck's name, but I've always thought it was a disservice to those who played on the Freshman Team only, that their names are not included on the all-time list.  Yes, back in the day, as freshmen we were not allowed to play varsity ball.....and no, there was no 3-point line back in those days either.

Speculating here, but I think Chuck transferred to UP after his freshman year, so did not play on the freshman team. I remember playing against him during our fierce intramural games, but as many of us jumped from team to team each year, and from sport to sport too, I don't know which team he played on.  I certainly remember playing against the Hawaiians in football, and I recall most of the guys on the team, but I don't recall a Haole on the team.

(Can you imagine what kind of numbers Pete Maravich or Jerry West, or Bill Russell would have put up if they'd played 4 years of college ball.  And no, with just a few exceptions, players did not leave college early for the NBA in those day.)

Thanks so much for that information. He died when I was very young. Good to learn more about him. Yes the game has changed.

DoubleDipper wrote:Speculating here, but I think Chuck transferred to UP after his freshman year, so did not play on the freshman team.

I was wrong, Chuck DID play freshman ball at UP during the '63-'64 season, and he did play on the Hawaiians intramural basketball team with some of his freshman teammates starting the following year...so it would not surprise me they scrimmaged against the varsity.

Thanks so much. That explains the discrepancy with what I had been told about his playing there and not being on the roster. If anyone would like to share good memories that would be great. Thanks again for taking the time.

Chuck was a great guy, one of the RAs in Christie Hall when I was a freshman. His sister Lynn was in my class. He roomed with Mark Woutila, a track and field guy (shot/discus) from Bellermine Prep in Tacoma, I believe. Chuck was the head sports editor for the Beacon and wrote great accounts of the various intramural games, as well as the varsity sports. He played on the best intramural basketball team, the Hawaiians, with John Tejada, Anthony “Ants” Guerrero, and Del Haener (sp?) who was about 6’6” or better. They were a good team, Chuck was a deadly shot from the corner, and they did scrimmage the Varsity Pilots. I considered him to be a friend, role model, and mentor during those years.

Thank you. Love of family and basketball put me on this quest. I doubt I was ever the player he was but my best shooting spot also the corner (now worth 3)
Aunt Lynn lives in Wenatchee and Connie (mom) in Georgetown, TX. I tried to pm you as you were the original post I found that mentioned Chuck, but couldn't figure out how on Pilot Nation. Thanks again. Wish we hadn't lost him so soon.

Guest92 wrote: I tried to pm you as you were the original post I found that mentioned Chuck, but couldn't figure out how on Pilot Nation.

It could be you have to have at least XX number of posts on PN before you can PM a person, but if you see "PM" below a member's avatar or name to the left of their post, just click and start writing.

I'm confident OldePilot will help more if he can, and I too will do what I can to provide more information.

Still looking for a basketball picture of your Uncle Chuck!

OldePilot wrote:The Hawaiians intramural basketball team in the mid-late 60's scrimmaged the varsity (not the greatest of UP squads, but OK) and held their own. John Tejada, Ants Guerrero, Del Haener, the late great Chuck Dempsey, and various supporting cast members.

That post in 2012 is what started Guest92's quest to find more about "Uncle Chuck" on PilotNation and confirm his basketball prowess at UP .  I believe the following pictures from the Beacon in 1966 confirm Chuck's eventual all-star status after playing on the Freshman Team in 1963-64. (Thanks to Fr. Jeff Schneibel at the UP Archives for his research help.) 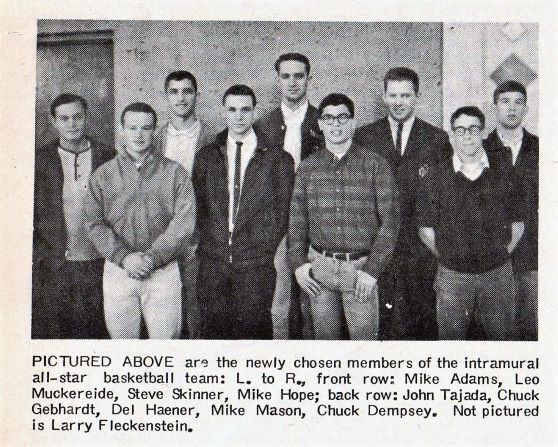 Chuck Dempsey was the unanimous choice to be a first-team intramural league all-star. Also on the first-team were Johnny Tejada, Del Haener, Mike Mason, and Mike Adams. 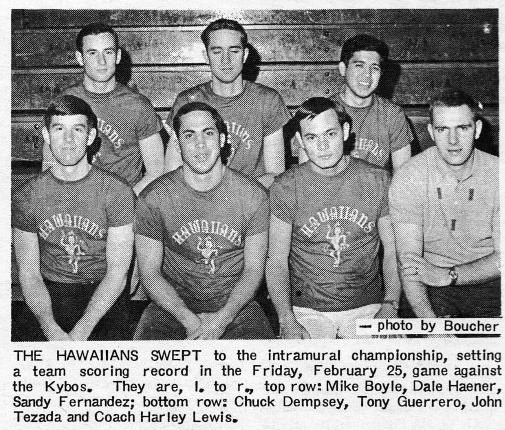 Mike and Chuck are deceased, Del and Johnny live in Oregon, Sandy in California, and Tony (Ants) in Hawaii. Coach Harley Lewis, just 22 at the time this picture was taken, was later the long-time Athletic Director at Montana.

There were 16 teams in the intramural basketball league in 1966, and the Hawaiians won the league championship and the league tournament (the team I played on, the Huns, finished 3rd).  Chuck was the high-scorer in both the semi-final (15) and the final (25), as the Hawaiians defeated the Kybos for the championship. 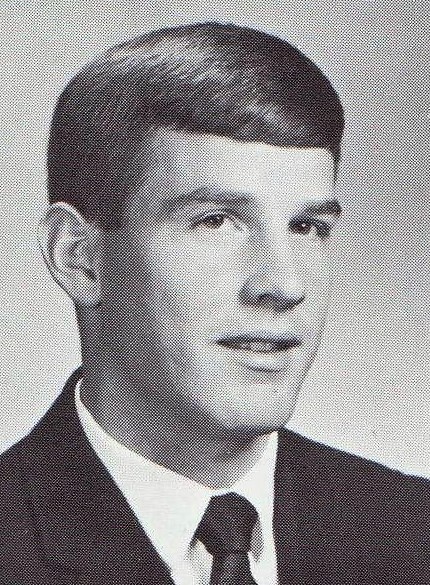 Wow. Thanks so much for this. Lots of good stuff here. Can't express how much it means having this. You guys are the best.