There will be a memorial service on 11/11 at Riverside Golf & Country Club in NE Portland.

A link to the Trib story:
https://portlandtribune.com/pt/12-sports/408861-308088-jack-avina-former-university-of-portland-basketball-coach-dies-at-89

I showed up on campus in '72, just as Jack was getting going. He recruited some local players, and also brought in some other athletes, like Stretch Braxton and Tiny Banks. He never had it easy. Those first years, games were at Howard Hall. Later, games were at Lewis & Clark in SW Portland, with minimal student attendance. A few big games were played in the Coliseum, including knocking off OSU. Finally, the Chiles Center opened. Jack only got two or three years in the EACC, before he was let go, and replaced with former Trailblazer hero Larry Steele.

Due to my military service, I did not see any of Jack's teams in action, but I've met many of his players in subsequent years who still remember him as a tough coach, but also a tough friend who put his players welfare first and foremost.

During part of Rev's time on the Bluff, and after Jack had coached in Turkey and Brazil, Jack could be seen sitting against the far railing behind the visitor's bench. Maybe it was sitting that close to the Pilot Pride Pep Band that caused his hearing to deteriorate.

Some may ask why Jack is not in the UP Athletic HOF, and the answer is, Jack didn't want to be inducted in the HOF.  I'm not sure his reasoning, but I'd heard he was bitter at being let go by UP after the 1987 season. I once heard that he told someone, "You can put me the HOF after I'm dead if you want," so maybe now's the time.

As Jack's son Joel said in the Tribune article, "To that generation of guys, Dad changed their lives. He pushed them to be what they could be. The end result is, we got a lot of college graduates who have kids who became college graduates."

"Dad was the first college graduate in his family. Every one of his children graduated from college. He wanted the same for his players. When we recruited, that's what we talked to (the prospects) about. 'You can get an education and change your family's trajectory.' He was right. He did, and they did." 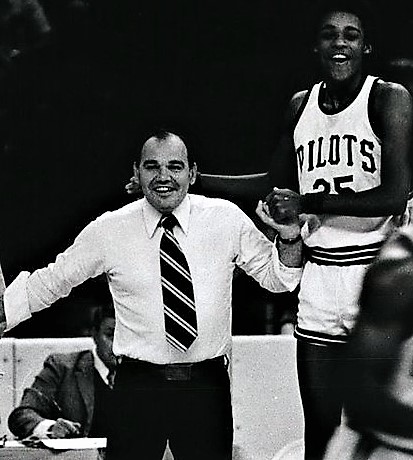 For what its worth, I too will share stories involving Jack. First and foremost, he was a tough coach. When you watched an Avina coached team, they played hard and generally played smart. I was present at a practice of the team my freshman year when a particular player was not practicing with the enthusiasm Jack thought appropriate; Jack approached the player and shared his opinion, with some pretty strong adjectives. Those more familiar with the profession might think that such encounters were not unusual, but I can say that all these years later I remember that moment as though it were quite recent. I learned something about Jack watching that.

Jack played on an intramural team, I believe called Staff Infection. I reffed games through high school--and did other things too--but I used to get asked a fair amount to ref games when I was at Howard Hall. Jack was fouled on one of his shots, which I called. Initially I thought Jack had shot after the foul, while being set outside the key, So I called the foul, but ruled the basket no good. Jack gave me the eye. I have thought about that call for some time: Jack was right, I got it wrong. To no one's surprise Jack could give you the eye.

About a month later, I was in the T-Room with my then girlfriend, an education major. Jack set us down in one of the booths and spoke to us for 30 minutes or so, asking about our plans. It has been so long ago, but I am almost sure Jack picked up the check. What I know is that he was utterly gracious. I still appreciate greatly Jack Avina, who I basically thought was something of a celebrity, taking the time to speak with me and my girlfriend.

I wrote a few articles for the Beacon and interviewed Jack for at least one of them. Always a pleasure to deal with.

There are folk in this community who thought quite highly of Jack Avina, I know I did and do now.

I do not how many saw us play the Beavers at the Coliseum. I was in grad school and came to Portland to watch. I think the Beavers, with Radford and Blume, Charlie Sitton and Steve Johnson, were rated #6 at the time of the game. Ravio, Cook and Slaughter were fun to watch that night. Truly one of the most enjoyable games I have seen.

wrv wrote:I do not how many saw us play the Beavers at the Coliseum. I was in grad school and came to Portland to watch. I think the Beavers, with Radford and Blume, Charlie Sitton and Steve Johnson, were rated #6 at the time of the game. Ravio, Cook and Slaughter were fun to watch that night. Truly one of the most enjoyable games I have seen.

This has always been one of my favorite Pilot athletics pics! Been thinking about getting it printed and framed for my new home office. 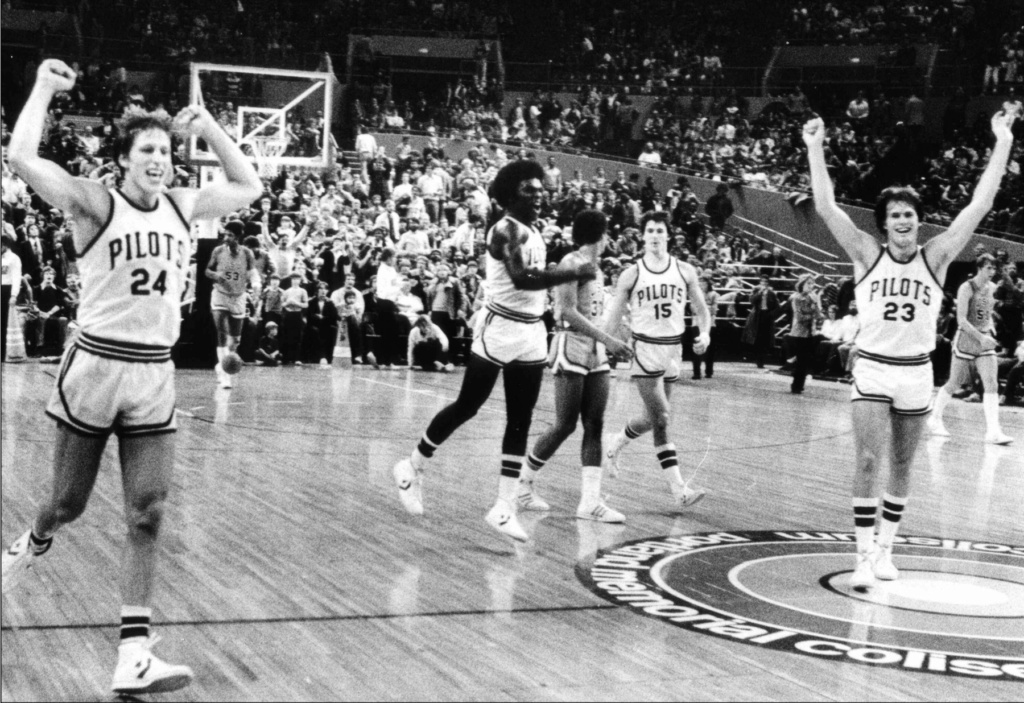 What's the story behind that game at the Coliseum? OSU was ranked #6 but by the looks of that pic, the Pilots won??

Dean Murdoch wrote:What's the story behind that game at the Coliseum? OSU was ranked #6 but by the looks of that pic, the Pilots won??


Yup, a highlight experience for long time Pilot fans. I still remember the UP fans in the lower corridor of the Coliseum, where the hospitality room was, in ecstatic disbelief of what they had just witnessed.

What year was it?

“Ecstatic disbelief of what Pilots fans just witnessed” kind of describes what my feelings were when Joseph Smoyer came off the bench to lead the Pilots to a double overtime win over UT Rio Grande Valley a few years ago, this generation of Pilots fans needs a modern day Jack Avina to lead the program to some new heights!

Love a good history lesson, thanks!

The picture is great, includes Russ Dwyer, our 6'6" center, if that, and apparently Bill Krueger about to shake hands with Mark Radford(?).

As was mentioned earlier, Jack's Portland legacy is not only about his accomplishments here as a coach, which, by the way, include raising this program to success from a pretty bleak beginning, but also include his aiding and directing the young men he coached in their young lives. When Jack began as coach we had Howard Hall as our home court: comparable to an average high school gym. We were not members of the WCAC: Jack was instrumental in raising the profile of the program and helping our transition into the league and by doing so helped obtain funding for the Chiles Center.

The team the year before we beat the Beavers was also good--think we beat California there; I know we beat Seattle, which was always a dogfight.

That is an awesome photo Stonehouse. Get it printed and framed, absolutely! RIP Jack. As most who have followed the program over the decades, Jack was not treated well or fairly by the then administration towards the end of his tenure. But he will always be the essence of Pilot basketball - tough and gritty. He will be missed by so many.