After a successful weekend at home, we find ourselves with a sliver of room over LMU & Pepp, and knocking on the door of SCU and USF: 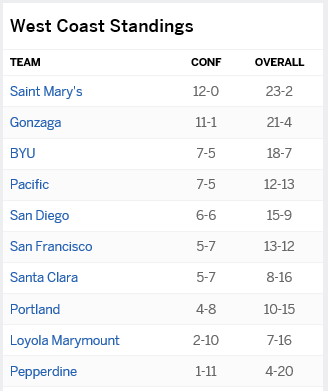 We have SCU visiting Chiles Center next week, but we have a great opportunity to catch up to USF on Thursday in SF.  The Dons' 5 conference wins are @UP, @Pepp, Pepp, Pac, @SCU; 7 losses are @USD, BYU, @LMU, GU, SCU, @GU.  That win @PAC is looking pretty good.

USF shot the lights out during their visit to Chiles Center, while the Pilots really struggled in their worst outing of the year.  The Pilots have improved all around since that game, so it will be interesting to see how this plays out.  Lets hope the team can seize the opportunity and keep moving up...

PilotNut wrote:USF shot the lights out during their visit to Chiles Center, while the Pilots really struggled in their worst outing of the year.

More to the point, one guy in particular, #0 Souly Boum, a freshman guard shot lights out, scoring 26 points in 29 minutes. And while Boum is the Don's leading scorer, he's averaging 12.6 ppg.

And again, more to the point, after that late December loss to the Dons, I wrote,

I haven't seen all of UP's games since I started watching in 1962, and I have seen them lose by greater margins, but last night's performance was one of the most disjointed, disappointing, and hapless performances I've witnessed.  In no way do I lay the blame on one individual or coach....everyone shares in this together.

USF beat the Pilots by 23 points in the Chiles Center, and most are predicting the Dons will win by 10 this coming Thursday....we'll just have to see how the freshman perform in their first game in War Memorial Gym....

Boum played 7 minutes and scored 6 points in the win over SCU Saturday. He's only scored in double figures one of their last six games. Ratinho has been a key player for them lately. Their 6'-11" C Poulson got 14 against UP last time, but has only scored 21 points in ten games since then, not playing at all in two of them.

Their 2 point win over a 20-4 Nevada right before Christmas is the shiny spot on their resume.

DoubleDipper wrote:...most are predicting the Dons will win by 10 this coming Thursday...

The line before the game at San Diego was -13. I would take this bet with how we are playing right now.

Well, it's put up or shut up time for the Pilots. Last week we beat the two teams below us in the standings -- barely, and at home. Our next three games are against the teams in the tier above us. These games will show if we belong firmly in the bottom three, alongside Pepperdine and LMU, or if we are in the mix with the WCC middle-dwellers.

If the hoped-for trajectory for the program is to get to the middle of the conference soon, and then compete for the top after that, it would sure be nice to make the jump to the middle sooner rather than later. These next three games will demonstrate whether we can compete with the middle rung now, or if that step is still another year off (at best).

The two games this week seem particularly important, and could really determine our fate for seeding in Vegas. Best and worst case scenarios for the week...

BEST. If we beat San Francisco on Thursday, and Santa Clara loses at BYU, we'd then be in a three-way tie for 6th place with the Dons and Broncos. Saturday then looks like a golden opportunity. USF is at BYU (a likely loss) and SCU hosts USD. If we beat Pacific, we could be alone in 6th place with a 6-8 record. Or, if SCU managed to beat USD at home, we'd remain tied with them and then play them in our next game the following Thursday. Splitting our final four games would then likely get us a first round bye in Vegas.

WORST. We lose both games and stay mired with LMU and Pepperdine at the bottom of the standings. Even if we beat SCU and Pepperdine in the last two weeks of the season, we'd probably finish in 7th or 8th place.

Disappointed to see the games are only on TheW.tv. I have conflicts Thursday, and was hoping to be able to DVR the game.

thew.tv does the DVRing for you: http://www.wccsports.com/ot/archive-events.html

Thank you very much...that is a great feature I never noticed. Now I have to ignore my cellphone score alerts

for the game and can watch it at a later time.

As far as the game with SF goes...I hope the Pilots keep it close early...It will be interesting to see if there has been some growth and maturity in our young players. Especially since the first game was a blowout from early on.


Forgot about that. Thanks.

Fair warning, there doesn't seem to be any predictable schedule by which the archived games are actually available for viewing. It seems like it's usually not until the following day.

This is a horrible start. USF’s defense has limited us to, I think, one desparation 3-point heave at the end of a shot clock in the first four minutes. One shot.

Good start, Pilots. At the under 16:00 media timeout, our possessions:

The Dons are making it impossible to shoot threes and forcing us to go inside where they know we are weaker. Good planning by them.

Bad start, a little better now 14-9, as bad as the Pilots look at least their hanging around at the under 4 timeout.

After this first half, I just hope we can win ugly...

What a turnaround in those last 8 minutes of the half! Only down by 2 at the break. Didn't see that coming. We got a lot of defensive stops, and committed fewer turnovers. We had a lot of chances to do even better on offense, but I'll take it!

Shaver needs to cool it with the hero ball wild spinning layup attempts.

NoPoNeighbor wrote:What a turnaround in those last 8 minutes of the half! Only down by 2 at the break. Didn't see that coming. We got a lot of defensive stops, and committed fewer turnovers. We had a lot of chances to do even better on offense, but I'll take it!

Shaver needs to cool it with the hero ball wild spinning layup attempts.

The difference in this game is one lazy inbounds pass....

You're going to turn it over during a game and that's fine, but you shouldn't turn it over on a lazy inbounds.

Needed 3 points to win tonight. The difference between the Pilots being in 4th and being in last now stands at 11 points. A lot of close games this year.

BLAST! So close, yet somehow it never felt like we really had a chance. The door was wide open, and we couldn't walk through. Shaver ended up with a great game. Let's hope the guys aren't too demoralized by this one.

On a positive note Shaver and Jo Jo had some good moments, along with Diabate...