Spoke briefly with Coach French this evening before she leaves for Florida in the morning, but as she was on the MBB radio halftime show tonight, did anyone here listen to her interview, and did she have anything to say about who she is hiring?

Well, as apparently no one is fessing-up to hearing Michelle's halftime interview from last night MBB game, I can say I had a quick "hallway" conversation with her last evening, before she headed to Florida this morning, and without her saying so directly, it would seem Rachael Rapinoe will be the next Director of Women's Soccer Operations.

As some may recall, Rachael was at Michelle's introduction at the HOF Room just after she was hired, and she was one of the many alums who rallied around the school, and Michelle in particular, during the transition of coaching staffs.

If it is as it appears, Welcome Back to the Bluff, Rachael!

Welcome Dominic and welcome back Rachael!

Excited to have someone like Dominic who knows the region well and has been on the ground doing D1 recruiting for the past few years.

She didn’t. I believe he was back at Linnfield.

Robb Barts took his place on the staff after he left SJSU.

She didn’t. I believe was back at Linnfield.

Robb Barts took his place on the staff after he left SJS.

Rob Baarts, who apparently did not interview for the UP top job, has left Lauren and SJS. and is now the Women's Head Coach at New Mexico State....

(Doty was not back at Linfield, but was running his own sports performance company in the local area and doing some work for Nike before coming to UP.)

Well that was sudden for Rob.

Good luck to him.

She didn’t. I believe he was back at Linnfield.

Robb Barts took his place on the staff after he left SJSU.

Ahhh! That makes a lot more sense. I mis-read the release.

With Frenchie and Dom recruiting in Florida, it's been pretty quiet around the women's soccer office, but the rumors still persist the second assistant will be primarily working as a defender and goalkeeper coach....something many of us have advocated for sometime.  If you're not scoring in big numbers, you'd better stop the other team from scoring!

High on the list should be Cal grad and longtime soccer assistant, Maite Zabala.  Some might remember her as the associate head coach at USF for a number of years after playing professionally and coaching at Cal.  Last I heard she'd gone home to Boise, but I could swear it was her I saw in the UP parking lot this week.... 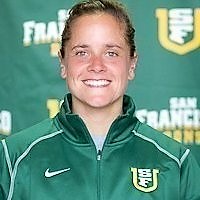 DoubleDipper wrote: Last I heard she'd gone home to Boise, but I could swear it was her I saw in the UP parking lot this week....

Speaking of photographers, thanks to the UP Museum (located in the basement of Shipstad Hall), here's the earliest known Beacon picture of freshman Michelle French taken in 1995: 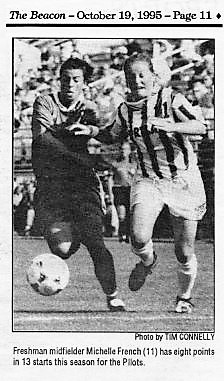 There's better access now that the Beacon is online only, but those 12-page print Beacons were a much better source of discussion in the Pilot House...back in the day.

She joins the Pilot women's coaching staff from Boise State, and will focus on goalkeeping. Prior to Boise State, she was at USF for several years and at Cal (her alma mater, where she played GK in the late 90s).

DoubleDipper wrote: Last I heard she'd gone home to Boise, but I could swear it was her I saw in the UP parking lot this week....

Well no, it wasn't me, but apparently it was Maite.

Somebody please give her a UP shirt to replace the Boise State shirt she's wearing in the UP article!!

Still no mention of Rachael coming back to UP as Director of Operations....maybe it didn't happen after all.

DoubleDipper wrote:Still no mention of Rachael coming back to UP as Director of Operations....maybe it didn't happen after all.

It's not happening, but what is happening is even better.

As most know, the DOSO cannot assist in coaching, but volunteer assistants can, and Rachael Rapinoe will be a volunteer assistant working for Coach French, while still acting as CEO if Rapinoe Soccer Camps LLC  and apparently working with Elite Clubs National League.

I just happened to notice that Rachael's and Megan's next Soccer and Training Clinic will be on January 27 in the Beauchamp Center.....sorry, only ages 7-18 allowed to sign-up.

Rachel Rapinoe as a volunteer assistant is officially official: https://t.co/C3jqMoMhsg

Following her recent retirement from professional soccer, 2010 UP Soccer Graduate Ellie Reed is joining the staff as the Director of Soccer Operations.

"The 2010 Academic All-American played for the U-17, the U-20, and the U-23 National Teams, and in 2008 she teamed with fellow Pilots Keelin Winters and Michelle Enyeart to win the FIFA U-20 Women's World Cup.

After college, Reed began her professional career with the Boston Breakers in the WPS in 2011. She spent two seasons with the Breakers before beginning a five-year stint with Seattle Reign FC of the NWSL. Reed also spent a season each playing in for FCR 2001 Duisburg (Germany), Kristianstads DFF (Sweden), and Melbourne Victory FC (Australia)."

Now, in Frenchi's words, "if we can add just one STAR player to the group, the team will continue to grow and get better and attract more stars!

Coach French and her team stopped by Villa Maria a couple of nights ago:

The Athletic Department has revived podcasts, and I think you'll enjoy this 30 minute interview with Coach French, or as she prefers to be called, "Frenchie," a non-Hodgkin Lymphoma survivor and "Swiftie."

Good interview, thanks for sharing.

Listen to one of the best interviews I've heard as Frenchie talks about the USWNT, what she prefers to be called by her players, her time as a player, Clive Charles, and more on the Timbers/Thorns Breaking Lines 40 minute podcast with Richard Farley... 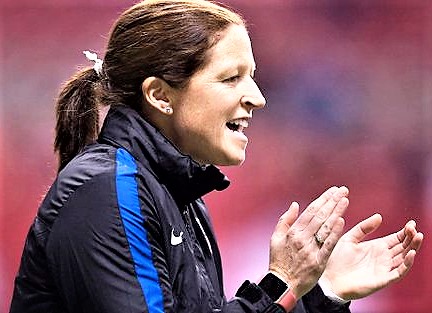