Tough early test on the road for the Pilots, who will still likely be without Jarrel Marshall and certainly won't have him at 100% even if he is in the lineup.

UC Davis took a solid NDSU team to overtime but lost on Friday in their home opener - and really, they gave it away. Were up 9 with under two to go, but gave up a 19-0 run over the last two minutes of the fourth and the first part of OT. Maybe they ran out of gas - only ran an 8-man rotation.

Aggies' only senior Josh Fox took 20 of the Aggies' 48 shots, so the Pilots will likely be game planning for an offence that will run through him. Don't really know what kind of player he is...listed as a 6-6, 215 PF. Wonder who will draw the task of guarding him?

In addition to Fox, UP signee Alec Monson's big brother, junior C Neal Monson (6-10/245) added 14 points and 10 rebounds in the game against the Bison. Both Fox and Monson are JC transfers.....so they know how to play rough/tough basketball.

UC Davis was 14-0 at home last season and won the Big West Conference championship, so the Pilots know they are in for a battle today.

The Aggies return seven lettermen and two starters from last year.  Does that sound familiar?  It should, the Pilots also return seven and two....

Rough one. Thats about all I can say at this point

the good news is that it looks like Marshall played 13 minutes.

The bad new is it didn't help.

Anybody have word on when the links will work on the UP site? No way to link to a sport from the front page.

The offense was ugly today. I suppose that is to be expected for a mid-major team full of mid-major players. There is an inherent lack of consistency in shooting percentages, which we've seen with the Pilots over the past few years. Today, guys were missing easy layups, and missing the wide open three pointers that they made just two days earlier against Oregon Tech. That is frustrating, but really not surprising.

The real cause for concern is the defense and rebounding. Now three games in, it seems like poor defense and poor rebounding are not anomalies (like I hope today's poor shooting was). This will be a long season if the Pilots can't do a lot better stopping dribble drives, closing out on three point shooters, and grabbing rebounds.

The real cause for concern is the defense and rebounding. Now three games in, it seems like poor defense and poor rebounding are not anomalies (like I hope today's poor shooting was). This will be a long season if the Pilots can't do a lot better stopping dribble drives, closing out on three point shooters, and grabbing rebounds.

Not sure if I am right or not, but I do know that it must get fixed to be able to be consistently successful.

I was only able to listen to some of the game, but we only made 1 free throw! We only shot 6! I know at least one of those was Bryce on the front end of a 1 and 1. You can add this to the list of things to fix.

I watched the last 13 minutes of the game.  First take away was there had to have only been ~300 people there outside of the students.  Now for the positives: Pilots only had 11 turnovers to UC Davis's 20.  We only lost by 13 and that is how many more free throws UC Davis made.

Biggest impact I noticed is no offensive impact from the big men down low.  Total of 5 points (2-16) for Taylor, Barreno, Hartwich & Russell. Also only had 4 defensive rebounds.  My expectations for the big men were low this year but not this low.

You are right, turnovers weren't an issue. And though the Pilots were terrible on the defensive glass, their offensive rebounding was acceptable - in fact, UP actually had 20 second-chance points to UCD's 13.

I think the defensive troubles have been documented, but man. 33% on 2-pt attempts? Give credit to Davis for some of that, but improvement on the litany of forced shots and missed gimmes is a necessity to get this ship Piloted in the right direction.

Hesitant to put too much of the blame on one player not being at 100%, but it sure seems like Jarrel is going to be a very key part of the offence over the next two seasons and I'd like to see how this team works with him starting and playing to his potential. Hopefully he'll be close to healthy by the time the Colorado game rolls around.

I couldnt catch the game, was UP running the same offense as last year or in recent years?

Even as one of the ~300 non-students who attended this game, there's not too much to add. Like Terry Cahill said, so many missed shots kept the Pilots out of this one, despite the efforts of Pressley, Tyson and Wintering.

It's early so chemistry hasn't gelled yet, but two huge things the Pilots seem to lack are height and confident physicality, things the Aggies had in spades, which allowed them to be in the bonus for a decent chunk of the second half.

Outside the whistles, they had a scavenger hunt during one of the media timeouts with the relatively simple premise of bringing three items fans/students should have on them (ID, keys, team apparel) to an info booth. Managing the Chiles Center stairs would be a key challenge.  Have there been any interesting MTO events/games over the past few seasons?

No Band-uh! or Drum Squad but a cut-out did make an appearance: 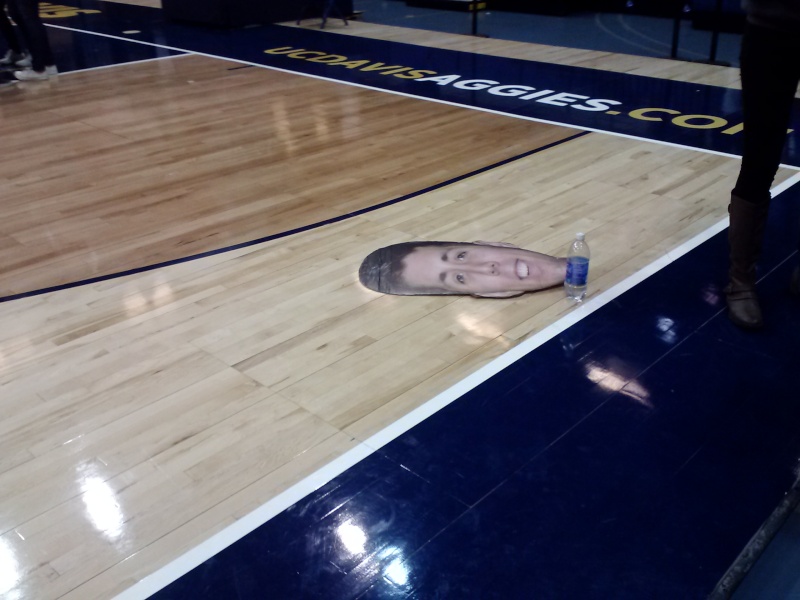 UCD also allows for baseball-style scorekeeping if you're inclined: 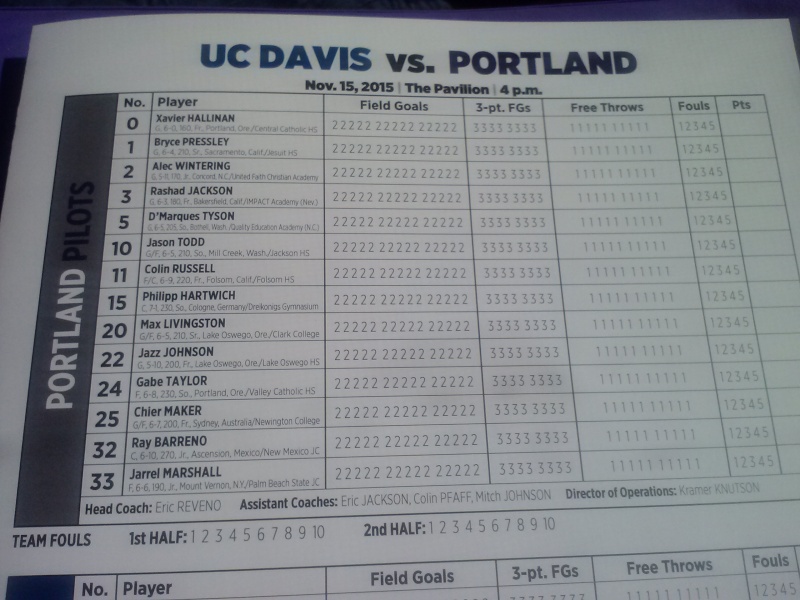 Hopefully this week's home cooking leads to a better result in Boulder!

FWIW- I went to the Gonzaga/NAU game the other night. I will say this about team chemistry and development, it takes time. Yes brilliant deduction on my part

but my point is that if the top team in the league is taking its time putting things together then its not unreasonable that our Pilots are doing the same thing.
Patience is the call of the day and I have faith that the leadership of Wintering, Pressley, and Todd will pull the younger players along.
Hopefully it is a good showing tonight in Boulder and the team continues to work through the weaknesses and builds momentum as the non conference continues.