The justice department lowered the boom on CONCACAF and FIFA corruption today.

These folks were indicted or plead guilty because they used USA banks. Switzerland is opening its own investigation.


Included is the discovery of 100 million in bribes for the 2016 Copa Ametica to be held in the USA.

Soccer is a big time sport in the USA now.

The full indictment is here:


Page 75 names conspirator #5 as a major U.S. Apparel company which funneled 40 million in bribes to the CBF ( Brasil federation). Said company has the apparel contract with the federation.

And Adidas is not pulling its FIFA sponsorship.
http://www.nydailynews.com/sports/soccer/adidas-doesn-pull-sponsorship-fifa-arrests-article-1.2237126

To many of us outsiders FIFA has appeared laughingly corrupt for a number of years, but like most, I figured it was just considered by the authorities to be an accepted way to conduct international business.

So many indictments and accusations, and yet the FIFA boss had no knowledge of the corruption....????

This would appear to be a long time coming...

It's got a concacaf and comnebol lean because the indictments are for things that happened on USA soil. Concacaf hq is in Miami.

But several of those folks were FIFA board members, including Blazer, Webb, and Warner. It seems clear they will be used to get other charges on other FIFA officials. 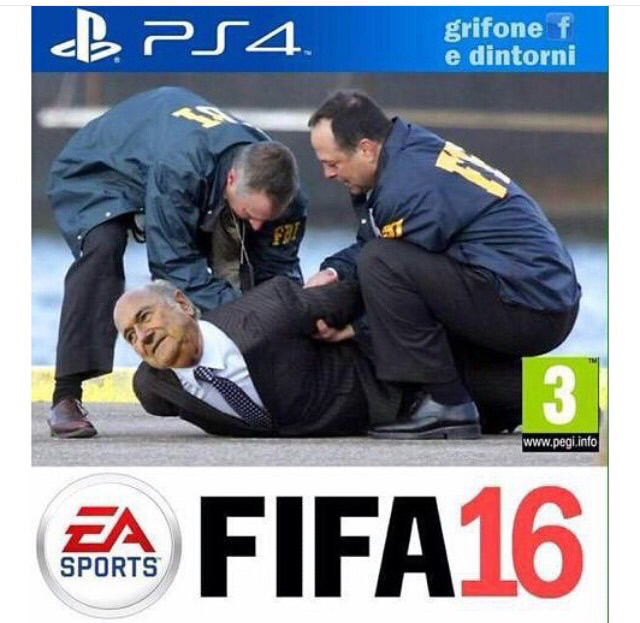 The New Yorker has breaking news... 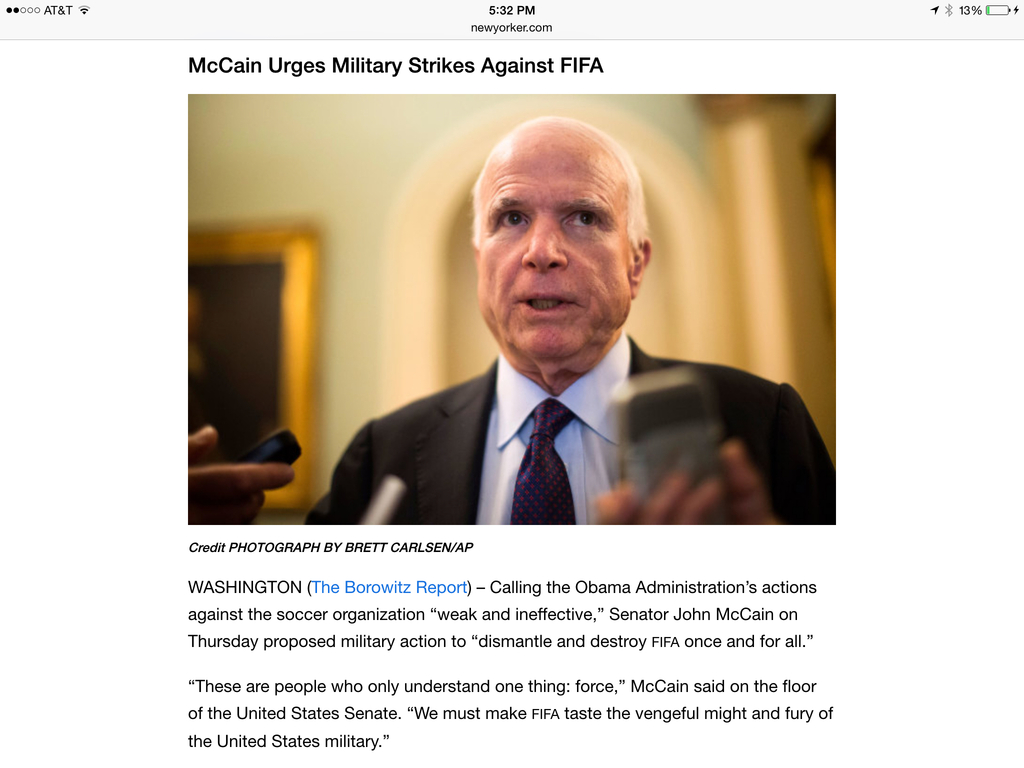 Boots on the ground in Zurich

What is McCain's end game?

FIFA countries will welcome us in the streets with open arms.

Sounds a bit ambitious, but I support him all the way.

Pretty obvious those are Americans making the tackle; Europeans know better than to use their hands when they are running around chasing a polka dot ball....

So, is it true the whole affair is being called "the Bicycle Kickback?"

Sepp Blatter wrote:FIFA stands for discipline, respect, fair-play, not just on the field of play, but in our society as well.

Sepp Blatter wrote:  FIFA cannot sit by and see greed rule the football world. Nor shall we

Was that McCain sr. Or Jr. Who said that?

My reaction that corruption is alleged in FIFA:

Sepp's victory speech about bringing the FIFA ship back to the beach is priceless.

With close to 50 indictments so far, most of the football loving Americans I talk to are just glad to see there is finally a high scoring soccer game 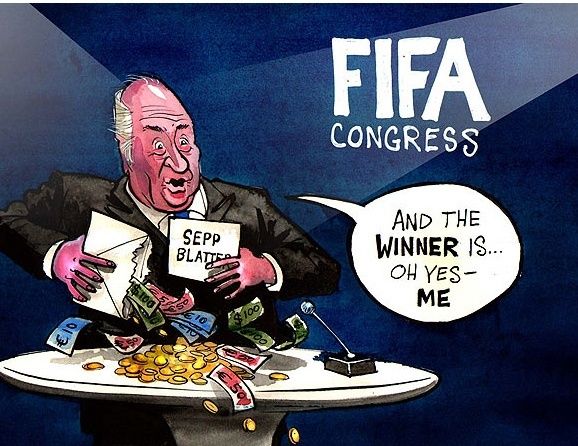 This story is getting better and better.

Today, Jack Warner, one of the indicted FIFA officials, put a video up of himself on Jack Warner TV ( not on my DirectTV channel list) that refutes the charges . At about the 5:30 mark in the video he holds up a copy of an article showing it's all a USA ploy to get the World Cup THIS YEAR.

what he's holding up is a copy of The Onion. 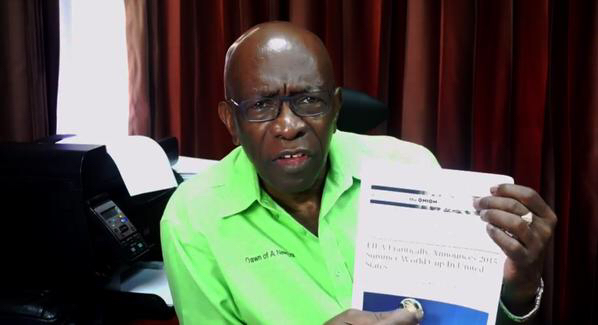 How indicted ex-FIFA VP Warner was fooled by @TheOnion to step up criticism of the US. @AP: thestar.com/sports/soccer/… pic.twitter.com/YhVjeV2hju https://twitter.com/RobHarris/status/605064654516305920?s=17

I knew Jack Warner made Looney Tunes, but this is too daffy. 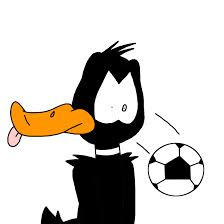 I read the Onion article a few days ago, and although it isn't one of their best pieces, it's still entertaining.

It would appear from the statements made by a number of the indicted officials and one that strangely remains unindicted and still in office, Sepp Blatter, they are for the most part out of touch loony tunes....and definitely daffy.

In addition to Vladimir Putin, it would seem the only supporters Blatter has are those small countries to which Blatter has given a vote and a ton (tonne) of money.

It would come as no surprise if UEFA decides to break away from FIFA unless Blatter steps/falls down within the next year or so.

From England Football Association chairman, Greg Dyke, "This isn't over, by any means."

I assume that like me, most folks can't tear themselves away from this story. It's like watching a car crash loop.

So I'll just post what I think is the best summary of the day for those who haven't kept up.

I heard today that the Trump Tower apartment Blazer kept just for his cats costs $6,000 a month.  He lived in another one that costs $18,000 a month.  And that over that last 5 or so years, he had charged $2.9 million on his Amex card, with a mix of personal and business expenses.

Se$$ Blatter wrote:  “I will call an extraordinary congress and a new president will be elected,”

Although he didn't specify a date for this to happen, a follow-up speaker clarified that it will take four months to call a special congress.

As Blatter will remain the president until such a congress is held, it's hard to tell how long he'll drag this out.

Right now the members are appointed by confederation and apportioned.

UEFA, for example gets 3 vp' s and 5 other  of the 23 members while the other confederations get fewer. 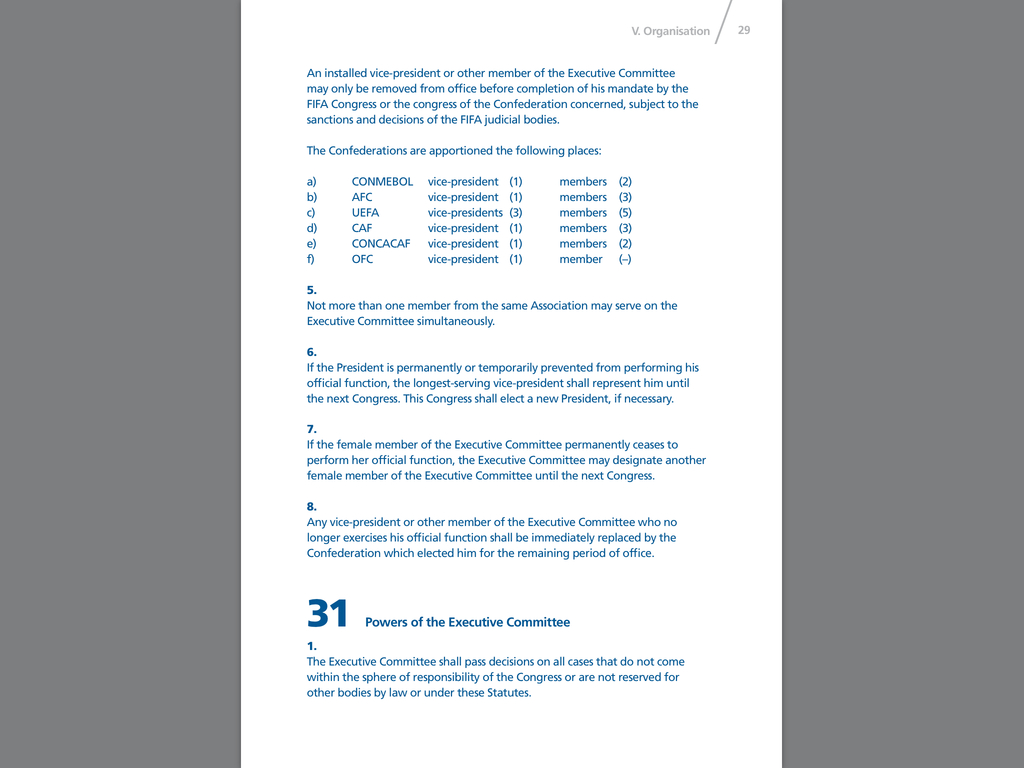