Oh man, that was great!!

Six of us who've known CB since she was a freshman 5 years ago we're literally jumping around helping her make as many shots as possible while watching the competition on ESPN.

After Kevin put up 20 in the championship, I really loved seeing the male competitors going wild watching CB sink her first 9 and beating Pangos without needing to sink the final "money ball."

As the two finalists were Canadian, most of the publicity belonged to that country, but toward the end of the broadcast the broadcasters and CB gave a number of shout outs to Portland and the WCC.

The last participant to be invited to the competition, CB received a call from her coach while in class and soon thereafter headed to the airport to arrive just last night.

A very proud moment for CB, UP, and the WCC....I cannot think of any better publicity going forward on the recruiting trail....and I can't think of the last time I saw six people with tears in their eyes from the emotions of seeing a loved UP student-athlete WIN on a national stage....well, not since the last UP Women's Soccer National Championship.

Nice try. He almost won it all;)

Based on what we saw in Vegas, Chase Fischer of BYU should of been in that contest for the men. 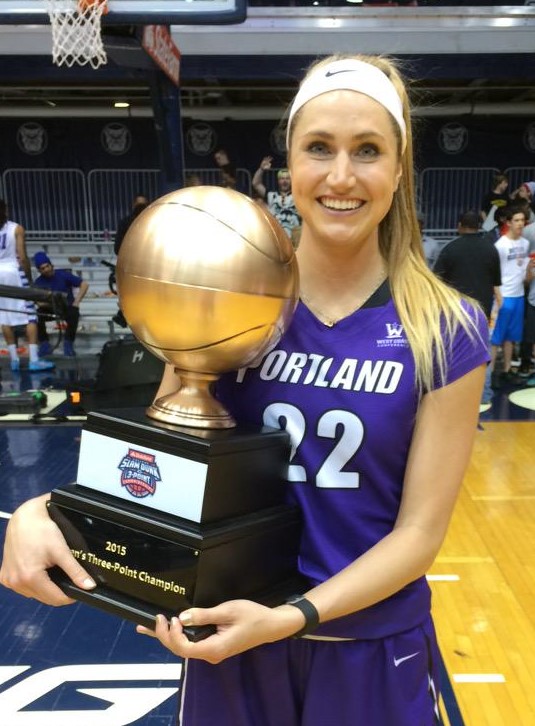 I'm told she also won a trophy as the women's champ....

Directly behind CB in the picture is the easily recognizable SMC senior forward, Brad Waldow.

What I found most funny about the guys immediately after CB won the contest was their awkward uncertainty about giving her hugs.

There were a couple of hugs mixed in with back slaps and high fives....the guys are obviously well trained at treating an athlete like an athlete, regardless of gender.

Guessing the ass-slaps were kept to a minimum.

CTV News wrote:(Cassandra) Brown's father, Robb, said it was "any dad's dream to see his daughter beat the guy in the final."

Brown's parents couldn't watch the competition on TV in Canada, so they drove five hours from B.C. to Washington state to watch it at a sports bar.

Brown's mother, Bonny, said everyone in the bar was celebrating when her daughter won the competition.

"Everybody was screaming and crying and cheering, and she was just knocking them down one after another," Bonny Brown said.

CBC News wrote:(Cassandra) Brown headed to Tampa after the competition for contests aimed at showing off her skills for the WNBA and overseas teams. She hopes to get an agent soon.

She said she's amazed at all the attention.

Those of us who knew of the foot-long bar in CB's chest never spoke of it, but its mentioned in this article....

The article also mentions UP assistant coach Megan Osmer.  Well, Megan definitely stood out in the live coverage of the event as she was the hard-to-miss blond wearing the Portland Pilots shirt and standing with the fans wrapped in the Canadian flag. 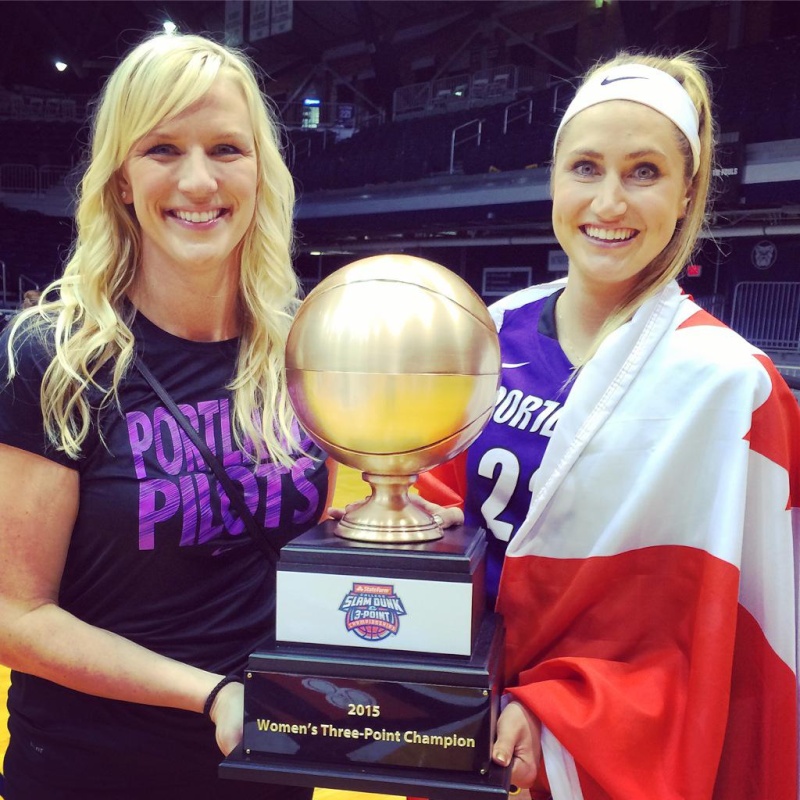 Finally had a chance to check-in with CB:

CB was not originally picked to compete in the 3-point contest. It turns out she was a last-minute choice to join the competition only because the competitor from the U. of Tennessee did not acknowledge her invitation.

CB, who is 22 years-old, said there was a great party with an "open bar" for all the competitors and their entourages after the competition.

It was the biggest (over 7,100 fans), most raucous crowd she ever competed in front of, and she was so nervous she was "shaking" at the beginning, but by the time she got to the second rack of balls she started "feeling it."

She did not have to take the "humongous" trophy through the TSA checkpoint coming back to Portland....instead it was shipped by the sponsor to her home in Vernon, Canada.

She came home with some pretty good swag, including a "PlayStation PS4s and a whole bunch of gear."

CB said, said the WNBA combine and free agent camp in Florida was pretty much a "money grab" by the sponsors of the event.  “It was kind of a waste of time. They had about 100 girls crammed into a gym for 10 hours. You played three minutes, then sat for an hour and played another three minutes.”

CB is talking with pro agents and hopes to nail down a contract later this month. Her wish list includes Greece, Italy and Australia.

DoubleDipper wrote:Those of us who knew of the foot-long bar in CB's chest never spoke of it....

I guess her surgery was public.  This video from a year ago discusses about CB's courageous comeback.

Saw Cassandra at the airport this past weekend and learned she's a member of the Canadian National Team competing in the upcoming Pan Am Games in Lima, Peru.

After playing professionally in Poland and Slovakia, CB has been playing in Greece the last couple of years...and has "really enjoyed traveling througout Europe" playing and helping develop youth players.