Instead of a 125 school BCS , it appears the 65 biggest schools will rule the roost.
You have to wonder what this means for UP. 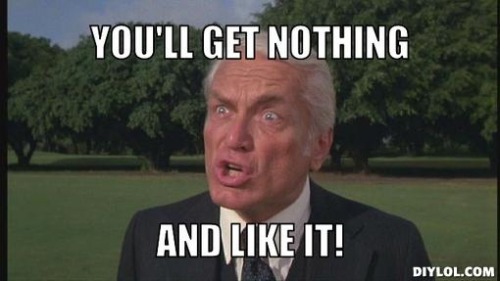 Here is the outline of the new governance model:

And a summary of key changes:


Lots of gobbledygook-Gook, but included is that the 65 teams from 5 conferences would have a guaranteed 38-40% of votes on legislation.

Love how they are crouching it as great representation for Student Athletes. They get 2 votes.

Hey, thats 2 more votes than Guam gets in Congress! Progress!

Two more votes than the citizens of Washington DC get, too.

It's official. 48 schools can now pass legislation that requires 200 schools to override.

.....but all schools remain a member of Division I and student-athletes will have some voice in the decision making.

The new model also grants flexibility to schools in the Atlantic Coast, Big 12, Big Ten, Pac-12 and Southeastern conferences to change rules for themselves in a list of specific areas within Division I. The legislative process for these 65 schools, which could begin as early as Oct. 1, includes three student-athlete representatives from each conference who will vote on rule changes within those conferences.

DoubleDipper wrote:.....but all schools remain a member of Division I and student-athletes will have some voice in the decision making.

2 of 24 votes, selected from students by the NCAA.

The new model also grants flexibility to schools in the Atlantic Coast, Big 12, Big Ten, Pac-12 and Southeastern conferences to change rules for themselves in a list of specific areas within Division I. The legislative process for these 65 schools, which could begin as early as Oct. 1, includes three student-athlete representatives from each conference who will vote on rule changes within those conferences.

Again,  those students are  to be selected  by the conferences.

The autonomy measures will allow the top 64 schools in the richest five leagues (ACC, Big 12, Big Ten, SEC and Pac-12) plus Notre Dame to decide on things such as cost-of-attendance stipends and insurance benefits for players, staff sizes, recruiting rules and mandatory hours spent on individual sports.

That legislation must be submitted by Oct. 1 to have it enacted at the January 2015 NCAA convention in Washington, D.C.

Tom Yeager, the commissioner of the Colonial Athletic Conference, told "The Freddie Coleman Show" on ESPN Radio that the CAA was one of those that opposed autonomy for the Power Five.

"I think the current system can address a lot of the present problems," Yeager said Thursday night. "Our presidents were really entrenched in that, coupled with the feeling also that the autonomy is not going to solve all the issues coming out. So it was more on a philosophical plane, on the absolute commitment to continue to work together to find solutions -- but that we didn't need a complete overhaul of the system to do that, we believe.

"We'll see how it all plays out. It's a little bit of, 'Be careful what you wish for.' Because you're not going to be in a position now as blaming the woes or whatever is inhibiting you from doing whatever you want with all your money. You can't blame it on us anymore. We're not even in the room.”

Several presidents said Thursday that the full cost-of-attendance stipends, which could be worth between $2,000 and $5,000 per player, likely would be the first item taken up after it had been shot down by the full membership three years ago. Four-year scholarship guarantees also are expected to be on the early agenda.

The question for UP and the WCC may be how this will affect our ability to recruit and whether the conference itself will feel the affect of the legislation. How will smaller conferences adapt? Can we afford anything like this legislation by the larger dogs? Can you land a prospective high quality student athlete in the revenue sports without a stipend being promised in addition to the scholarship? I assume the non-revenue sports will remain unaffected: soccer, for one, should see no affect, or so I assume. The quality of recruits in men’s basketball coming to the WCC may be a different story. And, BYU may want to go Big 12 soon to take advantage of its own size and wealth.

The O'bannon ruling moots a lot of that thinking. The judge made it clear that his injunction overrides any autonomy rulings and prohibits the NCAA or BCS conferences  from setting stipends lower than $5,000.


A direct quote from the ruling:

Although the
injunction will permit the NCAA to set a cap on the amount of
money that may be held in trust, it will prohibit the NCAA from
setting a cap of less than five thousand dollars (in 2014 dollars)
for every year that the student-athlete remains academically eligible to compete.  The NCAA’s witnesses stated that their
concerns about student-athlete compensation would be minimized or
negated if compensation was capped at a few thousand dollars per
year.  This is also comparable to the amount of money that the
NCAA permits student-athletes to receive if they qualify for a
Pell grant and the amount that tennis players may receive prior to
enrollment.


I was up until 3:00 AM reading the ruling last night. It seems to throw out half of the NCAA rule book as violating the Sherman Antitrust laws. It is going to take a few more readings to get it all. Some of the implications won't be clear for years, but the autonomy proposal is just a blip compared to this.

It remains to be seen as to whether non revenue sports like soccer would be affected or not. The ruling is based on economics and whether the results would harm college sports or be anticompetitive ( they wouldn't).

But the antitrust issues are still there. Soccer, for instance, might be a revenue sport but for the considerations that hold them down. An open market might mandate that students at least receive full cost of attendance, regardless of scholarship limits.

The trust money for use of an athletes image appears different from the stipends that would go to all scholarship student athletes in the revenue sports. Likely that an athlete whose likeness is used would receive an annual stipend and the trust money at the end of his collegiate career.

Geezaldinho wrote:
I was up until 3:00 AM reading the ruling last night.

Over the first half of 2014, the NCAA already broke its record of yearly lobbying expenditures. During 2013, the NCAA spent $160,000 on lobbying. This year, as of June 30, it has already spent $240,000. That includes $180,000 just in the second quarter, which covers April to June. A new topic appears on every lobbying disclosure filed after March 2014: the “welfare” or “well-being” of student athletes.

Geezaldinho wrote:
I was up until 3:00 AM reading the ruling last night.

Not really. I'm usually up until 3:00AM reading something.

After decades of discussion, the NCAA rules distinguishing college and professional athletes are quickly blurring more. Ducks and others will pay large insurance premiums for the potential loss of value to protect their returning stars who are expected to be in the NFL soon. Of course, there remains no accounting of under the table payments.

The ncaa announced today that student-athletes are now allowed to take out loans to pay for loss of value insurance against future potential earnings.

I suspect the loan would come from the insurer.

This of course raises the question of whether these additional semesters of scholarship benefits would be counted toward the NCAA established scholarship limits, or whether a school could tell players to find ( or make) legitimate reasons after a studen's eligibility is complete, but before he graduates. Fall semester sport athletes could finish " off the books".

And so it begins:

The Dallas Morning News reports that Texas athletic director Steve Patterson announced yesterday that the University of Texas will begin paying approximately $10,000 to each athlete in response to recent court decisions as well as to cover expenses not otherwise covered by athletic scholarships. Patterson said the total cost to Texas would be approximately $6 million a year.

That won't be a problem for the University of Texas to cover.  But what about other schools?  Oklahoma shouldn't have an issue. Nebraska won't either.  But what about schools in the Power Five conferences like Kansas State, Iowa State, and Purdue?

One thing to note is that although Patterson doesn't say it, the math indicates that this isn't just for football or even men's basketball.  $6 million provides a $10,000 payment to 600 athletes, which means that it's likely to be every male and female athlete at Texas. No discrimination between the rowing team and the football team.

The $10,000 estimated amount per players breaks down into two parts: the first is to cover expenses not covered by scholarships. It's things like meals outside the training table and trips home.  So it's an average.  To use an example at Nebraska, Josh Banderas would get less for trips to his parents home across town in Lincoln than kicker Mauro Bondi would receive for trips home to Boca Raton, Fla.

The second part is a $5000 payment in compensation for the university to use his image. That's the amount set by U.S. District Court Judge Claudia Wilken in her ruling on the Ed O'Bannon case. The number may be arbitrary, but it was set by the courts, not Texas.

The way this is written it looks like $15K above current scholarships.

Judge Wilkins seemed to mention $5K as a stipend, not $15K, as I recall.