UP graduate and former Pilots guard Hanna (Seltzer) Howard, now an assistant coach at Fresno St (6-2), brings the Bulldogs to the Chiles Center Friday at 5:15 for the first ever meeting between the two schools in women's basketball.

The game is part of a double-header with the men playing Portland Bible College at 7:30.

It should be prove to be a very difficult game for the young Pilots (2-7), especially with their lack of practice during the just concluded finals week, but it's hoped they'll have some residual confidence carried over from the win over Nevada last week.

The Pilots then make a quick trek to Boise, Idaho, for another contest against a Mountain West opponent, the Boise State Broncos (5-4) on Sunday at 1 pm PST at Taco Bell Arena.

Portland owns a 10-5 all-time record against the Broncos and the Pilots are 8-2 against BSU in the last 10 meetings.

Well, that was a nice surprise. The Pilots pulled off one of the biggest upset in years, beating Fresno State 76-69. After the Bulldogs buried nine three pointers and dominated the boards in the first half I figured the team that went to the NCAA tournament last year and has a roster dominated by transfers and upperclassmen would easily beat the young, inexperienced Pilots.

But the second half was a total turnaround with the Pilots going on a 26-5 run. But then Fresno St. went on a 9-0 run to retake the lead….but the Pilots didn’t crumble, it was the experienced women from Fresno who couldn’t stand the heat down the stretch.

Probably the big game changing player for the Pilots in this game was Alexis Byrd. “Byrdie” scored 12 points and made all six of her free throws and had four steals in her first meaningful action since injuring her hamstring at Louisville in the Pilots second game of the season.

The Pilots have to be at PDX at 6 in the morning to face Boise St. at 1PM PST on Sunday. Their only road win this year was in Moscow, Idaho; let’s hope we get another one in Boise.

Had to pay a few bucks to watch the game today, but it was worth it.

Weary travelers with tired legs, facing a letdown after the upset of Fresno St. on Friday night, and looking forward to being with their families for the holidays….the Pilots had every excuse for losing today against Boise St….but they WON.

The team’s only upperclassmen, Amy Pupa, who will never be a scorer, but tends to be the glue holding the team together, had 10 rebounds and 4 assists. But the breakout game came from freshman Annika Holpainen who had 15 points in 15 minutes. The best all around player on the team, sophomore Kari Luttinen, had 17 points.

Everyone who was suited-up for this game played, and there were smiles all around (including here) for the terrific turnaround the ladies have made after such a miserable start to the season.

Coach Sollars is always concerned these young players won’t remember from one game to the next what they’ve learned, but with no studies until January, and with three days of practice between now and their next game against Oregon on Friday @ 7PM….I think they’ll be ready for the Pac-12 test.

Nice to see them getting some cohesion.

They had an awful fist half a few games ago that made you wonder, but since then they have been starting to look like they can compete.

The honor is well deserved for Kari, and it’s a reflection of the effort by the coaches and Kari’s teammates over the last three games. Let’s just hope their confidence and success carries forward into WCC play.

From the UP Athletic Department:

PORTLAND, Ore. --- It’s been quite a week for Portland sophomore guard Kari Luttinen, who just earned her first ever West Coast Conference Women’s Basketball Player of the Week honor on Monday. Luttinen averaged 17.5 points per game during the weekend as the Pilots picked up a pair of non-conference wins to run their winning streak to three games.

Luttinen scored a game-high 18 points on Friday night, which included hitting four of seven three-pointers, and added five rebounds as the Pilots ended Fresno State’s four-game winning streak with a 76-69 victory at the Chiles Center. Then on Sunday afternoon, Luttinen once again led the way with a game-high 17 points on 6-for-11 shooting to help the Pilots cruise past Boise State 73-49 at Taco Bell Arena in Boise, Idaho. She went a perfect 3-for-3 at the free throw line against the Broncos and was 2-for-3 on three-pointers, which made her six of 10 from deep overall during Portland’s two wins.

Luttinen, a native of Seattle, Wash., leads the Pilots in scoring (12.7 ppg) and she’s averaging nearly 20 points (19.3 ppg) per contest during UP’s current three-game winning streak. She was also named the U.S. Bank University of Portland Student-Athlete of the Week following the weekend.

Luttinen and the Pilots will look to extend their winning streak on Friday when they welcome in-state rival Oregon to the Chiles Center for a non-conference tilt. Tip-off is set for 12 p.m. 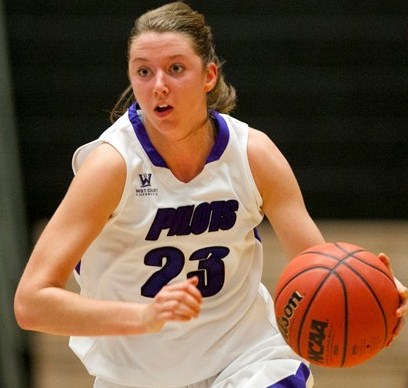