Ussoccer has a nice "getting to know" clip on Steve.

Great to see an American flourishing and thriving in another culture while still allowing his native culture to "come out." For those on PN who have lived in another culture/country for any length of time, I think you'll agree it is a very enriching experience.......it's great to see another UP ambassador (or in this case, Mayor) abroad.

It’s always great to see these articles about our UP Alums. It is pretty obvious from this and past articles that Steve Cherundolo, the “Mayor of Hanover,” is highly thought of in his adopted country.

If anyone ever needs a poster boy for the "steady as she goes" attitude to races, please look no further than the unofficial mayor of Hannover, US defender Steve Cherundolo.

While some stateside observers began politely presuming the right back would fade from view during the 2014 World Cup cycle, the 33-year-old still holds down right back for the national team more than halfway down the path to Brazil.

Cherundolo is also captain at Hannover 96, the club he joined out of the University of Portland more than 13 years ago. It took a few seasons for the club to break back into the Bundesliga and several scrapes with the drop zone followed, but their measured climb now has the American skippering a Reds side enjoying the pressure of raised expectations.

"It's great to be able to play these types of games toward the end of my career," Cherundolo told MLSsoccer.com by phone on Tuesday from Germany. "It's much more fun to play in the upper half of the table, and certainly to play in Europa Leagues. It's a great change of pace compared to a relegation battle every year."

Read the entire article from MLSSoccer here: Mayor of Hanover

Steve just passed a milestone and is about to pass another. He now has 299 first division matches under his belt, which is a record for players from Hannover 96.

In the next match he plays, the Mayor of Hannover/Captain will become only the 4th player in Bundesligue history to play 300 matches in the first division.

Here is an interview on USSoccer.com from a couple of days ago

From Soccer by Ives:

A day before Hannover 96′s final game of the season against Fortuna Dusseldorf, right back Steve Cherundolo signed a one-year extension with the club through 2014. The American international, who holds 87 caps, broke the record this season for all-time appearances in the Bundesliga with the club, now sitting at 299 matches. 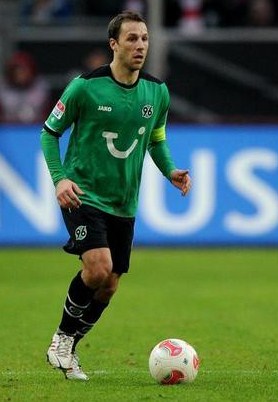