This is an interview with Christine from the NBC Olympic website. It is a little disjointed because they cut out the questions and only included her answers.

PROFILE: Sinclair is widely recognized as the greatest player to ever come out of Canada. She has spent the last 12 years with the Canadian team, participating in three FIFA World Cups (2003, 2007, 2011) and the 2008 Olympic Games. Amongst her individual accomplishments are 127 goals in 171 appearances and a “Top-5 Player in the World” status for the last decade.
Besides winning a gold medal at the 2011 Pan American Games, one of the most memorable moments of Sinclair’s 2011 campaign was the free kick goal she scored against two-time defending champion Germany in the opening match of the 2011 World Cup. In front of 73,000 German supporters (with a broken nose suffered earlier in the second half), Sinclair curled a perfect free kick over the wall and into the corner of the net.
At the age of 29, Sinclair is Canada’s all-time leading caps and goal scorer (at 134), and the reigning and seven-time Soccer Canada Player of the Year. Five times she has been nominated as the FIFA World Player of the Year.
Sinclair hails from Burnaby, B.C., and played most recently for Western New York. She played her college soccer at the University of Portland, where she set an all-time Division I goal-scoring record with 39, was named “Academic All-American of the Year” by ESPN The Magazine, and won The 2005-2006 Honda-Broderick Cup as the collegiate “Woman Athlete of the Year.”
CLUB:
WNY Flash
LANGUAGES SPOKEN:
English
IDOLS (IN SPORT OR OTHER):
My mom, she has been through so much. Yet, she always has a positive attitude and has supported me through everything.
FAVOURITE ACTIVITIES OUTSIDE OF SPORT:
Skiing, Golf, Listening to music
SIBLING(S) NAME(S) (DATE OF BIRTH):
Michael Sinclair (26 years old). He Plays baseball in Burnaby.
PRE-COMPETITION RITUALS / SUPERSTITIONS:
Have to listen to Michael Jackson, everything goes on Left first
TRAINING LOCATION(S):
Buffalo
COACH(ES):
Aaran Lines
SENIOR NATIONAL ATHLETE SINCE:
2000
NICKNAME (S):
Sinc
COLLEGE/ UNIVERSITY (YEAR GRADUATED):
University Of Portland (2005)
FOCUS OF STUDIES:
Biology
OTHER SPORTS PARTICIPATED IN:
Basketball (high school level)
FAVOURITE MOVIES / TV SHOWS:
Greys Anatomy
IT WOULD SURPRISE YOU TO KNOW THAT I …:
can solve a rubix cube
NATIONAL TITLES (INCLUDE EVENT, YEAR):
2002 and 2005 National champions in NCAA – University of Portland
PAN AM GAMES RESULTS — ALL EVENTS, ALL GAMES:
Rio – 3rd place
WORLD CHAMPIONSHIP APPEARANCES – BEST RESULTS BY YEAR:
2003 – 4th place at World Cup
2002 – Silver medalist at Under 19 World Cup
MAJOR AWARDS (EX. CDN PLAYER OF YEAR, HALL OF FAME INDUCTEE):
5-time Canadian Player of the Year. 4-time Nominee for FIFA Women’s World Player of the Year 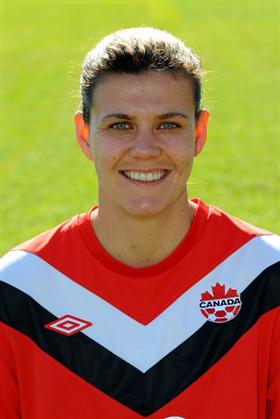