WASHINGTON – The long, slow march toward a major college football playoff is over. It has been approved.


Gerald Herbert, AP
Conference commissioners met with an oversight committee of university presidents and chancellors in Washington Tuesday afternoon to approve a four-team national playoff plan, consisting of two semifinal games in bowls and a national championship game that will be put up for bid.

Conference commissioners met with an oversight committee of university presidents and chancellors in Washington Tuesday afternoon to approve a four-team national playoff plan, consisting of two semifinal games in bowls and a national championship game that will be put up for bid.


Conference commissioners met with an oversight committee of university presidents and chancellors here Tuesday to approve the four-team seeded playoff, consisting of two semifinal games in bowls and a national championship game that will be put up for bid.
Commissioners presented the plan for 30 minutes then took questions from the presidents, who then deliberated for about three hours before announcing their decision.

"A four-team playoff doesn't go too far," said Virginia Tech President Charles Steger, chair of the presidential oversight committee. "It goes just the right amount."
The 14-year reign of the Bowl Championship Series— and the persistent criticism that accompanied it — is finally near its end. The new deal will go for 12 years.
"This was timely, had to be done," former Big 12 interim commissioner Chuck Neinas said before Tuesday's meetings began. "(It was in) response to the public, response to the interest in college football. The BCS has done a great deal in helping promote college football, and there's a general feeling we need to do something better to determine a national champion."
The presidents also endorsed the concept of the semifinals rotating among six bowls.
"We do not know the rotation yet," said BCS executive director Bill Hancock. "That's still to be determined."
And they endorsed the idea of a selection committee for the playoff teams, which would end the combination of computer and human polls that have been lightening rods for criticism since the BCS began.
The committee will rank playoff teams based on: won-loss record, strength of schedule, head-to-head and if a team is conference champion.
"I think generally, each conference will be represented," Hancock said of the selection committee. "There's a lot of work to be done on that. I think a model will be the NCAA (basketball) selection committee. We would be well-served to use that as a model.
"I think strength of schedule is going to be a very important part of this. Who did you play? Where did you play them? How did you do? I think you are going to have to play a good schedule in order to make it into a playoff."
Jeff Sagarin, who does computer rankings for USA TODAY Sports and has been part of the BCS formula since the beginning, argues that strength of schedule already exists.
"The media and commissioners are talking about needing to bring back schedule strength into the mix," he said earlier this week. "Well, it's in the very DNA of any competent computer program because the basic idea of every such program is conceptually: RATING = ACHIEVEMENT (W-L, scoring margin, etc) + SCHEDULE STRENGTH (opponents, game locations)."
Current BCS contracts run through the 2013 season, so the playoff would go into effect after the 2014 season.
Still to be decided: the name of new event, the composition of and procedures for the selection committee and the revenue-sharing formula. A new TV deal will be negotiated, as well.
According to the BCS release, the semifinal games will be New Year's Eve or New Year's Day with the title game roughly a week afterward depending on the calendar. The idea is to create a "Championship Monday."
"I'm glad to see it, quite frankly," said former Georgia coach and athletic director Vince Dooley at the national athletic directors convention in Dallas. "It's something that needs to be done. The BCS has had, I think, too much controversy. You can always have some controversy, but this was a lot of controversy - Auburn being a classic example (finishing unbeaten and shut out of the national championship game in 2004). I think this will help to solve a lot of it, and also be productive economically to a lot of schools."
Dooley was part of the NCAA's last serious look at a playoff, in the mid-1990s, and a member a special committee that weighed the issue and decided in 1994 that there wasn't enough support to recommend a postseason tournament. This came after then-NCAA head Dick Schultz called for a playoff at the NCAA convention.
Dooley likes the idea of four teams but worries pressure will come to expand.
"I'm hoping it'll never move beyond (four)," he said. "That's why I was in favor of a plus-one (in the '90s); I thought that was the best way (to go) and it wouldn't move beyond that. Four is a little more dangerous in that respect, and it could happen. But I hope it never does. Because then, where do you go from there?

I thought Delaney was against a playoff? Oh, maybe he's just against it when small market schools might be allowed in.

pilotram -- how are you doing? Internet, tv, and newspaper reports paint a pretty bleak picture in your area. Thinking of you and praying for the best of outcomes. (I'm posting this instead of messaging you because I'm sure others are concerned too).

Oh goodie, now the bet student athletes of the best programs get 2 several extra weeks to pick up minor concussions and further symptoms of chronic traumatic ecephalopathy all for our corporate financial gain, er, I mean the fans!!

DaTruRochin wrote:Oh goodie, now the bet student athletes of the best programs get 2 several extra weeks to pick up minor concussions and further symptoms of chronic traumatic ecephalopathy all for our corporate financial gain, er, I mean the fans!!

Chronic traumatic encephalopathy sounds a lot better than getting your brains beat in....

I'm having trouble deciding if this is progress or just another 12 year stall.
It was pretty clear that the BCS system wasn't working, to the point where the lawsuit threats for restraint of trade or whatever they could come up with were getting pretty loud.

A four team playoff is one more game. And there isn't any provision for reducing the regular season games. So what has it accomplished?

Well, for students, one more game's exposure to injury and one week less when programs can pay the attention to academics the Presidents commission says they want.
And I don't see any language yet that says that teams not from one of the ruling conferences will get a fair shot at the title.
BYU, Boise State, and Fresno State don't seem any closer to the piece of the pie, even if they change conferences.

Oh yeah, there is one more paycheck for NBC and the bowls and the folks that get automatic BCS bowl invites.

Not only 1 more game to pick up an large, dramatic full speed injury, what about the linemen who risk injury colliding with the person on the opposite side of them on each and every "innocuous" play of every practice?

Seems to me this is just compounding the corporatocracy of college football, all on the backs of players not even paid in the process of risking injury. (Yeah they do get a "free" education, but with their football commitments you can hardly say it is the same as their fellow students...)

Can I ask what makes this playoff more dangerous than a high school football playoff? That increases the risk for injury and takes students out of the classroom, but nobody complains about that.

DoubleDipper wrote:pilotram -- how are you doing? Internet, tv, and newspaper reports paint a pretty bleak picture in your area. Thinking of you and praying for the best of outcomes. (I'm posting this instead of messaging you because I'm sure others are concerned too).

Thanks. I'm fine. Just had to endure 10 days or so of smoke in the city. It was like sitting next to a campfire, and you couldn't escape. I think people saw this coming, and it has been a perfect storm of a mild winter, dry spring, beetle killed trees, unseasonably hot weather and high wind.
Although there have been many homes lost here, I'm more concerned for the Springs area. Saw one of these pics on Facebook courtesy of Mrs. Mattywizz. Looks like something out of the apocalypse: 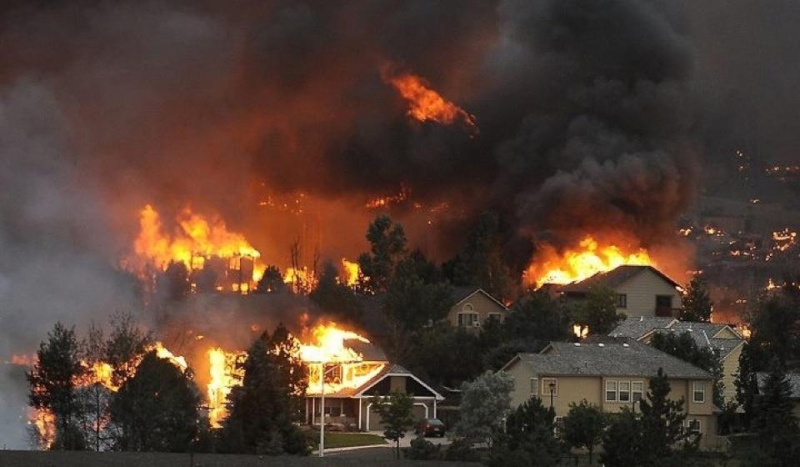 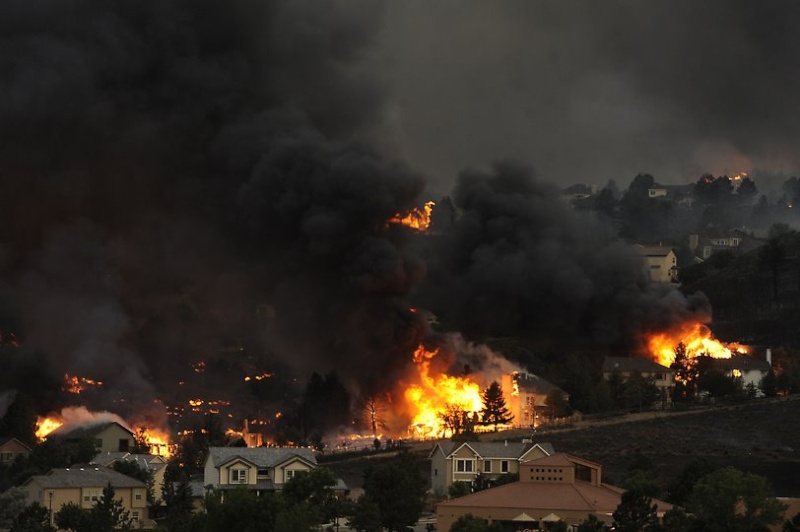 It's going to be really bad one of these years when Summit County catches fire (where a bunch of the ski resort towns are). There are very few live trees up there.

Hang tough, man. Fingers crossed, but you're always welcome back in the moist NW if you need refuge (sorry, I can't offer a job too.)

Many of my Air Force friends and families are on C. Springs; some have lost everything. Too sad for words.

RipCityPilot wrote:Can I ask what makes this playoff more dangerous than a high school football playoff? That increases the risk for injury and takes students out of the classroom, but nobody complains about that.

I'm taking a wait and see attitude. Depending on what attributes the selection committee favors, we may see far fewer meaningful regular season games.

I also expect there will be a very high percentage of "corporate fans" vs. regular fans at the championship game, ala the NFL's Big Game with the copyrighted name.

I remember watching a game awhile ago in which a concussion-prone player was given a special helmet which was supposed to be much more protective of the head. I kept wondering.....why don't they all use this helmet?

Because when you lead with your head, it doesn't hurt the other guy as much?

They need to move the championship game up too. Make it all end sooner and stop with this one month between games business. It should go back to January 1st as far as I'm concerned, but I'm sure some of you remember times when the final game was in December.

Classroom issues (partially because I acknowledge that another game is more time away from the classroom, but moving up the dates and decreasing the between time does put kids in the classroom more so in the end) fixed.

But ESPN needs the extra weeks to hype up the bowl games.

pilotram wrote:But ESPN needs the extra weeks to hype up the bowl games.