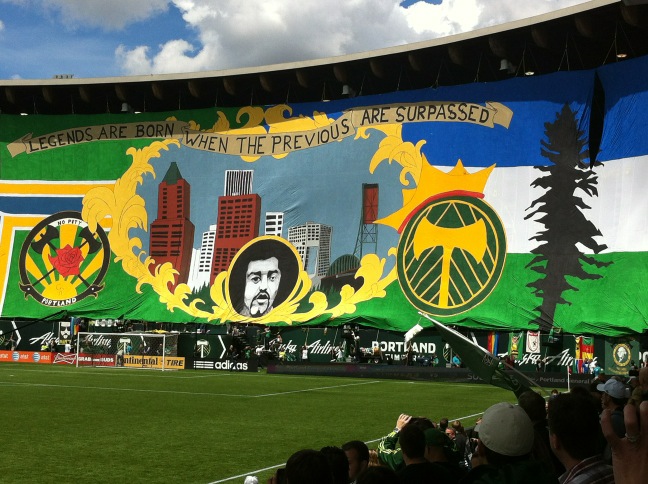 Excellent first half for the Timbers, and they held on for the win 2-1!

Great pics from the Oregonian, after Horst's goal: 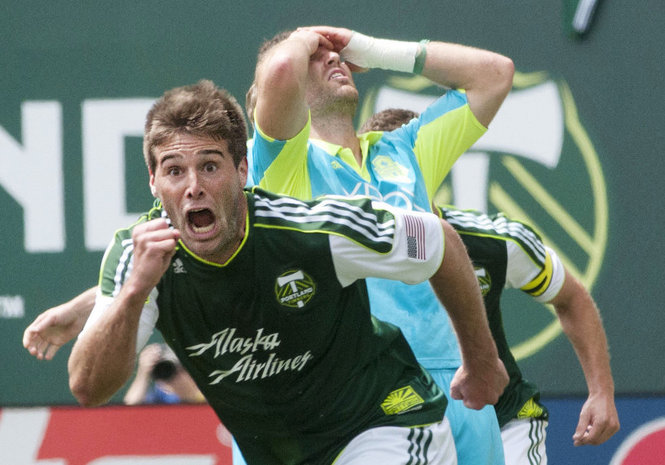 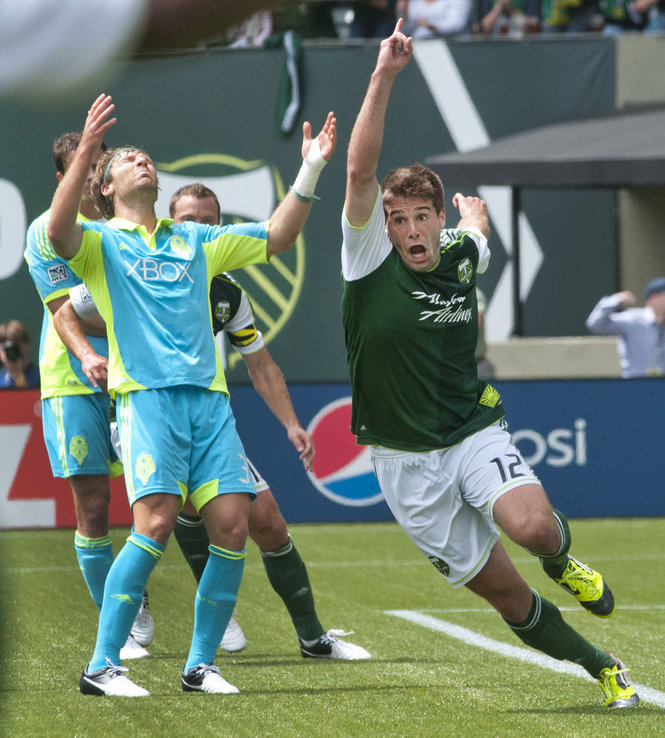 I'll wait to hear a report from someone who was actually there, but from what I saw on the telly, some of the unsporting conduct at the end should not only result in red cards, but $$$, and time off. Or is that kind of conduct just standard stuff in this league?

Bring on the Olympic Games!

The bust-up at the 90' mark had been brewing all day, really. Lots of attacks at both ends wound up with fouls. Guys just got frustrated. Also goes to show this is just like any other derby. Things get intense.

As for disciplinary action, I have to be blunt and say I'm in favor of anything that keeps Lovel Palmer out of action. The referee did us a solid with that one.

I have a question about him and Montero.

These guys are professional, right? I mean, they are allegedly paid to do good things for their teams, aren't they?


They surely aren't being paid act like selfish schoolyard morons.

Palmer especially. You just got rid of one of their best scorers and are a man up, and the best thing you can figure out to do for your side is to level the head count?

DoubleDipper wrote:I'll wait to hear a report from someone who was actually there, but from what I saw on the telly, some of the unsporting conduct at the end should not only result in red cards, but $$$, and time off. Or is that kind of conduct just standard stuff in this league?

It was a total melee and hard to follow. Everyone was on such a high after seeing the referee tell Montero that no did indeed mean no. The euphoria in no way subsided upon learning that Palmer would no longer be playing today.

The league just suspended Mosquera three games for similar conduct in the LA game last week. If the league had any consistency in dishing out punishment, Montero and Palmer should see something similar. Then again, "Water Bottle" Nyassi didn't see any missed time for attempting to excoriate Perkins's face in Montreal.

I was at the game. If Geez what at the game when that picture was taken and that was his view, than his was better than mine. But, I love the memorial to Clive.

However, the game was chippy all day. The scrum at the end was just bound to happen. There was a lot of sour grapes acts by both teams the whole time. Montero was in the referees ear the whole game and was probably one of the dirtiest players out there today as I saw it, so I was happy he got sent off. Palmer was just asking for it right there at the end. I was surprised more cards weren't handed out to be honest, but I would like to believe that the ref had good control over the game.

As for the experience, the stadium was loud and rocking the whole time. It was a great atmosphere. The fans around me were mostly polite to one another with only a few jabs exchanged verbally between fans as a joke. As I left I heard a lot of TA fans (gotta love 'em) calling out the Seattle fans and calling them nasty names that begin with the letter C and so on. I would definitely go back next year assuming I can afford the tickets...

But, hey! The Timbers won the important one!

Here are the highlights where you can see more of the Tifo with the tribute to Clive as well as the goals. Also, Kasey Keller (now doing ESPN commentary and not defending Seattle's goal) mentions UP!

Here's a story from the Guardian in the UK that captures much of the essence of Clive, the Timbers, the city, and the fans:

It's quite a way to elevate banter between rivals. Last weekend, the Seattle Sounders arrived at JELD-WEN Field to play their Cascadia rivals the Portland Timbers. The game itself finished in a 2-1 victory for the Timbers and a sending off for each team - fairly typical, robust, derby fare in other words. Atypically, the most memorable image of the day came before a ball had been kicked in anger, as the latest episode in an ongoing battle of creative oneupmanship took place in the stands.

As the pre-match rituals took place, Timbers fans hoisted a 20,000 square foot, 1500lb banner that had taken the work of 66 riggers and which honored the club's past with the phrase: "Legends are born when the previous are surpassed." The giant tifo display showed the flags of Portland and Cascadia, flanking both the Portland skyline and an image of Clive Charles, the former West Ham and Timbers player who after his playing career went on to transform the University of Portland soccer program into a national powerhouse - shaping the early careers of the likes of Kasey Keller and Steve Cherundolo in the process. When he died in 2003, his shirt number 3 was retired by the club - and Sunday's banner was a mark of respect from the fans for one of the most significant figures in Timbers folklore.

As Garett Dittfurth, a Timbers Army rep who has been involved in most of the recent big Timbers tifos, put it:
Clive is in the Ring of Honor here - not so much for what he did on the field, though he had a good NASL career, but for his connection to the people here and what he did for the infrastructure of the game, not just in Oregon but nationally, with the young players he developed. We're still looking for a player in the MLS era who can step up to have that sort of connection with the people here. This was our way of celebrating and inspiring.

The tifo was also, however, the latest installment in what for the neutral is turning into a very entertaining rivalry between Portland and Seattle fans, conducted via the medium of these large scale displays. Seattle may not have been mentioned explicitly in the latest banner, but make no mistake about it, it was no coincidence that they were the guests at this latest unveiling and the "Legends" message was no accident either, as it has been a charged word in the exchanges between the rival fans.

To read the rest of the story of the Sounders/Timbers rivalry so far (in the MLS era at least)...go here:http://www.guardian.co.uk/football/blog/2012/jun/28/portland-timbers-seattle-sounders-tifo-display?newsfeed=true

Great stuff... thanks for posting!

The 90th minute. No excuse for grown men and professionals acting like kids, no matter how important and heated the rivalry is. You can change kits if its so bad anyway.

I personally was glad that the Timbers didn't wear their Rose City Red kits because, like the Notre Dame green uniforms, they just don't perform well in them.

RipCityPilot wrote:The 90th minute. No excuse for grown men and professionals acting like kids, no matter how important and heated the rivalry is. You can change kits if its so bad anyway.

I personally was glad that the Timbers didn't wear their Rose City Red kits because, like the Notre Dame green uniforms, they just don't perform well in them.

I don't mind the red change kit. I don't like it when they wear it at home. Green is the color.