Geezaldinho wrote:Some Brit fans started counting up which team had more players who have played for either Man U or Chelsea.

It seems his reputation for impartiality doesn't carry over to the Premier.

EVERY referee in the Premiership favors Man Utd and Chelsea.

HEY, you have no idea how much debt and laundered oil money it takes to get that way... we EARNED it....

Nice follow for the score by müller, but Germany is very lucky to not be playing one down now.

Forlán's fifth of the cup. great struck off an nice steal and feed.

And now Jansen evens it up. Nightmare game by the Uruguay keeper. I wonder if he's one of the flu victims.

kheidera pounces on a cross and scrum in the box. Just too many corners given. 3-2 Germany.

As wide open as this game is, I don't think we are done.

Wow! Forlán hits the post at the final whistle.

PurplePrideTrumpet wrote:Actually, the England team is in the Final.

The team led by referee Howard Webb, that is. He's bound to be very familiar with both teams and he has avoided huge mistakes, so I can see how he got it.

So he waited till the final to have his bad game? Not impressed at all. Made the game tough to watch. Way to inconsistent on his calls.

Congrats to Spain on their first World Cup.

Howard Webb just showed us what is so very wrong with the " let 'em play" mentality. He lost control of the game when van Bommel hard fouled Iniesta and Iniesta retaliated. He couldn't do anything to salvage the game after that.

Ugly, really ugly. The only thing worse would have been if the Dutch came away with the win.

What about when he gave Heitinga his first yellow on a "foul" that replays showed he was looking in the other direction...or his second on a play when Iniesta tripped over the chalk line...or when he gave Spain a goal kick after a free kick cleary deflected off the wall...or...

I don't know about any "Let 'em play" mentality. That game seemed to be completely start and stop. He called everything (and then some) and Netherlands and some things on Spain.

Other than the constant flopping and crying, I think Spain were the better team today. I think they should have won the game. Both teams had their chances that SHOULD have been put in the back of the net. It really felt like Spain was going to score at some point, and they waited til the 23rd hour.

Well, he certainly let deJong play after this challenge 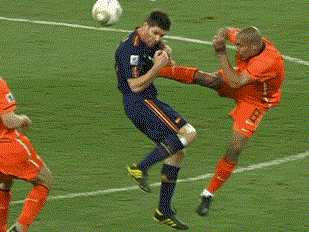 Not a straight red? really?

and who did the diving here? Van Bommel or iniesta?

Ohh....I just felt my aorta ripping off my heart...

From the other side...

It's so brutal even van Bommel had to look away.

Yes, DeJong should have been sent off...and to answer your question, both of them flopped. I like that Iniesta was writhing on the ground with a broken leg and quickly gets up to give Van Bommel a hip check (forearm...push?).

Like Alexi Lalas said, if the best team can't win playing beautiful soccer, the next best scenario is the better team winning ugly. And also from Lalas, If Robben had gone down on that breakaway Puyol would have been sent off. Every soccer player in the world thought he should have gone down.

So it's only a foul if you go down? Maybe that is why there is so much diving. Shouldn't the same action be punished the same, whether or not Robben tries to continue on the play or Iniesta falls down?

Also, what happens if that pass to Cassilas bounces into the net? Do the Dutch allow Spain to score a fair play goal?

I've seen that "flop" characterized on the web as a

I guarantee if you let me kick you in the ankle like that you"d go down, too. Amazing how you can fault iniesta for both going down and for getting up. That's diving?

At the end of the Germany match Jurgen Klinsmann said the Germans showed too much respect and if you wanted to beat them, you needed to be

That's exactly what they did, and the result backfired, whistle in the pocket not withstanding.

Trying to defend individual calls against the Dutch is just silly, considering what they got away with. Any other interpretation is through orange colored glasses.

The issue with this ugly thugfest was not Spanish diving. There were more Dutch fouls and cards that the Robo del Siglo and Battle of Santiago combined. Those two games held joint title to the ugliest games in World Cup history.

I sorta feel bad for the Dutch for not finally getting their first Cup, but if they had won with these tactics, I would have considered watching all 63 contests a complete waste of time. Even as it is, that they are whining after for their failure puts a bad taste in my mouth.

Just go home and try and come back in four years playing Soccer.

wonderful action by both teams.

I would cry too after some of those challenges by the Dutch.

After the first 15 minutes I was expecting them to finish with 10 men. I was just surprised it took so long, and they should have finished with 9 had Webb seen the karate kick. I don't really care that Heitinga's first card was marginal; he knew he was on a yellow when he committed the foul that led to his second booking.

I'm just glad Spain was able to put one away in extra time. It would have been a damn shame if they went out on penalties as they were the far more positive side today. They deserve the Cup.

wonderful action by both teams.

It's all good now.

I watched the game in the Square today, then went up to PGE and took in the last 70 minutes of the U-23s. Very attractive football there. Then I finished up with the Timbers-Atlas friendly for a long weekend of football.

PurplePrideTrumpet wrote: they should have finished with 9 had Webb seen the karate kick.

Webb saw the kung fu kick unless he sleeps with his eyes open. 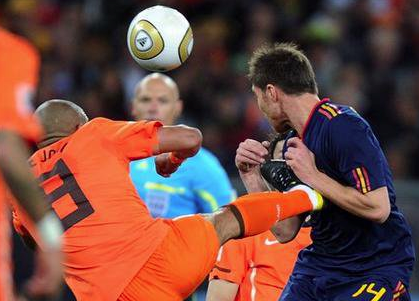 PurplePrideTrumpet wrote: they should have finished with 9 had Webb seen the karate kick.

Webb saw the kung fu kick unless he sleeps with his eyes open.

Umm...maybe he decided de Jong got the ball first

Glad you saw some good soccer, though. I also caught a few minutes of a WPS game.

Nothing really special except that I got to see three players from UP from different eras on the pitch together at the same time, Millie, Christine, and Marta.

Best play of the entire cup??

perhaps Nigel deJong watched a little too much of this