For the growth of soccer in this country, the future of professional UP MLS players, and many others the impending MLS lockout really seems gloomy. Although the players are united in their stand for better rights such as free agency (among many other things), I can't help wondering if they're asking for too much too soon at the wrong time (since the economy isn't the best). What do you think?

I am not up on most of the economics of everything, but it does seem like not the best time for a strike/lockout. I do know that there are not a lot of players making a lot of money. But is MLS stable enough/mature enough with a rich enough TV contract to withstand free agency (and the spike in salary that would follow)? I doubt that it is. The other thing is that with the World Cup around the corner, they really need to build on the interest generated by the World Cup, not kill it.

Basically the players want the European model which rewards them richly, but requires your owner to either have possible mafia ties, or take on huge swaths of debt in order to remain afloat. Financially the MLS's structure keeps it as the most stable and sustainable out of any league in the world, you allow full free agency you are going to seem the same problems that I mentioned earlier along with the dreaded a-word suffered by fans of Leeds (and potentially Portsmouth) and others as smaller owners try to spend and keep up with the larger ones... It really is a huge mess.

Actually, I'm not so sanguine about the MLS and how the league runs. It's anti competition as far as the players salaries is concerned and in term of the leagues ability to form world class competetive teams.

Owners now have a guarantee of salary, but they have a more important guarantee that no matter how badly they screw up, they will get whatever financial incentive (TV, Adverts, Media, etc) come with being called the top league. the incentive is to have an entertainment, not necessarily a top soccer team.

The rest of the world has relegation. If you screw up enough, you get demoted and somebody else who is doing well gets your spot in the Premier league.

Pretty good incentive to put a decent product on the field. What's the incentive now? Why are the best games the ones with contenders against lower level teams in the BPL every year?

If this were a European or South American Nation, the taunt in the Timber's section at the game in Seattle last weekend would have been 'RE-LE-GA-TION" "RE-LE-GA-TION"

Yeah... but relegation flat out isn't going to happen in the US... Contraction? yeah, thats already happened. I just don't see the concept of relegation EVER taking off here at the pro level (although ironically our youth leagues, or at least the ones I grew up in, do adopt just such a tactic...)

It will happen eventually or US professional soccer will die (again). eventually people will know good soccer if they are fans and know this league can't or won't provide it.

Player salaries and contracts are world wide. To think we can offer a second rate product forever in this country is doomed to failure.

The good players will go elsewhere at first chance, and US teams don't even have feeder systems, which is the main source of income for S. American teams.

Boca , River and Santos got rich sending players to Europe.

Haha those seeder teams that start the players at the age of 12-13, produce 10-15 players and then leave the hundreds of others with a minimal education and turn a ridiculous profit on their backs? Who do they think they are, the NCAA?

I think what may eventually happen here is contraction and some teams will join the Mexican league or somesuch. in would be good for both countries.

Or some teams will form a big part of the their schedules around Copa Libertadores -type competitions. Right now those kinds of games provide some team's best gate of the year.
But in order to do that, they have to be good enough to be invited. I think it's short sighted to think a US league can be isolated from the rest of the world.

See yeah, I think the closer the MLS can tie in with the Mexican sides the better... They are already really well established fan bases and the competition level is quite good as well. I could do without the supporters tossing bags of "guess that excrement" at opposing fans and players, but other than that a Super League of sorts makes a lot of sense in the long run. (Although the MLS owners might be leery of aligning with teams whose financial backing can be questionably sourced, but hey, they seemed to celebrate Chelsea coming through last year!)

I like the Champs League concept, and I know they are doing their best to promote that even if it's trophy is a bit on the new age end of the scale: 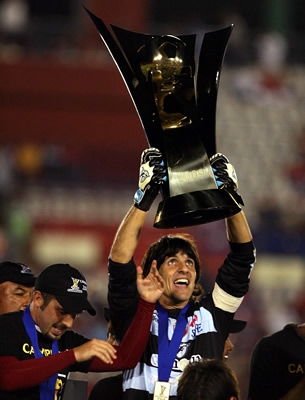 I think the other thing that is kind of confusing is you have the US Open Cup, a concept I really like, the Supporters Shield (which really should be the true measure of the champion), the CONCACAF Champs League (which for some reason is lost on the US market right now) and then the MLS Cup, which at the end of the season just seems kind of silly and on a global scale irrelevant (haha kind of like the Carling Cup...) The MLS Cup simply appeases to the Superbowl/World Series/BCS american mentality which, lets face it, really shouldn't be the market they are going after IMO...

Also admittedly us running games completely opposite of all the Euro teams makes for difficult scheduling anything meaningful beyond friendlies. I know going against the behemoths of the NFL and college football is, for all intensive purposes, financial suicide right now. But the MLS will always be second fiddle to the world game as long as we kind of flout our noses at the FIFA recommendations... As much as I hate admitting Sepp Blatter being some way, shape or form correct.

(Haha I apologize if that didn't make sense)

There's an article in the NY Times today on how the current structure and Donovan's success with Everton coupled with the player's strike vote is putting pressure on the current setup.

Now Everton wants to keep him, he wants to stay, and if a strike happens, he just might stay in England.

One of the few gate draws in te US game will be gone from the MLS,

English Fans Find an Unlikely Love for a Yank

even without a strike, he'd be crazy NOT to want to stay there.

There are plenty of ways to improve the product without resorting to relegation. I don't think relegation is a bad thing, but, I don't see the leser league as being as financially viable as the MLS with the same amount of sponsorship and support.

I actually think that the players are on the right track, and I'm hopeful that something will be resolved. Here are a few of Keller's comments about the collective bargaining agreement:

I read that too. Yes! Time to get tickets and enjoy. It's great that the league got the kinks out before PDX and Vancouver join the mix. The collective bargaining agreement will make things much better for the league... more guaranteed contracts and closer to being FIFA compliant. Hopefully, this will allow the league to get a few better European players to come...