Just doing my morning scan through Soccernet and came across an article about Luis, and the struggles he's had to see first time action since missing some preseason work to play for the US in the Gold Cup last summer:

DaTruRochin wrote:Just doing my morning scan through Soccernet and came across an article about Luis, and the struggles he's had to see first time action since missing some preseason work to play for the US in the Gold Cup last summer:

Yeah, Unfortunately Luis is on a team with the projected future #1 German NT Keeper who is younger than Luis. They have (including Luis) three highly rated keepers and the countries top keeper coach.

Talk is that if he wants regular time he'll need to transfer to another team. he is viewed as a keeper who can be a started on every other Bundasliga 2 team. So, either he leaves or waits for the #1. to go down with an injury..Which seems to happen fairly frequently with his team.

The remake of the New York Red Bulls goalkeeping corps could be in for another twist.

Karlsruher SC’s American goalkeeper Luis Robles, who has spent the last five seasons in the Bundesliga second division, will be traveling to New York this Friday in the hope of reaching a contractual agreement with the Red Bulls, a move that was rumored for the first time last week.

“We have been talking and I’ll be flying to New York on Friday,” Robles told MLSsoccer.com on Tuesday via phone from Germany. “Nothing’s for certain or guaranteed, but the opportunity is really enticing.”
Said Red Bulls sporting director and general manager Erik Solér in a club statement: “He’s arriving on Friday and we’re looking forward to seeing him in training camp." 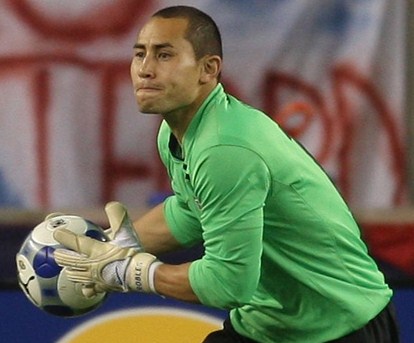 It’s not yet clear whether Robles will train with the club, pending the discussions that are set to take place on Friday.

The 27-year-old Robles is still under contract with 2.Bundesliga club Karlsruher SC, but the German side has granted him the opportunity to exit after it became clear over the most recent Christmas holidays that the Arizona native would be seeking other opportunities when his contract expired this summer.

Under his sixth head coach in just a year-and-a-half with the relegation candidates, Robles has experienced an unsettling stay which came after a positive three-year spell at FC Kaiserslautern.

“I’m in a situation where it’s not really ideal,” said Robles, who was on the US national team squads at the 2009 Gold Cup and 2009 Confederations Cup. “I’m on the outside looking in and that always happens when there are so many coaching changes in a season. … They did say that they’d let me go if I wanted to go somewhere and I appreciate they did give me that opportunity.”

Momentarily resigned to waiting for the summer to make another switch inside Germany, Robles wasn’t necessarily seeking a return to the USA. But he immediately took notice when the opportunity arose with the Red Bulls, who also have goalkeepers Ryan Meara and Jeremy Vuolo under contract.

The MLS league office confirmed that Robles could be acquired by an MLS club as a “discovery” signing. The fact that the ‘keeper is not a US youth international and is not currently in the US national team player pool means the allocation and lottery mechanisms would not apply in his case.

Robles was the 50th overall selection by D.C. United in the 2007 SuperDraft but departed to Germany the day after being drafted and signed with Kaiserslautern three days later. The talks with the Red Bulls represent Robles’ first formal contact with an MLS team.

“Deep down, we’re really excited about the opportunity, but we want to be careful about how we approach it,” Robles said. “I’ll come in, I’ll meet the team, I’ll meet the coaches and the staff and then we’re going to go from there. … But going into this organization would be an incredible way to come back to America.”

What is your status professionally?

A: "My contract is up this month and at the moment my agent is looking for more opportunities. But with my wife being pregnant, we're in this transition of, 'Do we want to stay in Europe or do we want to come back to the MLS?' We've reached out to the MLS and have kinda started talking to them, but we haven't decided yet."

A: "I think the MLS, even in the last five years, has come a long ways. … Just seeing how the MLS has grown in its stature as well as its awareness around the country, it continues to get more attractive."

What are your goals?

A: "Five years ago when I left for Germany, I had all these ambitions. And I wouldn't necessarily say that those have changed. I would just say that my perspective has changed. I used to think that if I took care of everything and I put in the work … that it would always work out. Sometimes that's not the case, and sometimes circumstances come up that you never could have forecasted."

The New York Red Bulls acquired goalkeeper Luis Robles via the MLS Allocation Process. He will be officially added to the Red Bulls’ roster and eligible for selection upon receipt of his International Transfer Certificate.

By taking Robles, New York moves to the bottom of the MLS Allocation Order.

“Luis is a goalkeeper who we have been interested in for the past year and we are excited that he has joined our squad,” said New York general manager Erik Soler. “We think that he has potential and we are eager to evaluate him in person on a daily basis at our club.”

Robles spent the past five seasons in the Germany and was most recently with Karlsruher SC, where he made 28 appearances from 2010-12. The 28-year-old started his stint in Germany with FC Kaiserslautern in 2007 and appeared in 36 games for the club.

He was drafted by D.C. United in the fourth round of the 2007 MLS SuperDraft with the 50th overall selection out of the University of Portland, where he attended from 2002-06. Despite being drafted by D.C., Robles did not sign with United.

On the international level, Robles has earned one cap for the U.S. men's team and made his debut in a 2-2 tie with Haiti in the 2009 CONCACAF Gold Cup. Robles also played the 2003 and 2004 seasons with USL Premier Development League side, Boulder Rapids Reserve.

Luis had his first start to day in a 4-1 win. His goal given up was no fault of his own, but apparently a solid start otherwise.

DaTruRochin wrote:Luis had his first start to day in a 4-1 win. His goal given up was no fault of his own, but apparently a solid start otherwise.

I got no problem with Kenny Cooper scoring as many as he can. Maybe now some of the haters will realize how dreadful our midfield has been these last two years. You can't score if nobody can get you the ball.

You mean making him chase the ball sideline to sideline and try and create his own offense every time isn't an effective use of his talents? /sarcasm

Luis was in goal for New York tonight and made some fine saves to hold the Timbers to a draw. Clearly he had some good coaching along the line. Heath Pearce was also in the XI.

If Portland hadn't made some basic defensive errors in the first half we'd be talking about a decisive Timbers win. I'll take the point.

Valeri's goal was really something special.

And I don't know what Porter said to them at halftime, but the Timbers came out possessed.

Luis Earned his paycheck, even giving up three.

A great 2nd half tonight... The Timbers appear much quicker this year... and used every inch of the new wider JW field. A solid point earned tonight, after some very shaky play to open the match.
_________________
Run 'Em Aground Pilots!

Only my third game ever amongst the Timbers Army tonight (and first game in quite awhile where we weren’t soaking wet)….and I’ve gotta say, that as good as the game may have been (I’m sure the DVR will confirm just how good it was), the singing/chanting/going crazy with the Army was the highlight for me....what a great group!

I guess there’s just no way to replicate that atmosphere at an American college basketball game….maybe removing all the seats would help, but it is just a wonderful experience to scream your lungs out and not have the lady in front of you turn and give a scolding look.

The Portland Timbers’ season has begun…..and the fun is back in sports!!

That UP kid, Luis Robles denies Robbie Keane's free kick, and saves the game for the Red Bulls.....#sick

I think Bigs made him stretch out half a million times...

Have you ever watched a UP keeper practice?