I know there is a lot of excitement about the girls team right now, and rightfully so. I will be cheering them on as loud as anyone else. lets not forget, however, that then mens team is currently ranked 43rd in rpi. if they are able to win both games this week, they stand a very good chance of playing in the 48 team tournament.
there is also another good reason to come out and watch the games this weekend if you get a chance...the team will be saying good-bye to four seniors on sunday afternoon, right after the girls beat ole miss or UW. i know the men's team has been down the past 5 or 6 years, but these seniors have given everything they had and we should all be very proud of them. lets stick around on sunday, at least to show them that we appreciate the work they put in.
GO PILOTS!

I'll be out there, but the Men's prospects aren't quite so rosy. the men's Tournament is only a 48 team Bracket, so it's a bit harder for them.

There are only 27 at large selections, and fewer to compete for if there are conference tournament upsets.

If I recall, last year you needed an RPI in the mid 30's

Without a system like UPSF's on the men's side, it's tough to tell how close things are. I suppose anything is possible.


The real reason to go out there is to watch good soccer, and there has been good soccer this year.

last home night game for the men...lets get out and support them. i know they have struggled as of late, but they have provided us with some very entertaining soccer this season and given us reason to hope that the men have turned it around. the season is not over! GO PILOTS

The two seniors who played tonight, Collen and Logan, were two of the better Pilots in the game. Especially Collen with the first goal.

Pilots slipped up a couple times and were down 2-1 at the half but I like how they fought back to put away the win tonight 4-2. 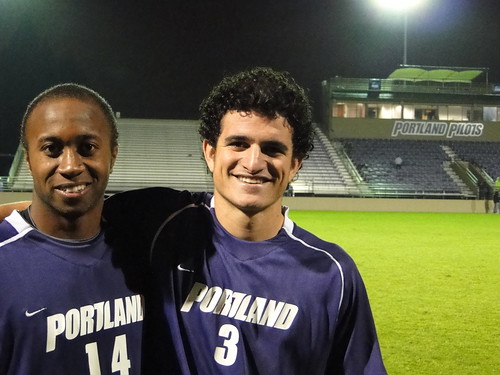 Ohhh_yeah! Thank you so much for the photo of Collen and Logan. We (the parents) appreciate all that you do. For that matter, we appreciate all that you all do for our men's team. We will greatly miss it all. So far, we have 5 parents going down to Thursday's game. Go Pilots! I so much want another shot at Virginia. We are a very different team now.

I just noticed the comment above, thank you Islander.

Logan is now a Puerto Rico Islander according to Talk Timbers.