Megan underwent meniscus surgery this last weekend. She will miss the Germany trip, but her recovery is only supposed to be a few weeks. Our best wishes for a speedy recovery, Megan.

A friend sent me a video of some funny penalty kick and when it was over, lo and behold the next video in line was of one of my favorite women's Pilots ever, Megan Rapinoe:
https://www.youtube.com/watch?v=dJ2_RkXU-lM&NR=1

Ellsbury, the former Madras High and Oregon State standout, won the Harry Glickman Award for male professional athlete of the year, while Rapinoe was the Glickman female award winner.

Ellsbury had a career year for the Red Sox, hitting .321 with 32 home runs and 105 RBIs, finishing second in the American League MVP voting. Former University of Portland star Rapinoe was a midfielder and key member of the U.S. women's professional soccer team, which made the finals of the 2011 FIFA Women's World Cup.

Congrats to Megan. The award was first presented in 2001 when Tiffeny Milbrett won it, then Christine Sinclair got the award in 2006.

Megan makes the third Pilot recipient out of the 12 times it has been awarded.

According to the Pilots Athletic Department:

2012 Olympic gold medalist and former Portland Pilots women’s soccer standout Megan Rapinoe will attend Sunday’s (October 28 at 1 p.m.) game against Loyola Marymount at Merlo Field, and the midfielder will be honored with a halftime ceremony. Rapinoe will also take part in a post-game autograph zone.

Had a nice chat with Megan after she signed about an hour's worth of autographs...she's now a Portland resident having just moved here. She promised to be "regular" at Merlo Field as much as her schedule will allow.

From the Oregonian today (edited):

The 5’6, bleached blonde might not have stood apart from any of the other 3,000 soccer fans wearing big rain jackets Sunday. She cheered when her team made goals, talked possessions with her sister.

But soccer star Megan Rapinoe had something that no other fan watching the University of Portland pitch Sunday afternoon did: A gold medal in her pocket.

Sunday was Rapinoe’s first return to her alma mater since she helped the U.S. women’s Olympic team defeat Japan in the soccer final.

“It just makes me so nostalgic,” she said, watching this year’s team move the ball through heavy rain. “I want to be playing. The field looks beautiful.”

Rapinoe lived in Chicago for two years after graduating in 2008, but she’s most spent most of the past four years traveling. After the World Cup and Olympics, her life slowed down a bit. She moved back to Portland with twin sister Rachael a month ago. They live in the Pearl District.

“I always wanted to come back here,” she said.

The school honored Rapinoe at half-time. Its makeshift band did a combination percussion a capella singing of “We Love You Megan,” to the tune of Frankie Valli’s “Can’t Take My Eyes Off You.”

And she signed one giant autograph over the back of freshman Sky Nelson’s gold jacket. Nelson wears the jackets during games. When the team scores, Nelson carries a UP flag and runs around the stadium in nothing but the jacket and a kilt.

Unlike Rapinoe’s medal, though, he said, “This isn’t actually real gold.” 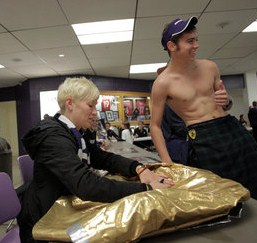 Having Megan back in town has given her and UP some recent ink; writer Steve Duin, who rarely writes about sports personalities, has this to say in today’s Oregonian:

She wanted the ball. Megan Rapinoe usually does. “I want to enjoy the ball,” is the way she puts it, and she has always trusted that her teammates and the fans of U.S. soccer will delight in the glorious things she does with it.

When Carli Lloyd finally passed her the ball on that July afternoon in Dresden, Rapinoe had all of two seconds to enjoy it.

“There wasn’t a lot of thought put into it,” she says. “I just kicked it as hard as I could.

“I didn’t see Abby, but I knew she was going to be there. She’s always in the box.”

When it comes to the unforgettable moments of sports, you can have your Pablo Sandovals, your Taoufik Makhloufis and your Rose Bowl victories.

I’ll take Rapinoe’s cross to Abby Wambach in the 2011 World Cup. The U.S. was down a goal, down a woman and down to its last desperate minute in the quarterfinal match against Brazil.

Seventeen months later, I still shiver watching Rapinoe launch the pass that Wambach headed in at the far post.

“You play for those euphoric moments,” she says.

When Rapinoe was honored by her alma mater Sunday at the University of Portland’s Merlo Field, she didn’t need to travel too far to be feted by her fans and the rain.

She’s now living in the Pearl District with the gold medal she won at the London Olympics, the scene of another performance that added to the “Pinoe” legend.

In the United States 4-3 victory over Canada in August, Rapinoe and Christine Sinclair — her former Pilot teammate — scored the game’s first five goals.

Rapinoe is similarly wired. She concedes she didn’t develop a consistent training regimen until she reached UP in 2005 and teamed with Sinclair to win the Pilots’ second national championship.

She played basketball, not soccer, for her Redding, Calif., high school, driving 160 miles once or twice a week to play club soccer in Sacramento. Her practice schedule was chaotic.

“Maybe that’s the reason I’m a gamer,” Rapinoe says, “I just had the game.”

If the late Clive Charles — who convinced Rapinoe and her sister, Rachel, to choose UP over Santa Clara — could deal with her stubborn, instinctive commitment to “enjoy the ball,” other coaches have been less impressed.

“I play a certain style. I’m not willing to compromise that part of me,” Rapinoe says. “I took the approach that this is the way I want to play and if that lands me on the bench, that’s your (the coach’s) choice.

“But that still lands me on the bench. And that’s not where I want to be.”

Rapinoe came off that bench to send that unforgettable World Cup cross to Wambach.

She came off the bench early in the 2012 Summer Games to score a memorable goal against Colombia — she celebrated by grabbing a field-level microphone and breaking into Bruce Springsteen’s “Born in the U.S.A.” — and counter Sinclair’s first two goals in the epic match with Canada.

I suspect Rapinoe will be starting when the U.S. national team plays Ireland on Nov. 28 at Jeld-Wen Field. She’s a little miffed that she’ll miss Springsteen’s performance that night at the Rose Garden, but other than that, Rapinoe will enjoy the moment.

She’s happy. Happy with her long-term girlfriend, Sarah Walsh. Happy to be one of the 10 nominees for FIFA Women’s World Player of the Year. Happy to call the Pearl District home.

And happy that she’s invariably in the middle of the game’s euphoric moments.

“Some people play best when they’re frustrated and mad,” Rapinoe says. “I play my best when I’m happy. I really, truly do.”