I would pay to see this.

She said once upon a time she could beat Pooh in basketball and that Pooh would like to set up a meeting where the two would play basketball against each other then run 100 meters.

Pooh alerted us to watch Carmelita today in the Prefontaine Classic running the 200m; she was beaten badly by Allyson Felix, and finished third. 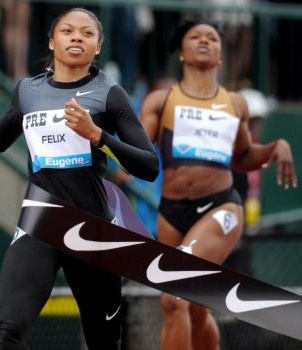 With the Olympic Games quickly approaching, here’s a timely, but compelling story and 5 minute video bringing us up-to-date on Pooh’s big sister, Carmelita.

Camelita is going to London

Carmelita finished first in the 100M at Hayward and is going to London!
She and Tianna Madison finished first and second. The third place finish between Janeba Tarmoh and Allyson Felix was a dead heat.

They haven't figured out how to decide who goes to London.

Felix beat Carmelita in the 200 at the Pre Classic. Tarmoh is a training partner of Felix and a recent graduate of Texas A&M University.

USATF spokesperson Jill Geer said there is no procedure in place for breaking such a tie.

Uh, how about another race?

That is apparently low on the list of options. My guess is they will wait and see who qualifies in the 200.

In a sport that has been around for thousands of years, and that in this modern era has the potential for fame and fortune for the winner, the US track officials do not have predetermined method for a tie-break?? Amazing!

According to reports I’ve read, both runners in this mess have contracts with Nike that almost surely include significant bonuses for making the Olympic team.

We have shoot-outs in soccer, and swim-offs in swimming, so I guess we could have a two person run-off in the 100-meter. But as both runners will attempt to qualify in the 200-meter this coming week, it would be too much of a penalty to ask them to have a shoot-out before then.

Grrr, very frustrating to fans and athletes, and unfair too! 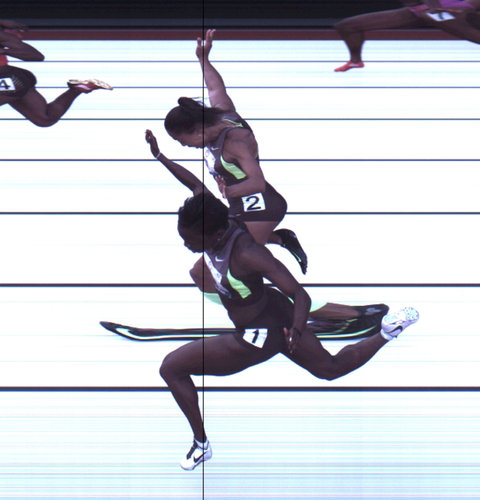 Yeah the sport is thousands of years old, but fame and fortune are just as old, what is new is 1,000 frame per second cameras, which apparently isn't quite fast enough.

An appeal to age and tradition doesn't help. The ancient Aztecs, Greeks, and Persians Cast lots and killed the loser.

Kinda hoping for a better method.

I vote for the magic 8 ball.

Kinda hoping for a better method.

But neither are losers in this case. That is until a decision is made by the gray haired guys in coats and ties; who are we to sacrifice?

In our trips to the Yucatan over the years we’ve often been told “guide myths” in which the guides tell stories to entertain or impress the touristas. One of the myths we always love hear is how the WINNER at the various Mayan ball courts are the ones sacrificed.

So I guess the US officials could tell the two runners the winner will be sacrificed or killed, and let the runners sort out the order of finish.

Does USATF know they don't make quarters with eagles anymore?

the first thing I thought of 0n reading the tiebreakers was:

"How did Kirk solve the Kobayashi Maru scenario again?

Does USATF know they don't make quarters with eagles anymore?

I don't care if it was written by USATF lawyers; that's great, now let's get back to basketball in the basketball forum!

Do you think Basketball alumn Pooh Jeter will play that game and have that race with Carmelita?

I'm betting he wins the basketball portion but loses the race portion.