No no no... no way do you include Sergio.

That contract is worth a lot, and Outlaw has more scoring potential and fits New York's system way better than Lee.

I see it as straight up Outlaw for Lee and Raef's contract for Robinson.

If Blake continues to struggle, give the reins to Sergio (who has been playing well the past week... even more minutes than Blake), and let Robinson battle it out with Bayless for scoring pop off the bench.

ummmm...plug that trade into ESPN.com's trade machine. Not going to work. But if you want Lee, you could make this trade.

I don't think you want Lee that bad.

Well the Knicks did pull the trigger on a trade today... just not this one.

Has anyone else noticed that Directv carries like 5 of the CSN channels, just not the Northwest one? Good thing I get two CSN channels for California!

Well I haven't given this thread any love for some time so why not...

David Lee for Channing Frye and a pick?? While I hate giving up draft picks it makes sense to me, Lee gives you versatility, he can play all 3 front court positions and gives you more of the classic post player that we lack right now. I love Channing as a person and you gotta love his PDX affections, but he really kind of duplicates what we have in LaMarcus... And I could see him fitting in VERY well with the D'Antoni Knicks. Not sure if y'all caught the WW article on Frye, but here it is, definitely give it a read: http://wweek.com/editorial/3507/12013/

Speaking of Blazer articles, this ESPN the Mag isn't a bad one either about LaMarcus: http://sports.espn.go.com/espnmag/story?section=magazine&id=3800651


So as for the team... The way they have been playing lately, SO up and down it's been ridiculous. I LOVE the play to beat Boston without Brandon, but it's obvious the team needs him to consistently win. I welcome the Lee trade because it seems to address a lot of our needs, especially with Joel playing hurt, but at the same time the guard play also seems to need to be addressed. I feel like as good as Rudy has been, he's been pigeonholed into the distance shooting role, which has stymied the development of the rest of his game.

Steve Blake is good, and then awful when he tries to do so much. The Boston game was kind of an anomaly, but when he has to be a creating PG it just doesn't seem to end well, he forces shots and doesn't puts players in poor situations to be successful. You might even say the lack of good PG play has hurt Oden's development on the offensive end. With good distribution Greg would get a lot better opportunities and gain the confidence he needs to really be effective in the long drive.

Martell needs to come back... STAT... We need his defense more than anything, his quickness and sheer speed are excellent shutting down (or at the least, containing) the Kobe Bryants and whatnot of the league. Outlaw's length is supposedly makes him a good defender, but his sheer lack of intensity completely erase that intent to be a "lock down" defender... Between Roy and Martell we have 2 excellent defenders capable of guarding elite SFs all the way through PGs... We need both to be successful, especially against good teams like the Lakers, Spurs and Celtics that can throw in so many different sets and lineups.

Since the success of the teams is pretty well divided in the west, there are 9 teams in the race for 8 spots... I hope the blazers are able to pull it out, but their inconsistencies really have me seeing the Blazers being that 9th team... Especially when competing with much more experienced teams like the Suns and Mavericks for those last few playoff spots. Haha I'm really not trying to be a negative Nancy, but it's just the vibe I've been getting lately...

I really don't see any trades happening until the off-season, if at all. I really want to see the whole team play together for an extended stretch before I'd be ready to talk about trades. We haven't seen Martell in the mix yet, so it's hard to see how guys will play together. Right now, the Blazers have guys in many roles that they are not normally going to be in. Adding even one player changes the rotation and so therefore changes the dynamic of the team. As far as the up and down play, I'm not concerned. This team has consistantly improved as the season progresses and I have no doubt they will make the playoffs. This team IS ALREADY competing with the elite and IS ALREADY garning respect and attention from the rest of the league. Make no mistake: THIS TEAM, IF THEY STAY TOGETHER, WILL BE A FORCE TO BE RECKONED WITH FOR YEARS TO COME.

Changing the team dynamic with trades is an absolute mistake. In addition to that, this team already has enormous potential. The rest of the league knows that. I just don't see the other GMs agreeing to any trade that would increase that potential and make the Blazers even stronger. I would think that they would be looking to hurt the Blazers potential if anything. . .

This season is still young. Let's have some patience and not worry about championship aspirations. Let's just see what THIS team can do THIS year.

Yeah, I see where you're coming from, SciFi. Definitely don't want to mess with a good thing. And we do have a great nucleus of talent. BUT... Pritchard wouldn't be doing his job if he wasn't trying to make the team better every single day. And David Lee would make this team better, no doubt about it.

I have long coveted David Lee and I think he's exactly what the Blazers need. He brings toughness, blue-collar work ethic, etc etc... he bring to the Blazers what Paul Millsap brings to the Jazz. A great contributer off the bench who, if forgotten about, can absolutly dominate. And I think the knock on this team has long been that it's soft, and I think we all know that Channing Frye and LaMarcus Aldridge, while talented, aren't really bangers.

And we also have a huge trading chip in Lefrentz' contract... it would be silly to not explore the different options out there. And now that it looks like Miles will get at least 10 games with the Grizzlies (first one was last night), we won't have as much cap space as we originally were hoping. So trading makes even more sense now, since the ability to sign someone has taken a hit.

Flat out, this team needs toughness to compete in the playoffs, if we got matched up with, say, San Antonio, it would be a pretty brutal 7 game series. I think making the playoffs is one thing, but to actually be competitive when you get there is another. Lee would address a big problem and be an asset in playoff style basketball...

Aside from that, (and long time Blazer fans will prob hate me for this) how long before we dump the dead coaching weight that is Maurice Lucas? I understand the need to have a Blazers guy with a Sonics coach originally, but flat out, the bigs are not improving the way i thing they could be with proper coaching... I've heard multiple times from sources close to the theam that Lucas gets little respect from the players, OR the other coaches. I think we need to bring someone in who the players respond to, especially with all the budding talent we have with our front line.

For all of you Blazer fans out there. I saw Cliff Robinson at the UConn-Pitt game tonight.

"Can I get a headband, one for my peeps? One for the fans in the really cheap seats?"

Remember his playoff headband? The one with the cutouts that he was going to fill in for every win until they won the Championship? Genius.

For your reading pleasure I bestow upon you Rudy Fernandez's blog:
http://blogderudyfernandez.blogspot.com/

Rudy is pretty damn funny, and of course the translator he uses adds a fair amount on the unintentional humor scale...

Black, white, or red, put it on your head. Gotta get a head band!

I like Rudy's rules of Basketball, though I'm not with him on #12

Yeah, that was the ONE sore spot I had with the blog... Although in another post essentially calls Adam Morrison one of the sloppiest dresses in the NBA, so he makes up for it...

Brandon got his contract, and well deserved.

He'll be making almost as much money as Zack Randolph got when he sat down with Whittsit.

Sigh. Oh...Blazers fans. Can't you see that Stern won't let small market teams win? Haha...just kidding. Most of us up in Seattle are mildly jealous that Roy is down there. I think you're over-hyping this team though. It's still probably the blind leading the blind until you add a few more veterans, but, who knows maybe the adversity of last year will help. Peace and good luck...

Um... I LOVE these new jerseys the Blazers just unveiled for the 40th anniversary of the team. They are, in a word, fresh:

I love those jersey's

. Especially the Rip City !!! I may have to get one on my trip to PDX this winter for the Pilot games.

The Blazers are also updating to the new style jersey that actually breathes, unlike the old one which rivaled that of a soaked beach towel at the end of a game... And no it won't change the design at all, it will just be made out of different materials and might fit a little trimmer (same style the Magic and Hornets wore last year and also the one they used for the all star game)

. Especially the Rip City !!! I may have to get one on my trip to PDX this winter for the Pilot games.

yeah, I gotta agree. especially if there is a version with sleeves.

Basketball jerseys don't exactly look good on me, though...

I have already ordered an XXXXL

Basketball jerseys don't exactly look good on me, though...

Do basketball jerseys really look good on anyone that isn't playing?

Do basketball jerseys really look good on anyone that isn't playing? 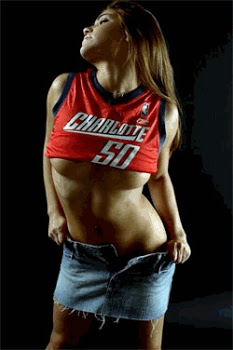 I stand corrected, but it would have been even better if it was an Adam Morrison jersey...

DaTruRochin wrote:I stand corrected, but it would have been even better if it was an Adam Morrison jersey...

I can usually find things pretty quickly on the net, but I'm no wizard....

Similar topics
» The new red and black
» Soooo....Weis?
» I See A Chiles Center and I want to Paint it Black...