Well, it always stinks to lose to the Zags, but the young Pilots put on a decent game tonight, even without Nik. It was good to see the team play well without him... this game could have been even more interesting had he played. Hopefully he will be back for the weekend games.

If they play like that against SC, they'll make a game of it. That's the type of game they were playing earlier and got away from it.

I haven
t seen the box yet, But Robin looked to me like he had a better game than Heytvelt. and it looked like Taishi was back a little. Luke and Kramer played well even though he didn't score much.

Walter had what I think was his best game.

Let's hope we get Nik back.

Well played game, Pilots! Your guys really felt they could win and took it to the Zags until they pretty much ran out of gas. You guys are going to be SOLID in the near future.

The thing about that game... an outsider who looked at the final score would probably just assume that the Zags dominated all game. But really, UP hung in there a LOT longer than I thought they could... heck, we were even up by 2 at half time and were up by 8 at one point until Pargo realized that he could just drive and lay it in every time.

But for me, the most impressive thing was how we stuck around deep into the second half. Honestly, I assumed that Gonzaga would come out guns blazing out of the gates and take a comfortable lead within a few minutes. But instead, UP went blow-for-blow for about ten minutes before the Zags finally started hitting shots and we stopped hitting them. Once they got up by 10 or so I knew it was over, and the final score could have been closer if we wouldn't have fouled so much at the end (seriously... why foul down by 15 with 50 seconds to go? I don't get that.)

Anyway, we sorely missed Nik in the second half when we got into the scoring doldrums... without him, we just don't have a guy to turn to when nothing else is working (like Gonzaga did with Pargo at the end of the first half). I also thought the Zags did a terrific job defensively against Stohl... I mean, how can he get his shot off with Micah Downs and Matt Bouldin draped all over him? And Luke wasn't able to get anything going on offense, though Robin had some nice moves to get a few buckets. Jasonn wasn't quite ready for that stage. I loved Kramer and Ethan's hustle... I thought Kramer had a really nice game, actually - one of his best yet. And against tough competition too... I think it's easy to overlook Kramer's contributions this season because he doesn't score a ton, but man... we're going to have a solid starting center who is a good physical defender, good rebounder, good passer, and can score when he has open looks for three more seasons. He's already better than Kevin Field was and I would say Ben Sullivan too, though Sullivan had more shooting range. But the best part is that Kramer has a bit of a nasty streak and will get after it, something this team sorely needs. I'm excited to watch him develop.

And Taishi... after a very rough start, he settled down and played a nice game, including hitting some shots!!! It's so great to see his scoring ability return... we really can be a different team with him as a scorer.

So yeah... I'm disappointed it got away from us at the end, but I was THRILLED that I had something to cheer about deep into the second half. And it felt so so so so SO good to be able to walk around with my head held high during half time and to see all the Zag fans looking worried. Just beautiful.

Here is the Oregonian recap: http://www.oregonlive.com/pilotsbasketball/oregonian/index.ssf?/base/sports/120401071398760.xml&coll=7

Does anyone know anything about Knee Bruises/Contusions like what Nik has? What is the recovery time frame? I assume that he will be back for Saturday's game, being that last night was a "game time decision" or so they say. We really could use him at or near 100% to pull off a W against the Broncs...
_________________
Run 'Em Aground Pilots!

If I had to guess, I'd say he could play as soon as the swelling went down, which will probably take a few days.

It will be painful for a while after that, but mobility will probably be ok.

I didn't really notice - was he limping last night?

I just read the recap on the UP website and I saw this interesting stat:

At the three minute mark, a pair of free throws by Robin Smeulders gave Portland a 27-19 lead, the largest Gonzaga deficit in WCC play this year.

One, it's pretty dang impressive that until last night Gonzaga hadn't been down by more than 8. But two... hey, that was pretty deep into the game. The coaches deserve a TON of credit for their game plan. Yes, we wore down by the end, but still... is it fair to say that Reveno outcoached Few last night? It might be... an article from Spokane quoted Few saying that they had prepared for this game for an entire week.

personally i think that these are the kind of games we will be able to pull out next year with a little bit more experience, strengthening and conditioning over the summer

one thing that its gonna help with for sure is confidence going into the last two games and the tourney... anything can happen in March

At the three minute mark, a pair of free throws by Robin Smeulders gave Portland a 27-19 lead, the largest Gonzaga deficit in WCC play this year.

At Spokane we never had a chance to be anywhere near Organza's competitiveness. That's how much improvement there's been this year. That's pretty much what next year will be with even more improvement, we could go far, if not to end this season, but next season. I'm getting excited for the next few games and next year.

I did appreciate that the game was close for about 30 minutes. But I have to wonder how seriously the GU players took UP after the earlier beating. As for next year, I noticed that Pendergraft and Kuso were the only seniors, so they'll be no drop-off in Spokane (unless Few winds up in Eugene).

Any idea why Sacre started and only played 4 minutes?

Not sure why they start Sacre and only play him limited minutes. Kinda strange. But he's still young and has a way to go... kind of like our Canadian big man. Except maybe a bit better.

As for them taking the game seriously....... I've never really bought that as an argument. I'm sure it's true that they weren't as amped up for the game as they will be on Saturday against SMC and maybe they weren't scrapping as hard as they would against UCLA or whatever, but still I think you can attribute it a lot more to UP disrupting them as opposed to them just sleep walking through it. Once we ran out of gas and they started hitting shots, it was all over... it wasn't that they all the sudden said to themselves, "I guess we should play now."

And they do appear to be set next year, assuming that no one leaves early to go pro. They might be a bit weak on the inside (Heytvelt, Sacre, and Foster are their only returning big guys), but they will be loaded everywhere else.

However, it's also possible that Pargo, Daye, and Heytvelt could all be gone. Pargo is a borderline NBA prospect, Daye is a big-time prospect who needs more seasoning, and Heytvelt, while not an NBA prospect right now, hasn't really had a great college career and may decide to take some $$$ and go to Europe. They guy has never been able to stay healthy, and it would make some sense for him to try and go make some big bucks while he can before his body finally breaks down. Would be a shame if he came back to GU next year only to break his foot again and be done forever.

Daye is the big question mark in my mind. He's a tantalizing prospect, but he also clearly needs to bulk up and work on his game. But upside has been king in the NBA for years, and Daye has a TON of upside. He would be stupid to not at least declare for the draft (not hire an agent) and see what happens. I think Pargo will do the same thing. He'll declare but not hire and agent and see where it goes.

And, of course, if they go on a big run in the NCAA tournament (which I think they could do), that will change everything... if Pargo or Daye goes off for 25 points in a few March games, you can kiss them goodbye.

So it will be an interesting off-season for them for sure.

As for Few, I don't think he'll leave after this year (as you said, they could be in store for a tremendous season next year if everyone comes back), but maybe after next season... the Ducks are losing a ton of talent and will likely have a bad year next year, the new arena will be almost ready, and Gonzaga will experience a huge exodus of talent. And their recruiting class for this year isn't great, so it's not like he's totally reloading.

To me, all of that adds up to Kent getting canned, Few coming off one of his best seasons, and the nicest arena in the country opening up soon...... it might happen. If Few is going to leave his throne in Spokane it will have to be for a good reason, and what better reason is there than to go back to your hometown and alma mater and go work for an AD who is a good friend?

Better late than never! I'm back with photos. 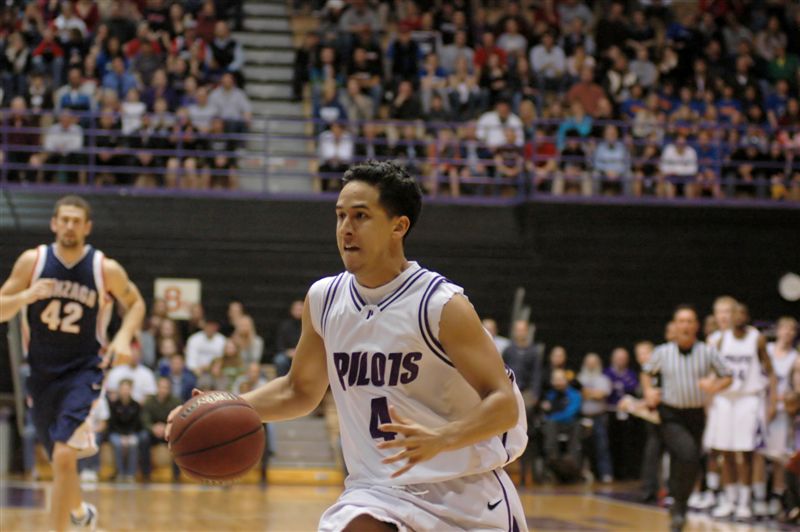 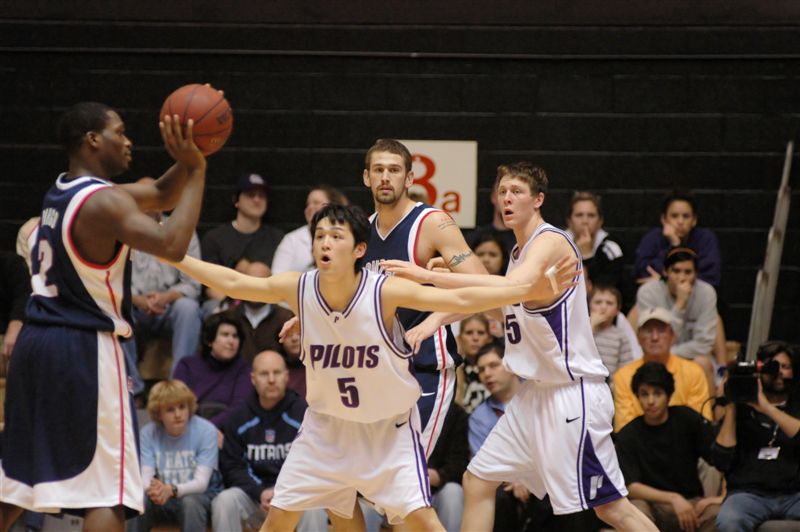 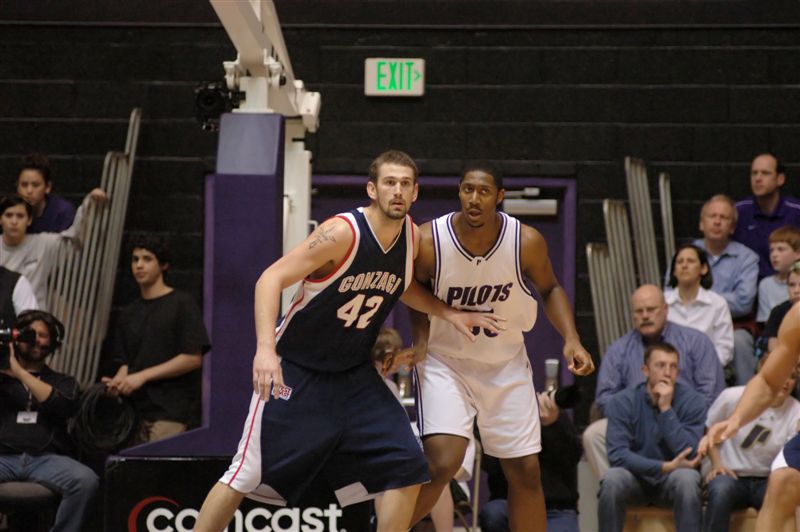 I believe the exact quotation is: "How about you pass - how about you not call that next time?!" He was yelling at the refs a LOT. Stay classy, Mark Few. 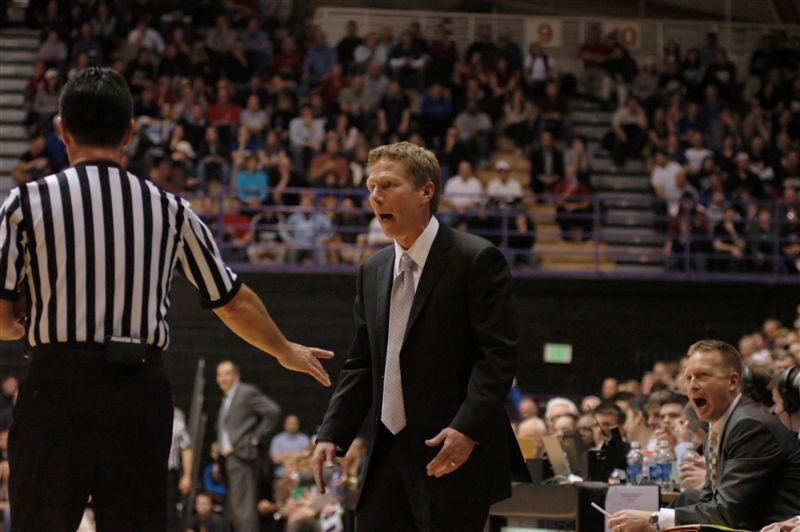 Pendergraft going right where he belongs. 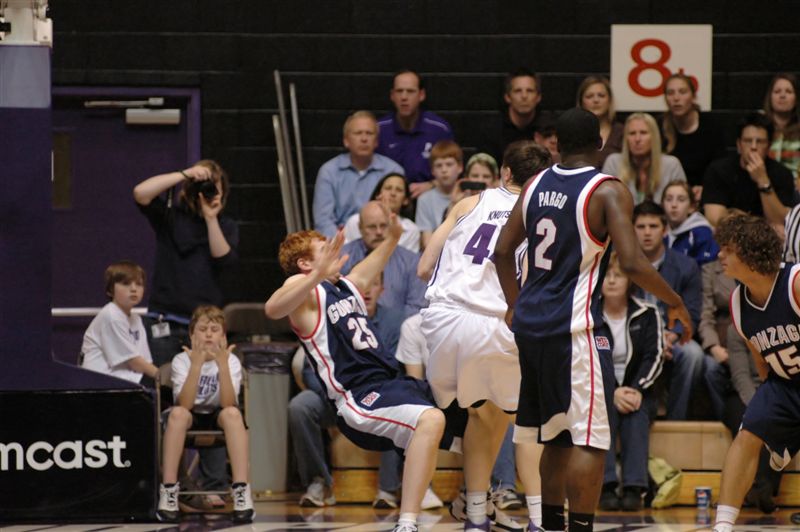 Band nerd question to all of you fans...we've been asked - by Pilot fans, Gonzaga fans, and other fans why we're not playing time outs. We'd like to know ourselves, but do you guys notice?