This can't be right

This can't be right

I was checking Jim Tursi's record on google (He just stepped down as coach at Willamette), and came across this:

ONE women's soccer player in the Hall of Fame? And it's Justi? Nothing against her. No doubt she deserves it, but there are LOTS of players who came through the program who are just as deserving.

you have to be out of UP for 5 years and professionally formally retired. -- anyone care to start a list?

Who votes on this stuff?

I agree, geez. It's absolutely nuts! For the last few years I have noticed the Hall of Fame boards as you enter Merlo Field.

I don't know the names of all the earlier great players. My memory bank starts with Tiffeny and Mac and Justi. Then Michelle French, and there are others from the 90's I can't recall. I really got involved as a fan in the new millenium, so Christine is at the top of that list. And obviously there are going to be a lot more potential HOF's in the future with the great classes we have had in recent years. (And continue to have!) The 2002 national champions should have representation, (other than Christine). However, many of these players are probably still playing professionally, so the focus probably is still on 80's and 90's Pilots.

I believe the committee votes every two years. Obviously, with Mac retired she will most likely be in on the next vote. Tiffeny has continued to play with the Vancouver Whitecaps, with teammates Sinc and Sophie Schmidt. Don't know when she will retire. The HOF committee should be adding a few players from the 80's and 90's fairly soon, I would think.

Shannon in the Hall

I just ran across this today: Time to Deck the Hall

Shannon is on the ballot for the ussoccer Hall of Fame this year.

She has pretty good credentials for admittance, too. 176 CAPs , 60 goals (7th all time) , Key player in 2 winning World Cups, founding member of the WUSA.

She'll get in... I sure hope UP doesn't put itself in the position of having a player excluded from the Pilot Hall of Fame who is in the National HOF.

Since the UP HOF only inducts honoress on odd numbered reunion years, there's a chance she'd be elected to the US Soccer HOF this year, waiting on UP until next year. I sure hope they induct a few of the women's players and more men's players in soon, Cindy Griffith and Linus Rhode being the first few that come to mind, besides Mac of course.

Shannon's in the hall

The San Diego Hall of fame, that is... right along side Ted Williams, Bill Walton, Marcus Allen, and other San Diego greats.
Being inducted along with her is big man coach Pete Newell and Olympic runner Steve Scott, among others.
(Scott set a record in the mile that stood for 25 years) 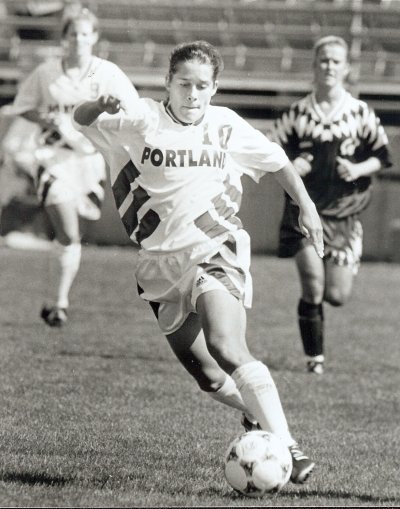 Shannon MacMillan was the 1995 National College Player
of the Year at the University of Portland before beginning
her U.S. natonal team career.

Shannon didn't get in the National Hall

UP was saved one embarrassment, anyway. The National Hall of Fame decided that Joy Faucet and Shannon MacMillan didn't have careers that were good enough to get them in the hall this year, but that Anson Dorrance is such a swell that he's in.

And I thought the old farts who sit on our election board were stupid.....

Well, the saving grace is that UP can still do the right thing first.