In 2019 there were only 2 preseason games played at Merlo, and I am told to expect only 2 or 3 home games this preseason.

One of the games will likely be a double-header with the men on Friday August 27, during the first week of classes.

Because the Pilots traveled to Cal in 2019, and last season's return game was canceled due to COVID, I suspect the August 27 home game will be against the Bears.

On the positive side, because the Pilots played only 3 WCC games at home this past spring, we should be able to expect 5 of the 9 WCC games at Merlo this coming season.

I have been told the tentative schedule has the Pilots playing 3 home games in the preseason:

August 27 vs. Cal at 4pm in double-header with the men playing at 7pm.

ALL SUBJECT TO CHANGE

DD wrote: On the positive side, because the Pilots played only 3 WCC games at home this past spring, we should be able to expect 5 of the 9 WCC games at Merlo this coming season.

Shouldn’t it be 6 of nine games?

By golly, someone does read some of the things that get posted here.

Yeah, 6 games makes sense to me...for some reason I had it in my head we played only 8 WCC games this past spring, but we played 9.

Got a peek at the WCC schedule that is being called TENTATIVE, but it is probably good:

Yes, it does seem like it should be 6 home games, but the schedule I saw had UP at LMU for the second season in a row.

Goalkeeper Gina Muzi transferred to St John’s University, presumably a victim of the extra year causing a bit of a keeper jam with players getting an extra year and another keeper coming in.

Hope she gets some playing time at her new home.

Today's Friday the 13th exhibition game against Bellevue College has been cancelled due to the poor air quality in Washington after week of extreme heat and smoke from the fires. 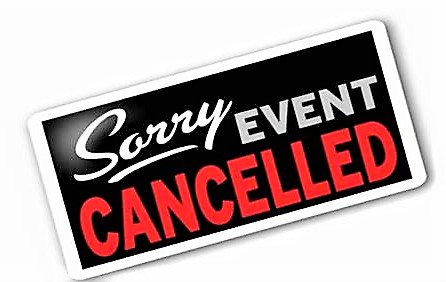 Watching the Utah game. This is possibly whe worst attempt at a video broadcast in history. I can do better with the camera on my iPhone. 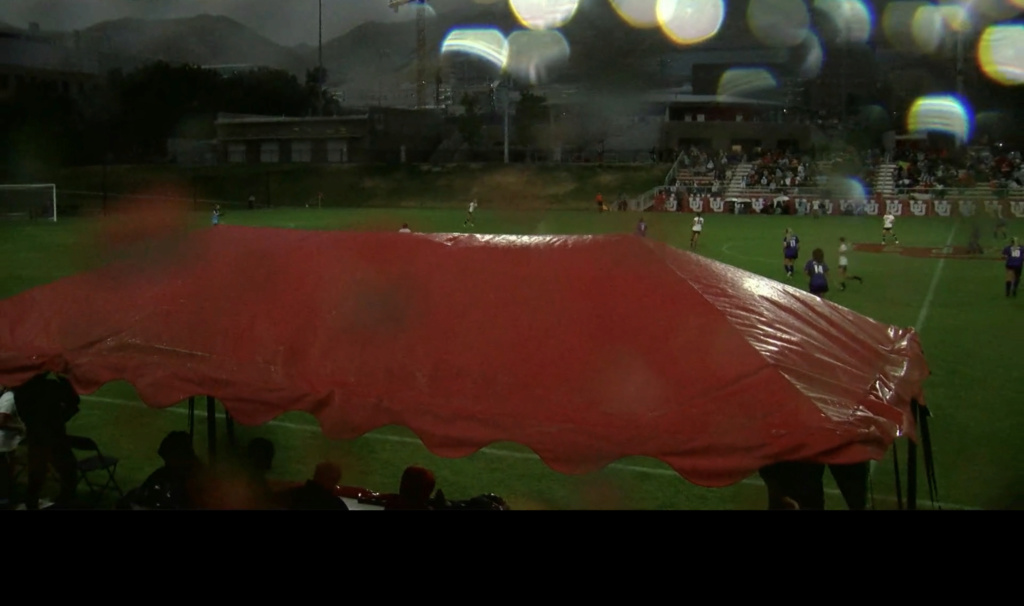 And in the few open spaces not obscured by canopies the camera work was atrocious.

The preseason home openers for both the women's and men's soccer teams today also brings the opening of the Pilot Club for the first time in 18 months...but at Merlo there will be some significant changes from the past until the pandemic subsides.

The rules and procedure will likely evolve, but this is what I am hearing:

2. When food greater than snacks is served at the Pilot Club it will likely be prepackaged.

3. Food and drink service will generally start 1 hour before kickoff (1 hour before the second game if it is a doubleheader…today it should start at 6pm) and end at kickoff, but snacks and beverage will likely be available beyond kickoff time.

4. There will be table seating to eat our food, but the capacity limit in the Pilot Club area is now capped at 50, so some may be asked to eat and move on if crowding becomes an issue.  (From my experience, there are rarely 50 people under the tent on a rainy soccer night, so it might continue to be a good refuge for those of us who generally avoid sitting in the rain.)

5. There will be no video feed to the monitor in the Pilot Club tent…and for those of us who are accustomed to running to the monitor for the replay of a goal we just saw live, that is a great disappointment.

Remember this is all unofficial…but I believe it to be true!

If we all work together to stop this pandemic, we can go back here in November: 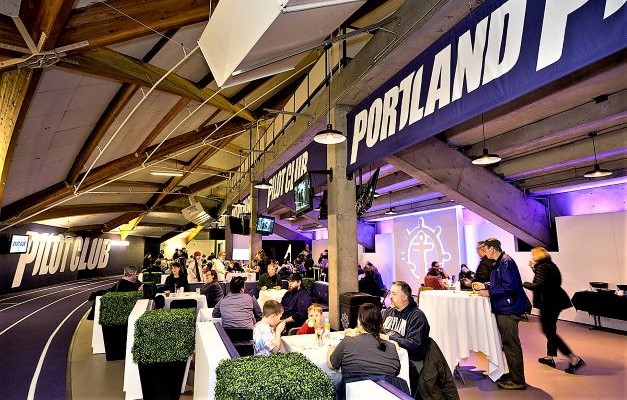 The virus will be with us forever. 10% of people at the game thinkwearing a mask on your chin protects people.

After 18 months I thought the Pilot Club got off to a pretty good start even though the first servings of food disappeared pretty fast with hot dogs coming to the rescue.

1. The first change I have heard is the return of the TV monitor to the Pilot Club area so we can hang out in the tent and watch replays, or even the entire game as long as we keep it to no more than 50 people in the enclosure.

2. In the future, even when the Pilot Club is closed, it will be “open.”  The Pilot Club space will be staffed by at least one person and reserved for card carrying Pilot Club members as a place to eat food and drink beverages that might be purchased at the snack bar.  (There is even some talk of snack bar vouchers for Pilot Club members when food is not being served…but that is not a promise).

For some of us, the Pilot Club at last night’s games was the first opportunity in 18 months to be on campus and hangout with old friends of UP athletics…it was a very welcome change to the routine and nice to be in their company again.

Now we have to learn or relearn who all those student-athletes are on the soccer pitch!

I'm a basketball guy, so I was hoping someone more knowledgeable of soccer would comment on last night's 1-0 victory for the Pilots.

I almost turned it off at halftime after UW dominated for 43 minutes and had the Pilots in retreat (or retrograde...where the team delays and gives up space to gain time?), but at the beginning of the second half UP became more aggressive and took control of the midfield while putting together some good runs.  It was a nail-biter at the end as UW pushed and pushed (kind of like the men against the Denver on Monday), but the Pilots held on.

UW dominated, Sophomore Nedya Sawan scored the only goal, and the Pilots are 2-2-0.

There were three separate phases to that game.

The first period was tough to watch as UP couldn’t deal with UW’s press well and seemed to have forgotten how to pass. The only semi-bright spot it that the defence was able to keep UW off the scoreboard.

Whatever the coaching staff did at halftime seemed to settle the team and between the 45th and 64th minute score ( well executed,btw) the pilots played aggressive, passing, competitive soccer that unnerved The huskies. I think they were expecting the second half to go as well as the first did for them.
The UP stamp on the game even continued for a few minutes after the score.

Then it was pretty clear the game plan for the last 20 or so was to just hold on and hope the one score was enough. UP even started taking the ball into the corners to stall at the 80th minute, a tactic normally reserved for the last couple minutes of a match.
UW didn’t react well to this phase and entered a bit of a panic mode, which is pretty surprising for a team that was top 25 this  Spring season.

A good test tomorrow will be to see if they can play more like the middle phase against a Seattle U. Team that tied National champs Santa Clara 2-2 and beat San Diego, PSU, and Eastern Washington.

There have been a couple of schedule changes since the schedule first came out.

The start time for the game this coming Saturday against Colorado College is now 7pm.
The game against North Dakota on Sunday Sept. 19 is now scheduled to begin at 4pm.

All other game times and dates remain the same.

If you added the schedule to your device's calendar it should have updated, but probably wouldn't have notified you of the change. At least that is the case with mine on Apple.

Thanks DD for the update as I probably wouldn't have looked at my calendar having checked the time for this week's game a while back.

A_Fan wrote:If you added the schedule to your device's calendar it should have updated, but probably wouldn't have notified you of the change.  At least that is the case with mine on Apple.

Thanks DD for the update as I probably wouldn't have looked at my calendar having checked the time for this week's game a while back.

In Apple IOS machines you can set notifications to put up a Lock Screen alert, banner or notification when calendar changes occur, either persistent or for a few seconds.

You’ll get choices for type of alerts for upcoming events or shared calendar changes.

Arrived late and didn't miss anything as the Pilots scored 4 second half goals in their win over USD last night.

Next up, NCAA Champion Santa Clara at 7pm on Saturday...the game will be televised locally on KOIN -- Ch. 6.

It was a fun second half. Too bad there was such a sparse crowd there to enjoy it.

A_Fan wrote: Too bad there was such a sparse crowd there to enjoy it.

Mid-week games coupled with the threat of rain are just tough for people to get to, especially for those with school age children.  The August thru mid-September games are always better attended.

It should be dry for Saturday's game against SCU, and I was going to attend, but if I'm honest, I would rather stay home in my leather lounge chair now that I know I can watch it on television (KOIN) instead of spending an hour in traffic and risk getting rained on while sitting in a less comfortable chair.

While living in England for eight years we never gave a second thought to attending matches at least every other Saturday, but now there are just so many other sporting events (college football) we can watch simultaneously through the magic of DVRs, etc., that staying home just seems the better option.