Nobody here has mentioned the World Series yet. Pretty good games, with two deserving teams. Both won 100+ games in the regular season. No wild cards slipped in.

The pitching aces have had some "interesting" results. Kershaw pitched 7 innings for the Dodgers in the game one victory. Verlander was supposed to do the same for the Astros in game two. He pitched 6 innings, but gave up three runs. Then the game became a bit of a home run derby, and 15 total pitchers (9 for the Dodgers) were used by the two teams. Astros win with a 2-run homer in the 11th. Game three last night had another Dodger ace, Darvish. He gave up 6 hits, 4 runs, and only got 5 outs before being removed in the 2nd inning. Dodgers used 6 total pitchers. Astros got a lot of hits but left 11 men on base. But their starter and long reliever combined to finish the game for the win.

Astros are up 2-1 with two more games at home. The Dodger bull pen has been used extensively the last two nights. They're starting Wood tonight, who was 16-3 this year. He better pitch deep into the game, or they could be in real trouble. Astros counter with Morton, who had a good outing in the last game against the Yankees.

Interesting to see a World Series not plagued by bad or freezing weather. The LA games were 100+ temps at first pitch, and the Houston games are indoors. The balls carry, the pitchers aren't having to try to keep hands warm, the fans aren't bundled against the cold. Almost like a series played in September, like it should be.

If you start the game with the best pitcher, and end with a top closer, it is hard to imagine that you could lose 13-12.

Haha, just saw this thread hiding down here....sorry you've been talking to yourself, 7587....kind of like NASCAR these days.

It has been a WS for the ages with all the homeruns and a come from behind rallies that have been the hallmark of excitement in this series....

As a fan of the American League and having been raised to know the Dodgers are the enemy, it's been fun to watch when the Astros win, but it seems every game and lead is so tenuous when the Astro bullpen is trotted out.  Good thing I rarely go to bed before midnight.

Should be a fun or scary Game 6 on Halloween night...I don't see how the Dodgers could win it all on All-Saints Day!

Haha, thanks. I wrote a great post on the Nascar playoffs, but the interwebs ate the posting, and I didn't rewrite it.

As it should be with a Series like this, there will be a Game Seven!

Verlander got the Astros this far, and giving up only two runs and three hits last night should have been enough to win, but his high scoring teammates let him down by scoring only one run.

Dodgers favored tonight, and if the Astros are going to win their first-ever World Series in 55 seasons, they're going to have to hit some dingers and jump on Darvish early to get a quick and substantial lead.

Expecting a quick hook from both managers tonight....I think we'll see at least a few starters in relief roles....

Well that couldn't have worked out better for anti-Dodger fans.....

Score early, cap it off with a dinger, let your starter come on in relief to shut down the LA hitters to earn the W....all while completing the turn-around of the "clown franchise" from 2013 that lost an embarrassing 111 times.

And, they overcame the SI jinx.... 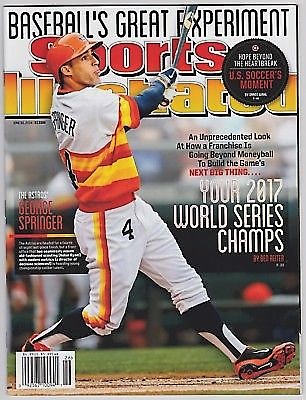 That Sports Illustrated story is amazing. Not only did the writer nail the recovery of the hapless Astros, but they out the eventual W.S. MVP on the cover.

Not the quick game of the start of the series, was it. I went into church for All Saints Day Mass during the 4th inning, and it was still only the 6th inning when I came out. Didn't miss anything critical.

Wonder how much Yu Darvish cost himself on the free agent market this last week.

up7587 wrote:Wonder how much Yu Darvish cost himself on the free agent market this last week.

Yu Darvish may have been tipping his pitches in nightmare World Series performance
http://www.businessinsider.com/yu-darvish-tipping-pitches-world-series-loss-2017-11

I saw that. You'd think his catcher would pick up on it, if the Astros could.