Our favorite WCC coach is back in the Chiles Center this week, Rex Walters. He is the epitome of courtside stability and decorum. Always brings class to every game.

The Dons are another up and down team, hard to predict. They won at SCU their last game, but lost the three games before that, including to LMU and Pepperdine at home. At 4-5 in conference play, their best win is UOP. They have two road wins in WCC play (SCU and USD). The LMU game is their worst loss.

They can score a lot of points, as evidenced by their 2nd half comeback in the first meeting down there. Their leading scorer is Devin Watson, a 6'1" G who is averging better than 20 ppg; he got 22 in the first meeting. Tim Derksen (6'3" G) averages 15 ppg, but he got his season high of 27 against UP in the first game, with multiple easy drives to the rim. Another guard, Ronnie Boyce, is capable of big nights; he got 25 against Pepperdine.

They average 76 points per game; UP averages 78. Shooting statistics are almost even in FG%, FT%, 3P%. Pilots take a slightly higher percentage of shots from 3P. KenPom has UP at 216, USF at 218. Looks to be a pretty even game

A big key will be if we get 20ppg Bryce or 6ppg Bryce. I don't see the Pilots stopping the Dons, so all Pilots are going to have to be scoring to win this one. Gabe T and Jason T are averaging less than 5ppg each over the last 5 games, so I think another high teens scoring effort from D'Marques is crucial. And Jarrel didn't contribute much the last two games after a good showing against BYU. One of those guys (Jason, Gabe, or Jarrel) is going to have to step up and add some points. 10 or so from Jazz would help, too.

Looks like the Pilots are favored by 4.5 (I guess that's the home court advantage?), with the over/under at 165. If Philipp can stay in the game and get a few stops inside, maybe the Pilots can win.

I think we may see a few new wrinkles against USF.....just guessing, but probably more Jazz and definitely more Philipp, if as 7587 wrote, he can stay out of foul trouble.

I would normally like Ray's bulk in the middle, but if the Pilots are to stop Derksen, they are going to have to close the lanes and draw fouls.

Win or lose, I hope the Pilots just get out and play.....and have fun doing it, and get the crowd juiced up.  The Pilots were supposed to beat USD and looked miserable, but the Pilots had nothing to lose against BYU, and they played with passion. Let's see some of that passion against USF, if for no other reason than to beat USF's coach. 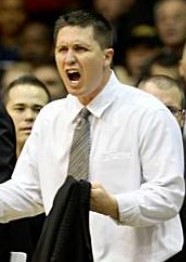 @CoachReveno wrote:Not sure we'll have 62-51 halftime score we had in San Fran but both teams can put up points. USF is 3rd best offense in WCC, shooting 53%.

I have been wondering about key #3. Many times I see the this year's Pilots bat at a ball, or get a hand on it only to have it taken away. I'd like to see: better anticipation, getting and holding good position, and fierce desire to grab and hold on to the ball.

@CoachReveno wrote:Not sure we'll have 62-51 halftime score we had in San Fran but both teams can put up points. USF is 3rd best offense in WCC, shooting 53%.

The over/under is now at a crazy high 166 (UP favored by 5). The Las Vegas punters are obviously expecting a shootout!

Just get some stops, Pilots!!

No one seems to care anymore. Coaches, fans, players... Something has got to give. The biggest question isn't whether or not this coaching staff will be retained, but who in the world will want this job next?

Cannot accept the suggestion that staff and players do not care. There is effort on the court, if not results. It is clear that we are a few short of being competitive in this league.

wrv wrote:It is clear that we are a few short of being competitive in this league.

And have been for quite some time.  All those posts I made last season about needing a material culture overhaul in both the Athletic Department and Waldschmidt Hall still represent my opinion...