Well, Kaylie was recruited to UP to play basketball, but she has yet to suit-up for a game after redshirting this past season.....but she's already in the UP record books!

CORVALLIS, Ore--- Sophomore javelin thrower Kaylie Van Loo stole the show last Friday at the Oregon State High Performance meet. Not only did she win the meet by a staggering eight feet, she also set the school record in the event. Her final throw of 152-00 shored up her victory and supplanted her name in the school record books.

Nathan DeVaughn also helped in making it a banner day for the Pilots with his performance in the long jump. His leap of 23-07.25 won the event, and was the best jump from a Pilot since 1968. 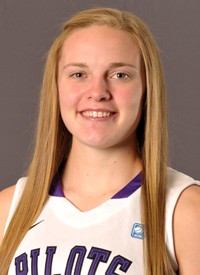