There could be an opportunity to make a move up the WCC standings this weekend, but that would require a couple of wins! First test is on Thursday against a Loyola Marymount team that has lost four in a row and 10 of their last 11 after opening the WCC sched with two wins.

Seems like he's been around forever but it'll be the last time Anthony Ireland will play at the Chiles Center. Ireland has scored in double figures in every game but two since the beginning of 2012-13...and both of those games were last season, and he had nine points in both of those! A great player who will likely get a chance at training camp with an NBA squad.

Pilots are favoured by Pomeroy to win by nine...for what little that matters, given how this season has gone.

This is also another chance for us to get our first series sweep of the season.

Pilots beat LMU at Gerston 4 weeks ago by 14 points. LMU has lost their last 4 games by an average of 17 points. This game is a "must win" for a UP team that needs to build more consistency to go with their big wins this season.

Only 7 LMU players got significant playing time recently. They do not show a center on their roster. Last two games they started 3 guards and 2 forwards, and brought 2 forwards off the bench. Looks like Pilots need to pressure them, control the rebounds, and play tough D on Ireland, Payne and Levin. Easy, right?

LINK
In Anthony Ireland’s career at LMU, he has NOT missed a single game (so far), has been a starter in all but 6 of the 125 games he has played, and has averaged 35 minutes of playing time per game!!

For his career, Ireland has scored over 2,000 points, averaging over 16 points per game.

Ireland was the WCC All-Freshman his first year, and has earned First-Team All-WCC honors the last two years.

I hope many PN readers and students will join in standing and applauding him during his introduction on Thursday night….he has earned it! 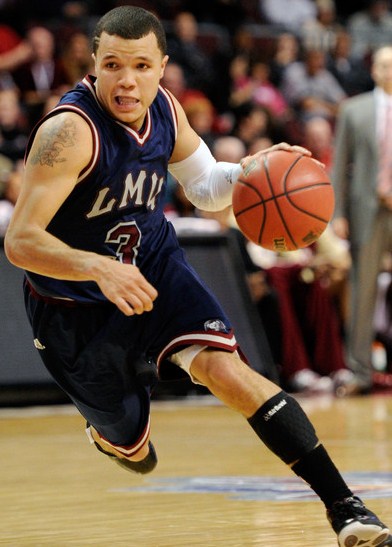 I agree that AI has been an entertaining player to watch over the years, as he has often carried the Lions almost single-handedly to victories.

Averaging 35 minutes per game over 125 games?!  My goodness!!  It will be a real shame that he will have such an off night during his last game at Chiles!!

From the “for what it’s worth file,” here are the opening odds in Las Vegas for Thursday’s games:

DoubleDipper wrote:I think UP would like to see all those games go according to form……

I know it's in Moraga, but that's a pretty big spread in favour of a Saint Mary's team that's already lost by ~20 to USD this season.

DoubleDipper wrote:I think UP would like to see all those games go according to form……

I see you've taken to quoting yourself these days, DD...

Anyone else feeling anxious about tonight's game? We really need this win. against the last place team. second to last home game... we need to dominate.

Ha-ha, yea, “I often quote myself. It adds spice to my conversation.”
― George Bernard Shaw

NoPoNeighbor wrote:Anyone else feeling anxious about tonight's game? We really need this win. against the last place team. second to last home game... we need to dominate.

The only two games I was not anxious about were the GU and BYU games because the Pilots were not expected to win.....and the guys had nothing lose.   That's the way the team should approach tonight's game!!

NoPoNeighbor wrote:Anyone else feeling anxious about tonight's game? We really need this win. against the last place team. second to last home game... we need to dominate.

Not dressed, wearing a soft boot.

So apparently this Kevin Bailey character is an important part of the Pilots offence?

Well it was ugly at times...offence looked completely lost at first without our man KB, then a wild run to get back into it. That was a 22-2 run the Pilots went on early in the second half.

Then with a double-digit lead I thought they could have taken the opportunity to slow things down and play some more conservative basketball but the up-tempo play continued and some turnovers happened to let LMU back into it.

Then they won, so it's all good. And so did Gonzaga, so as hoped Saturday's game will be for fifth place between Pepperdine and the Pilots.

This was similar to the game at Gonzaga: Down big in the first half; start to chip away at the lead the end of the first half; lock-down defense and better shooting combine to create a huge run in the second half, culminating in the Pilots taking the lead.

The difference was that this game was against LMU, not GU, so we were able to hang on to the lead once we went ahead.

The big question now is, what is KB's prognosis?

NoPoNeighbor wrote:
The big question now is, what is KB's prognosis?

I got "being evaluated".

Jackson, a 3.3 star recruit, was injured in November after only four games, but was being highly touted to lead the Lions in the future.

I've seen nothing on the LMU board, but the official roster no longer includes his name.