Eurohoops wrote:In Istanbul, Turkey didn’t face any real competition from Belgium and got the 77-53 win with Bucks’ Ersan Ilyasova having a double double (19 p., 11 r.). Slovenia beat Montenegro 81-74 with Boki Nachbar being once more the top scorer of the winners with 16 points and Ukraine has to thank naturalized guard Pooh Jeter for the 84-83 road win over Poland. Τhe naturalized American guard scored 23 points and the winning shot. Also Bosnia beat Germany on the road 73-62 thanks to 26 points by Nets’ Mirza Teletovic.

So Gardena is just a lovely neighborhood in Kiev? Who knew?

Yudzhin Dzheter wrote:It's like I'm on a world tour. The Beatles, they went everywhere. I go everywhere. I've been blessed to travel and do something I love to do. I'm thankful for it. Who knows where I'll be next?

In life, as they say, the joy is not in the destination but the journey."

Finally, here is the story how Pooh (Yudzhin) became a Ukrainian....... 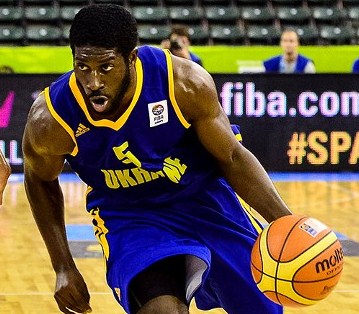 Good Q & A with Pooh regarding his playing in the Ukraine and China.

....and the fact he's making more $$ in playing in China than he'd get in the NBA....but of course he'd still jump at the chance to return one day.

Pooh is on a tear with his National team.

.....the Ukrainian National Team fell a little short in the FIBA European Championship, losing to Croatia in the quarterfinals yesterday.

But they did finish 5th!  Pooh's 20 points led his Ukrainian team over Italy today......and that win qualified them for the FIBA World Cup in 2014!

As I understand it, after a bit of a break, it's now off to China for Pooh.

The FIBA World Cup will be played at various locations in Spain this coming August 30 – September 14, and of course our own Pooh Jeter will be playing for his adopted country, Ukraine.

Just an hour ago the groups were drawn, and I saw this tweet from Pooh (Yudzhin):

Dominican Republic, Turkey, USA, Finland, and New Zealand will be in our group. Yesss Sirrr!!!

This should be a great opportunity for the USA to see what it’s missing without Pooh playing in the NBA.

I understand this is somewhat of a trend, but it doesn't sit right with me. Representing a national team in competition isn't like playing for a professional team. If you have family history, dual citizenship from birth etc., I can sort of understand seeking out a chance to represent a country in the Olympics. Without trying to criticize Jeter, who I know is an upstanding guy, this is different and doesn't work for me.

I don't agree, but that's why they are called opinions.

I should have said I think you are a chauvanist

I understood that was what you were saying. That's definitely a first for me. Anyway, here are the conditions in my opinion where I understand playing for a foreign national team.

1. You have some kind of family history with the country.
2. You have dual citizenship (in conjunction with #1 or #2)
3. You've moved to a country and adopted it as your home or at least a split home, married a citizen, etc.

Beyond that, why don't we just hold a draft of all the American NBA players that aren't playing for team USA and send them off to represent every other country on the globe? I understand why Jeter made the choice he made. I'm sure he's representing Ukraine with character and honor. I'm not trying to personally attack him. I'm just saying it doesn't line up with my opinion of what representing a country in international competition is all about.

Well, I strongly disagree. The rules of eligibility are created to protect the country associations, not to allow players to compete on a world  stage based on athletic abilities.

Pooh followed the rules in place. He has the right to play even by those protective rules.

The ancient Greeks didn't raise a flag for Athens or whoever when an athlete won, they honored the athlete. The Greeks also didn't create an elitist concept of 'amateurism' which was historically created to allow only the upper classes to compete.

And only in fairly recent times has the concept of only being able to play for one country in your lifetime even existed. In Soccer, Alejandro di Stefano, often cited as the greatest player before the media age, played for Argentina, Colombia, and Spain in the 40's and 50's

Soviet pairs figure skaters won gold for the CCCP in one Olympics and came to the USA and won Gold for the USA the next. In both cases, they chose their countries, and genes, accident of birth, or clan affiliation wasn't the criteria.

If the USA feels that it is so important that Pooh play only for the USA they should have named him to the team when they had the chance. Since they didn't, they have no claims of servitude.

His playing for Ukraine is good for the sport, for the reputation of USA basketball, and for UP. Ukraine will get better from his experience, and Yudzhin will get to keep playing the sport he has dedicated his life to at the highest level.

Puts a whole new spin on getting drafted. Pooh is a citizen.

PurpleGeezer wrote:Puts a whole new spin on getting drafted. Pooh is a citizen.

Pooh is also probably the most solid, upstanding guy I've met in many years.

His priorities are in order, and he doesn't put himself first.

Now an "old" man at age 30, Pooh led his Ukrainian team to a 72-62 victory over the Dominican Republic in his adopted country's first game of the FIBA Basketball World Cup.

"A win on this stage for any team is a great achievement. Especially for Ukraine. To play an important role in that win makes it very special," Pooh said after scoring a team-high 16 points in the win.

Pooh had another very good game (24 points/9 assists), but his Ukrainian team lost to Finland, 81-76 today.

The Ukraine plays Turkey on Tuesday and New Zealand on Wednesday before facing the USA on Thursday.

The Round of 16 begins on Saturday.

Not an especially good game by Pooh standards, 10 points; 6 assists; 5 turnovers, but he played almost the entire game and the Ukraine beat Turkey, 64-58. 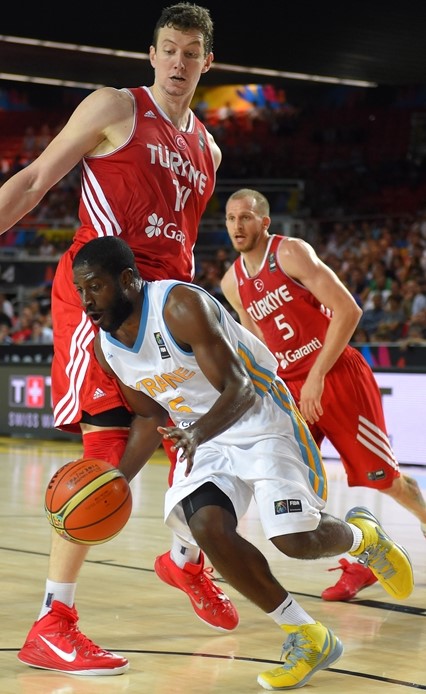 Pooh played fine, 6 assists and 14 points in 34 minutes, but alas, the traditional pregame haka must have gotten to his Ukrainian teammates as New Zealand prevailed, 73-61.

Ukraine still has a chance to make the Round of 16, but face an almost impossible matchup with the USA tomorrow in Bilbao.

Pooh in the Bay Area this weekend for the Raiders game says he had a workout with the Lakers five days ago.

"Making good money in China, but it would be nice to get back into the NBA again.....it's not necessarily about the money."

Hard to say what will come of it....but it's always good to get more exposure in the US.

What do they pay a guy like Pooh in China? Just curious.

pilotram wrote:What do they pay a guy like Pooh in China? Just curious.

Well, that's not the kind of question I would ever ask Pooh, but as he signed with the NBA Kings for just under $500,000 a few years back, but now has much more experience and skill....I would guess it's got to be three times that amount, at least.  But that's only a guess!

I know his agent negotiated pretty hard with the Shandong Flaming Bulls and it was a multi-year contract that he signed.
Presumably there would be some sort of buy-out clause if Pooh were to get another opportunity in the NBA.  I'd heard some talk he was being considered by a couple of NBA teams towards the end of last season after their PG's were injured, but nothing ever came of it.

His performance with the Ukrainian National Team did not go unnoticed....I think he'll be asked to a fall camp with some NBA team.  If I'm not wrong, I believe the Lakers currently have 13 guaranteed contracts on their 15 man roster.  Of course he'd love to play for his "home team," but if the Lakers don't sign him I think he'll have other opportunities.