Marquette finished last year as the Big East Conference champion and ranked #12 by the RPI.  They received a #4 seed in the NCAA Tournament and made it to the round of 16, where they lost in a shootout to BYU.

They graduated four of their starting players from last year but the bulk of their scoring and assists are back as is their GK.

Although they lost a pre-season game to Wisconsin last week 5-1, they look to be formidable opposition.

I wonder if we will se Larry Williams?

As one set of Portland women’s soccer fans gnashes their teeth, another could be jumping for joy for the next few weeks, as Pilot supporters could be celebrating their best squad for some time. Portland has certainly taken their lumps the past few seasons, barely squeaking into the tournament in 2011 before a pedestrian 11-5-5 last season. Garrett Smith’s side was amazingly young though, and with the club set to return ten starters and add in a big-time recruiting class, expectations on The Bluff are as high as they’ve been in a while. While many fans will have an eye towards the showdown at Stanford next Saturday, the Pilots can’t overlook Big East giants Marquette in the opener. Smith is taking some risks this season with some surprising tinkering with the club’s personnel, moving last season’s goalscoring dynamo Amanda Frisbie to center-back (!). The return of a healthy Micaela Capelle may have certainly influenced Smith’s decision, while the addition of hotshot forward Danica Evans could ensure the club doesn’t miss a beat offensively. With Michelle Cruz also having played in defense in the preseason friendly against Portland State, there might be some teething issues earlier if the club does keep the defensive alignment that started against PSU. They’ll be hoping those issues are kept to a minimum given Friday’s opponent.

Marquette may have been made to look sheepish in a crushing preseason defeat to Wisconsin, but make no mistake, this is still a Golden Eagles side with tons of talent. Front and center is attacker Maegan Kelly, equal parts finisher and playmaker, who could make the Pilots’ defense life very difficult if on form on Friday night. Senior Taylor Madigan actually scored more goals for the club last season and gives Friday’s visitors a devastating one-two punch in attack. Much of the rest of Marquette is very much a blue collar side of grinders, but extra attention may be paid to the backline, which has to replace the talented Ally Miller this year. Senior Emily Jacobson got a U23 callup in the Spring and will be looking to hit new heights in her final year with the Golden Eagles. Sophomore goalkeeper Amanda Engel was a revelation as a rookie and will be hoping to be just as good this year, though she’s bound to be a busy camper against an explosive Portland offense. Questions about Marquette’s ability to hold up against top notch teams’ attacks continued to be asked after shellackings at the hands of North Carolina and Duke last year. If real growth hasn’t been made, the evidence will likely be on hand in early games against the Pilots and against UCLA next Friday. A convincing win here could be an indicator though that the Golden Eagles might be able to fly to new heights in 2013.

Portland went with the diamond 4-4-2. Four freshmen started tonight, Viera at LB, Edenstrom at CB, Boon at RW, and Evans at forward. They all did well, although Edenstrom was done for the night after hitting heads with Frisbie in the first half.

The player who stood out to me the most was Kurle. She was huge at DM and could really break out this year. Sippel torched the left side tonight and she could be another one to watch this year.

The Pilots will want to work on connecting on the final ball, and the freshmen tend to want to just take on defenders with speed, which is not enough anymore, but they'll learn. Marquette got better in the second half and spread out the defense a little more. They're pretty good and it was nice to play a team with enough quality to show the areas the Pilots could work on.

I hope the made Edenstrom  count to ten.

“@AlyssaE_22: Got three staples in my head tonight, and we won! What a great first game ⚽”

Frisbie had a pretty good knot, too.

Solid performance by the Pilots. As always, UP is trying to play the ball around and with every new season there are missed connections in these opening games. And some of the freshmen are adjusting to the pace of the game. But you can see the intelligent and creative intent. And the talent. Marquette played a more physical and direct game. Pilots had more chances around the box and thoroughly deserved the win.

The only change to the starting line up was Edenstrom alongside Frisbie at the back, with DeGrood on the bench. Four freshmen starting. Hard to tell much about Edenstrom because she and her partner whacked heads after 15 minutes and she was done for the night. Three staples did not dampen her spirit, she was chirpy after the game. No surprise if she is held out of the Ducks game.

Kendrick played the final 30 minutes at center mid (for Parker) and LaPrevotte had a cameo 15 minutes. All of the freshmen are doing well and don't look out of place, which is encouraging for depth and the teams chances of staying sharp through the season.

Yet again the PA system was malfunctions at the start of the game and died as they were introducing Pilots starters. No sound for anthem so the crowd just went ahead and sang it. Very cool.

It was a step forward for the team, they are starting to recognize each others tendencies, once they really jell they are going to be hard to beat. What a luxury to have your starting defenders go down and be able to bring in two top quality replacements. I was surprised at Kendrick's speed, she can really fly. Evans sort of reminded me of Tiffany the way she dribbled into a crowd and came out the other side with the ball.

When are they going to spring for a new PA System. 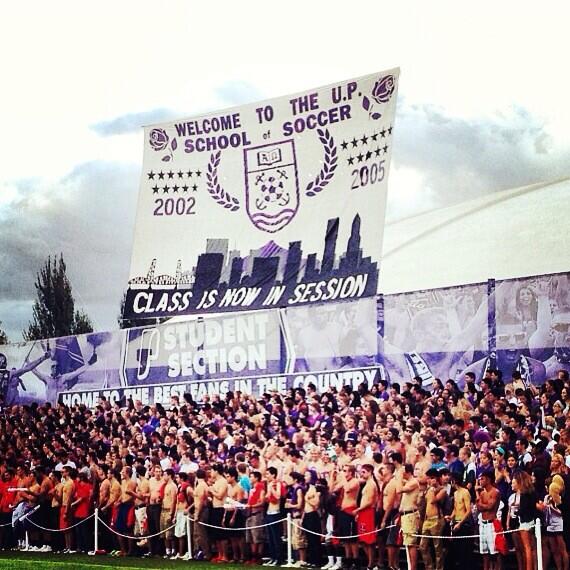 From the official Marquette site:

The Pilots used the backing of a rowdy crowd and struck quick, deflecting a rebound back into the net to take a 1-0 lead in the 21st minute.

We must be a bloodthirsty horde when the Dawgs are at Merlo.

DoubleDipper wrote:......hmmm, no mention of the tifo; I thought it was VERY good:

And now the video.....I think you've gotta love the music, if nothing else: