Geezaldinho wrote:This falls under a similar constitutional right. The first ammendment has been interpreted in an NAACP case to grant freedom of association. The premise is that no outside body can regulate who can associate with whom, and when a person can decide to terminate such association.

Is this NAACP v. Alabama? That's a very interesting argument you have there.

Yeah, the case was this one, for those interested.

The NCAA still has problems with the concept that they can't decide who you can associate with.

The Warren court, in a decision written by Justice Harlan, decided this:

In an opinion delivered by Justice John Marshall Harlan II, the Supreme Court decided in favor of the petitioners, holding that "Immunity from state scrutiny of petitioner's membership lists is here so related to the right of petitioner's members to pursue their lawful private interests privately and to associate freely with others in doing so as to come within the protection of the Fourteenth Amendment" and, further, that freedom to associate with organizations dedicated to the "advancement of beliefs and ideas" is an inseparable part of the Due Process Clause of the Fourteenth Amendment. The action of the state's obtaining the names of the Association's membership would likely interfere with the free association of its members, so the state's interest in obtaining the records was superseded by the constitutional rights of the petitioners

They went on further to decide that an individual had the right to terminate any association without consequence.

The hero in this case was Attorney Robert Lee Carter, later appointed as a judge by Richard Nixon. https://en.m.wikipedia.org/wiki/Robert_L._Carter
With the current deadlocked court, it might be a good time to push a precedent.

Hey, Geez, have you initiated this plan yet?

Geezaldinho wrote:Maybe I'll buy season tickets to Gonzaga and then buy hookers and blow (or peanut butter spread) for their next Sabonis.

There's probably a waiting list for GU tickets, so get in line quickly.

up7587 wrote:Hey, Geez, have you initiated this plan yet?

Geezaldinho wrote:Maybe I'll buy season tickets to Gonzaga and then buy hookers and blow (or peanut butter spread) for their next Sabonis.

There's probably a waiting list for GU tickets, so get in line quickly.

According to the NCAA, a five dollar donation to the university is enough to make me a booster for life. In fact, just giving one of their players the peanut butter is a violation.

Geezaldinho wrote:In fact, just giving one of their players the peanut butter is a violation.

Geezaldinho wrote:In fact, just giving one of their players the peanut butter is a violation.

DoubleDipper wrote:It's too bad 2011 grad and current Pilots DBO, Kramer Knudson, can't coach young Mr. Smoyer, but at least he can be a mentor.... 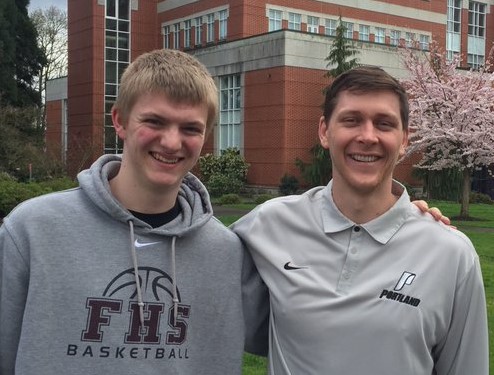 Still no word from UP whatsoever regarding Kramer's promotion from DOBO to MBB Assistant Coach, but he has been spotted in the gym working up a sweat while coaching-up the big guys.....

Joseph Smoyer won't be enrolling at UP until second summer session, but you can bet he too will be getting a lot of 1 on 1 attention from Kramer...

2016 H-Squad PG Andre Ferguson has committed to Portland, per source.

2016 H-Squad PG Andre Ferguson has committed to Portland, per source.

The first search results I see describe him as:

-Savvy point man with handle, good passer, ability to probe defenses, can score in bunches, shoots it well from pull up to 3pt range, defends.

Considering he went to Loomis Chaffee in Connecticut after graduating from HS in California, http://www.newenglandrecruitingreport.com is usually a good source of info on these prep guys.

They have barely anything on Andre Ferguson. Not ranked in their top 40 Connecticut guys for Class of 2016. Just a couple of preseason pieces that said he was expected to lead Loomis Chaffee in 2015-16, and one after the year where he was All-Class A honorable mention (AAA, AA, A, B, C, D are the New England classes).

So the last (?) available scholarship for 2016 goes to a prep school guard. Not the direction I thought the new staff would go in. Very interesting.

edit: Highlight film from last year with Loomis Chaffee - http://www.hudl.com/video/3/6933071/5721e1419a91677e74b4e523 - lots of drives, threes, and pull-up jumpers from medium range. His shooting style looked vaguely familiar to me...I think that's because it's similar to the shooting animation on College Hoops 2K7 for the Xbox

Interesting that the coach pulled the trigger. Johnson could have played some point this year. Obviously coach Porter and staff thought Ferguson worth bringing aboard immediately rather than waiting to recruit someone for next year. Film looked pretty good. Let's hope he is productive.

Dean Murdoch wrote: So the last (?) available scholarship for 2016 goes to a prep school guard. Not the direction I thought the new staff would go in. Very interesting.

With the loss of Bryce and his ability to play PG when needed, there was a definite need for a backup to Alec and/or Jazz if either were injured.  Also, there is now a much longer bench if the need arises to redshirt Monson along with the Porter brothers and Smoyer.

Face it, at this point in the preseason (UP students begin moving into the dorms in 2 weeks), UP was not going to get a Center who is better than Barreno and Hartwich, but they may have gotten a PG who is better than Jazz.  Next year it may not be enough to have only Hartwich and Smoyer at Center, but if Philipp's game has matured as much as his body, he could be a big contributor this year and next, and under Coach Knutson's tutelage, Smoyer is already developing the moves and shots of a very good player....now UP fans just have to hope Coach Cat can help him develop his body over the next 12 months.

IMO the commitment of Ferguson is a very good sign of more good things to come at UP and a real boost for this year's team and the next four years....I just gotta hope Andre continues to sport that 60's/70's look with the headband.

Dean Murdoch wrote:18 months later, Jashaun (Agosto) is rated as the #1 player in Washington's Class of 2016 by Seattle Basketball Services…but he's still only got one offer, from the Pilots.

One day after UP signs Andre Ferguson, and almost three years after it was reported that UP had offered 2.7 star point guard Agosto, he reportedly signs on with the LIU Brooklyn Blackbirds.....in many, many ways, a long way from Seattle.