The U.S. Under-20 Women’s National Team will come together for a training camp at the University of Portland from July 2-11 as the squad continues preparation for qualifying for the 2014 FIFA U-20 Women’s World Cup in Canada.

The eight-team CONCACAF Qualifying Tournament that will send the top three finishers to World Cup will be held from January 9-19, 2014, in the Cayman Islands.
U.S. head coach Michelle French has called up 27 players for the event, which includes six goalkeepers, but not Jane Campbell, the starter for the 2012 U.S. U-17 Women’s World Cup Team, who like several regular call-ups, is currently committed to summer school.

French, an All-American at the University of Portland and an Olympic silver medalist for the USA, will test her squad in scrimmages against two National Women’s Soccer League teams during the camp, taking on both the Seattle Reign and the Portland Thorns.

Only two players on the roster are not currently in college or headed to their freshman year this fall. Those are forward Lindsey Horan, the teams’ only professional player, who scored 17 times for Paris Saint-Germain in the French First Division this year, and midfielder Andi Sullivan, who just finished her junior year of high school.

anyone know practice schedule so we can come take a look...

Twitter has the Thorns and U20s scrimmaging tomorrow behind closed doors. No location mentioned.

PurplePrideTrumpet wrote:Twitter has the Thorns and U20s scrimmaging tomorrow behind closed doors. No location mentioned.

And a few others were there too.... 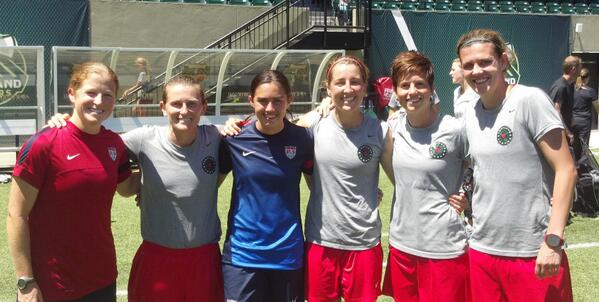