DaTruRochin wrote:80-20 over CBA?!?  Somehow I think VDM made sure the boys had some extra motivation to not lose to his former schoolmates....

It was good to see Alec, Bobby, and Korey come through with good games, but our two CBA grads, Thomas and Volydymyr combined for only 13 points on 6 of 19 shooting.

Ryan's 16 points, 8 rebounds, and ZERO turnovers is a good sign as the team begins to jell with just two more games before almost six weeks away from practicing as a team before the official beginning of D1 practice on September 27, I believe.

(It is my recollection that starting this year, the NCAA will allow teams to conduct 30 days of practice in the six weeks before their first regular-season game; in the past, practice began roughly four weeks before the regular season).

I'll throw a third score out there. I am pretty sure the final was 86-20...it was an absolute shellacking.

OK, thanks, you've got to be correct!  I was getting tweets from another source, and I now see where they were "tweeting from a bar," not the game.

It's not even 6 AM here in Scotland as we head out for another round of golf in the mist.....so, as I've written before, any posts from me before 9 AM should be "taken with a grain of salt."

DD's source isn't the only one seeing conflicting numbers.

The athletic site's writeup mentions both the poor CBA shooting and 86-60 score, but the latter can be forgiven to a typo (bold added for notation):

Portlandpilots.com wrote:Portland raced out to an early lead and never looked back en route to an 86-60 victory over the CBA All-Stars Thursday night in the third game of its Spain Foreign Tour. Senior forward Ryan Nicholas led four Pilots in double figures with 16 points, while Portland's smothering defense never allowed CBA to get into an offensive flow.

The Pilots forced CBA into 28 turnovers and 7-for-45 shooting from the field for the game.

More stats are in the link before the excerpt.

DD's also right about the early practices.  Thanks to the Division I Legislative Council, men's basketball teams can now have "30 days of practice in the six weeks before their first regular-season game." The Legislative Council also removed the 5PM start time to allow for more flexibility for kickoff events in a separate measure.

The athletic site's writeup mentions both the poor CBA shooting and 86-60 score......

I'm guessing there was just a translation problem from Spanish in the bar to English (well, US English).

Veinte and seisenta sound exactly alike...after a glass or two of cognac.

The Pilots are playing right now, but the audio stream is way too choppy to follow the game or even know where in the game it is, but I have picked up that Sharp is on fire, and the Pilots were up big 70-37 about 10 minutes ago.

I am the only one who doesn't know or see where the game times are posted, with game information?

The audio stream is available on the "Pilots Video" link on portlandpilots.com. I am only getting a few seconds of audio here and there, every couple minutes though.

Well, actually I'm pretty sure they did, but I've found my sources aren't as reliable as they could be while bar hopping through the Canary Islands.

It was another lopsided win for the Pilots in Gran Canaria today….111-48 over CB Select.   You’ve gotta bet the guys loved the fast paced transition game that resulted in scoring over 100 points the last two games.

Flying back to Madrid tomorrow, and then heading home on Tuesday after some fun, some sunburn, and some significant gains on the court together.

Im sharing with you an exciting play from the Pilots vs CB Gran Canaria Game (the real name of the was StreetFlavour ELITE Team and not 'CB Gran Canaria'):

Hope y'all like this one too! Our own video highlight will be published soon (we make the best basketball videos in spain, so make sure to suscribe our youtube channel!)

It was a great experience to play against your guys. Good luck for the season and see you next year if you guys repeat on the island.

Thanks, Chris... I look forward to seeing highlights from the other team's perspective, as the Pilots' version doesnt show what we allowed on defense, etc.

How awesome is this?!  You may have already seen it, but I figured it is worth sharing again here.

While the team was on a boat excursion in Spain, Coach Wolf met a couple from England, and the couple told him at the time that our players "... single handedly changed his opinion of Americans which was not very good....."

That would be compliment enough, but Coach recently received the following email from the couple:

Can i just re-iterate what i said on the catamaran whilst enjoying our holiday ,that the Boys/Men from your Basketball Team showed complete respect, courtesy, politeness and represented your University in an impeccable manner. This was so refreshing to see that a group of young men put others first and not one of them was seen to be rude towards anyone on-board the catamaran. They are indeed a credit to themselves and we wish them every success in the future and we have already started to follow the regular updates on your website. Thank you for your time and your sincere kindness and friendship.

Please pass this email onto your coaches and inform your team that we do wish them all well for the future.

With so much in the news, generally, about athlete's behavior, it is awesome to see our guys representing us so well!

They probably talked to Barker and thought he was American

Geezaldinho wrote:They probably talked to Barker and thought he was American

Um, using your previous discussions of the North and South Americans as one....he is!

We might have to get a reaction from DeanMurdoch to get a better perspective, however.

I knew you would bring that up...

But I was thinking of the Canadian comentator who said " that is so American" when Leroux shushed the crowd in Toronto. 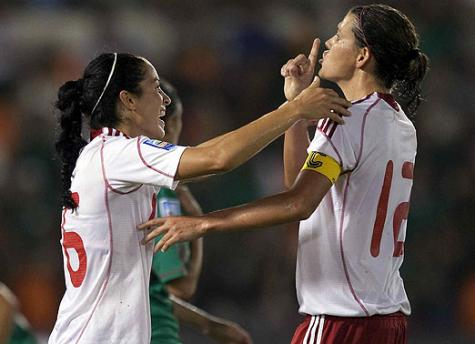 DoubleDipper wrote:We might have to get a reaction from DeanMurdoch to get a better perspective, however.

Can confirm that we are a polite and apologetic people. And if Geez hadn't posted the Barker comment, I was going to!

I got nothing against Sydney. The fans were (rightfully) giving it to her all game long for picking the US instead of Canada, and she (rightfully) gave it right back after her goal. In my opinion, this kind of controversy is awesome for the game! Lots of passion shown by fans after a harmless gesture.