Game 2 may actually be against Angola, not Ivory Coast.

Will probably be SID Jason Brough with the call...also guessing he'll grab Marshall Cho to do colour. And Angola will be a formidable opponent. According to the current FIBA rankings, they're No. 15 in the world.

I will endeavour to listen.

From the Pilots Bog -

The UNC-Greensboro men’s basketball team is staying in our hotel and played Angola on Saturday. Angola was leading 32-11 after the first period and cruised to an 82-62 victory. Chatting with the Greensboro staff they described Angola as big, skilled and professional. It should be a very good test for our guys out of the gates.

UNC-Greensboro is a 300+ RPI team...let's hope the Pilots can give Angola a bit better of a run than they did.

Let's hope this is a sign of good things to come.

Yeah, let's hope so. While the audio was pretty hit or miss there were a few updates, and I was pretty impressed that the team fought back from 15+ points down, and they went on a 9-0 run to end the third quarter. That's pretty impressive.

Good thing Coach Scott had the guys working hard at conditioning all spring/summer...it was too, too hot in the gym tonight.

So, can we safely say we are better than UNC-Greensboro?

NoPoNeighbor wrote:So, can we safely say we are better than UNC-Greensboro?

DD, are you in Spain? Or did you see someoe else talking about gym temp?

DeanMurdoch wrote:DD, are you in Spain? Or did you see someoe else talking about gym temp?

Geesh, no....too hot in Spain in August; we're well north right now, but it's very easy to IM with those in Madrid while on the Continent or even in Scotland.....

Just like I watched him do in practice, Tanner really stepped up last night....(um, I guess it's still tonight in Portland, but it's VERY early in the morning here.)  Too many turnovers, but for the first game of the tour, I'm told the coaches were pretty pleased.

Apparently there was a very large contingent of Angola fans at the game, so the Pilots got to feel a bit of the passion that goes with international sports….including all the noise makers that are banned by the NCAA.

Aitor and David are on the trip, but will not play.  Rhino's busted a bunch of his chin stitches (received in Portland) in the game, I'm told, so had to head to the hospital after the game for more stitches.  Tough kid.

Ha-ha, coincidence?  I just met a gentleman from Angola…..hmm.

Anyway, we talked a bit about the Angolan team, which has become a huge hit in Angola.....turns most of the players have a great deal of international experience, and much like BYU, the average age of the team is 28+.

I thought #1 and #2 looked pretty good for the Pilots in that clip!

Early indications are pointing towards this team being as we've been hoping for...a vast, vast improvement over the 2011-12 and 2012-13 seasons.

Will be another interesting game tomorrow (later today) against Venezuela. Looks like Greensboro shortened the bench and had a better outing than they did against Angola, only losing 60-53 to Venezuela on Sunday.

Here is Coach Wolf's post game comments (from the Angola game), including some updates on what the team has done so far in Madrid:

Back-to-back games, but it's also learning about the culture of another country....

The guys are off on their "Amazing Race" today, catching the Metro to Puerto del Sol......"the centre (as DM would spell it) of Madrid's radial network of roads." 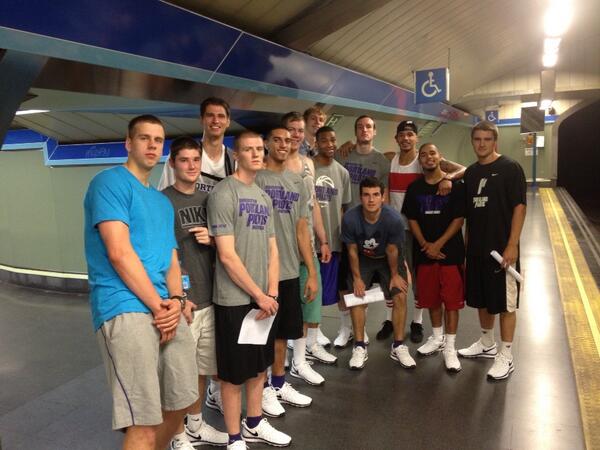 It seems like Rev has been preaching pushing the ball out in transition more, but not sure if the copious amounts of transition highlights are because of a focus on that in practice, or lack of structure this early into the year, or just a mixture of both.

With our roster it seems that transition can work. I think that is where Korey, Bryce, and Kevin really flourish. Don't really know much about Alec's game but it seems that he's pretty comfortable in transition as well. Also, it gives the shooters the opportunity to hit shots in rhythm (compared to last season where there was no rhythm/flow in the offense whatsoever).

Again, impressed with fighting back after being down 19. They basically turned a game that was a few positions from being over, into a nail-biter. Impressive especially for the first game.

Also nice to see the guys having some fun on the bench. Just from a gut feeling this season already has more optimism associated with it. Last season heading into there were a ton of questions and it just seemed like we were keeping our heads above water. Hopefully this foreign tour can help this team gain a little traction before November.

Got to limit turnovers. If there is one area that Ryan and Kevin could both really improve it would be the turnovers. I think having a true PG in Alec, and better shooters could and should help.

Nice showing from Tanner which is good to see. Looking back at last year's stats it's pretty interesting to note he had 5 double digit scoring nights, all of which he shot over 50% from the field. He also had eight 0-for games. That's why his playing time was so inconsistent, but good news for him is that if he can show some consistency, he can earn that playing time.

Hopefully the audio is a bit better today and we can get a better feeling of the new guys. Still excited to see what Alec, Bobby, and Voldy can bring.

Transition was probably the primary area that was worked on during practice....at least when I was there.  Remember, they're working with a 24 sec shot clock.

Tanner....last year he helped the team even when not scoring because opposing coaches always knew he was a threat to go on a scoring binge, and they had to guard him closely which created better spacing and scoring opportunities for the others. Rev often speaks of his contributions even though his "going cold" on a number of occasions is inexplicable.

Tanner....last year he helped the team even when not scoring because opposing coaches always knew he was a threat to go on a scoring binge, and they had to guard him closely which created better spacing and scoring opportunities for the others. Rev often speaks of his contributions even though his "going cold" on a number of occasions is inexplicable

Yeah, although last season there was no one else to space the floor, and the scouting report was that he was streaky so shut him down early. Bobby was brought in specifically for his shooting so if Bobby can draw some of that attention away maybe Tanner can find his stroke, and there will be multiple people who can create space for everyone else. Our team is by far better when Tanner is hitting, so hopefully he can do it on a consistent basis.

I think back to when Stohl was on the team, and I'd have to say he made every single person on the team a better shooter. During those seasons, the shooting was contagious, and at times you could see how frustrated the opponents got when they would stick to Stohl only to have TJ or Ethan or Nik or Nem hit a shot. Or even when they missed there was space to get an offensive rebound, because everyone had to stay on their man. Hopefully that's what Bobby and Tanner can provide.

Maybe it was jetlag but outside Tanner Riley, who is apparently impervious, our shooting from the wings and guards was abysmal. Our new Sharp shooter from Santa Rosa did okay. I hope that the new day brings better shooting from Wintering, Bailey and Pressley. Pilots need to shoot better than 25 of 77 to compete in the WCC, or so I assume.

From the highlights, looks like most of Riley's points were on fast break layups.

Highlights from the Venezuela game today (or whenever it was).

Venezuela was a beast of a team physically....older, stronger, seasoned, and steeped in the international game.  Losing by 3 points to a team that has a nucleus that's been together for quite a while is not unexpected.

Yes, the shooting still left something to be desired, something like 26/65 (40%), but of consequence was the inability to muscle in for rebounds on either end and Thomas' inability to get to the hoop.

So far the Pilots have played better than they started out on the Australia trip, IMO, and that was not long after the season ended.  This trip they are assimilating 3 new guys including a PG....so the learning curve has got to be steep.

Today is a travel day and a light practice before finally playing a team more their age when they take on a U-20 team on Thursday.   After the dreadfully hot weather of Madrid, near 100 F., I think the guys will enjoy the "cool" winds of Las Palmas and temperatures in the mid to upper 80's.

Wonder how much of a change it is for the guys to be playing FIBA rules.

Under FIBA rules, for example, you can knock away the ball after it hits the rim even if it's over the cylinder (as long as you don't interfere with the net). That exact play happened in one of the clips, but it looked like it was called goaltending because the Venezuelan hit the mesh.

Other random FIBA rules besides the obvious shot clock difference: can't inbounds from front court into backcourt, way wider keys, and I think FIBA recently moved the three-point line back a bit as well.

DeanMurdoch wrote:Wonder how much of a change it is for the guys to be playing FIBA rules.

I believe there's got to be some adjustment to the rules, but I think the physical nature of the FIBA game playing against mature, full-grown men is the biggest difference for a college player.

Thomas, who played the international game before UP, told me he didn't think there was a LOT of difference based upon the rules, and didn't feel the 24 second clock changed things that much.  Korey mentioned the FIBA ball, which is apparently the same size as the college basketball, is "more slippery when there is moisture on it”, and there is a lot of “physical contact.”

Size, experience, and skill level of the opponent seems to be the biggest adjustment to this point in the trip.

80-20 over CBA?!? Somehow I think VDM made sure the boys had some extra motivation to not lose to his former schoolmates....