From the Catholic Sentinal

“I am excited to be a part of Marist High School and its athletic program,” Hanson said, adding that Marist seems like a "perfect fit."

Reflecting on her own approach to soccer, she emphasized her background at UP. Clive Charles, University of Portland coach during the time she played, "will forever be a mentor of mine and touched the lives of so many that he worked with," she said. "He had an amazing ability to teach life lessons through soccer and developed the entire person. He was a huge inspiration to all those who played for him. It has always been my goal to pay forward the passion, leadership, respect, professionalism — and the list goes on — that Clive taught me."

Hanson was a four-year starter for the Pilots at center back. She was named to Soccer America’s 11-player MVP team as a senior. She was selected ninth overall in the 2003 professional draft by the New York Power. She also played on the the U.S. National Team.

A native of Newport Beach, Calif., Hanson, formerly Lauren Orlandos, graduated from UP in 2003 with a bachelor’s degree in Interdisciplinary Studies. She is married to Travis Hanson and they have a son, Cole, and a daughter, Taylor.

Hanson has worked extensively with club teams in the Portland area. As a member of the FC Portland coaching staff, she assisted the U-16 girls Maroon team to both the 2005 and 2006 state championships.


I hope they don't try to challenge her in scrimmage...

From what I know of Marist, this is a really great fit. Somewhat like OES and Catlin Gabel here in Portland. An interesting but not widely known fact is that Judge Coffin (US District Court Magistrate officed in Eugene) has coached the Marist boys. I don't know if he still coaches. Much like my starting years coaching tennis at St. Mary's Academy, he's managed to fit it in with a full time plus workload. Those of us who do this -- and I know of several others -- are sort of crazy.

More like Jesuit I am told by an alumnus. They disassociated themselves from the Marist brothers a few years ago. Still Catholic, but lots of well off non-Catholics in attendance.

Congrats to her. Her MVP-level play contributed greatly to the '02 title run.

Remember watching the 2002 "round-of-eight" match at Stanford, sitting in the small bleachers behind the south goal.

A group of Santa Clara players, having qualified for the semi-final round with a win earlier that day, were right in front of us--watching the run of play, most of their comments were about Lauren's defensive prowess.

Hanson won both of her NCAA Women’s Cup championships with the University of Portland. In 2005, she was an assistant coach with the Pilots and in 2002, was the team captain of Portland’s championship team. 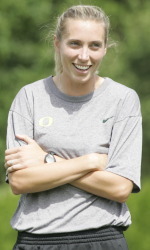 Terrific hire for them. She will do well.

I wonder if this means we may be seeing the Spartans on the Pilots schedule in the future.