I'm especially excited to see Alyssa play; she was "named the league's most offensive player in 2009."

Maybe other teams got upset when the 6-0 center back drove into the box . . .

Wondering who of Frosh might challenge upper class for playing time. Video makes you exciited about the possibilities.

F: I expect Frisbie and Capelle (hopefully she'll be healthy) to start. Boon and Evans can be spark off the bench not to mention returning Jeter and Cameli. Jeter's size and speed will be a weapon against certain opponents especially if we see the maturing we often do in sophomores.

MF: I expect Wetherington to challenge Parker for minutes. Hopefully Ellen will be healthy. Expect Kurle will start at holding mid. Lots options on the outside with Cruz, Sipple, and LaProvotte returning. Some of those could play at outside back too with loss of Kendall and Taylor. I am expecting big improvement in Sophomore season for LaProvotte as we often see the SO mature. Viera, Kendrick, and Elmer have shot at some minutes too and Viera could move forward as we know she only lags Tif as top Oregon HS player in goals scored.

I wouldn't be surprised if Edenstrom or Hall get minutes on the back line along with returning Bridges and McCluskie. DeGrood is also candidate for big improvement SO year.

I assume will have some news on new GKers in '14.

I think just having the luxury of being able to have fresh players on both ends of a weekend will be huge.

I went to practices last year wondering if we would be able to field 11 players the next game.

Any contribution from this group is a bonus. We have 9 starters returning. The key thing is that these players be ready the following season because the upcoming senior class includes many of those 9 players.

Dont get me wrong, I'm excited to hear Lisa talk about all of them. It's clear from her description that several players could be making a change of position from where they've played in high school. That might take some time.

I would hope the more freshmen who are able to crack the starting lineup this upcoming season, the deeper and better this team should be.

With this group of incoming frosh, I think it's going to be very competitive among all players to get into the starting lineup. I think there will be very few players who are assured of being on the field at the beginning of games. I also wouldn't be surprised to see some of the returning players playing positions we're not used to seeing them in.

With both Taylor and Kendall gone there is plenty of opportunity at outside defense!

And therein lies the key for the team in replacing those two players, especially in the case of Kendall Johnson. Hopefully, there will be another Kendall Johnson type player or players coming in this fall. 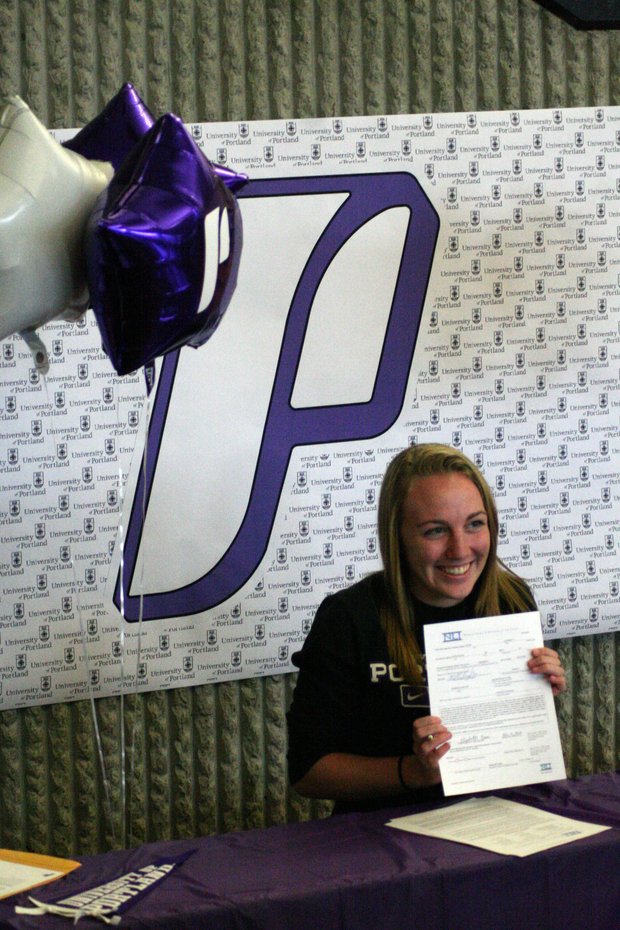 "Portland has been my dream school since I was little," Boon said. "I remember rushing off the bus in second grade to watch them win the national championship in 2005. That's kind of where it all started for me."

DoubleDipper wrote:
" . . . I remember rushing off the bus in second grade to watch them win the national championship in 2005 . . . "

DoubleDipper wrote:
" . . . I remember rushing off the bus in second grade to watch them win the national championship in 2005 . . . "

Well, if it makes you feel any better, either Ellie skipped a three grades or she was in the second grade when the Pilots won the NCAA Tournament in 2002.....not 2005.

We have a very young class, apparently.

We will all feel old when the son or daughter of a player we watched shows up on the pitch.

If she was getting off the bus to watch the finals, then it must have been a seven day a week kindergarten.

OldePilot wrote:If she was getting off the bus to watch the finals, then it must have been a seven day a week kindergarten.

Maybe her church had buses.

The ECNL has an event in So. Cal. this weekend. Roster for the event is listed here:

Some of them are on recruiting SS but most not. Any of these ladies coming to UP?

I think those kids are 2015+ kids. It's a bit early, though some schools already have commits.

I'm not sure why you would pay for this camp if you have an offer from a school.

Our 2014 class is about full. I think all that is needed is a keeper to fill the class out.

Per the recruiting SS:

Bosson & Manfredonia are '13's going to Nev and SD respectively.

There could be a number of '15's but I don't find many on the SS to link them up.

gnarly wrote:
As to 2014, why have we only learned of only 4 on the SS for UP. BS says we have 6. Why don't we have better info from those in the know on PN rather than BS??

Ask yourself how reliable BS is.....

Better yet, compose a convincing sentence about the superior reliability of BS.

Give it your best shot.

cbg's webpages are the best source for reliable recruiting information, as he typically checks his information with player parents and/or club coaches. Almost everything you see on BigSoccer is from cbg. So, the reason you sometimes see more on BigSoccer than on Pilot Nation is because you aren't lurking around cbg's pages and reporting back here as frequently as some BS posters are doing over there.

Regarding any "inside" information from the Pilots' staff, they are quite tight-lipped about recruiting and those of us, if any (and I don't know if there are any), who have heard some inside information would not be likely to disclose information that neither the Pilot staff nor the player or her family have revealed publicly.

UPSoccerFanatic wrote:Regarding any "inside" information from the Pilots' staff, they are quite tight-lipped about recruiting and those of us, if any (and I don't know if there are any), who have heard some inside information would not be likely to disclose information that neither the Pilot staff nor the player or her family have revealed publicly.

This applies to all the sports at UP....there are reasons to inform some "trusted" sources because they are often able to help the process and make decisions and plans around potential recruits. Sometimes it’s even important to even know which potential recruits to "avoid" to keep from screwing up the process or creating a non-compliance issue. If those trusted sources all of a sudden became providers of “inside” information…….well, it would be counterproductive to say the least.

And then of course, there is that Garrett had been pretty hard headed about following my directives....

No telling how much better the team would be if Garrett would only take coaching tips from us.