After last night’s drenching and the drubbing of the men’s team, this game against USF was just plain fun to watch; a very fine last regular season game for Taylor Brooke. Taylor is an absolutely first class person and student…and she’s just plain likeable. She’ll be missed by her teammates, the fans, and UP.

Hard to pick BEST goal tonight…too many to choose from in a 5-0 win, but I really enjoyed the way Kaila found Devlyn down the left then watched her make a couple of touches before sending a laser across the goal mouth into the side of the net.

I’m confident we’ll all be back at Merlo next weekend, but we’ll just have to wait until Monday afternoon to find out.

2 assists each for Frisbie and Cameli

great performance by the Pilots tonight and especially good to see Ellen Parker get 35 minutes or so on the fied.

I REALLY like how we are playing right now, and anybody who gets us in the draw for the tournament is not going to be happy


Oh yeah, We didnt get the conference title, but we did well. its especially nice to be above the projected conference winner from the start of the season. 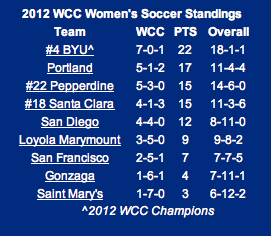 My favorite was Sippel's first, when she got to the ball Frisbie cut back. Nice reward for all the hard work she's done setting up the other forwards. Jeter's was nice too.

I was glad to see Parker get back, and Capelle was in her kit and participated in the whole warmup. Good sign.

The biggee in the Pilots favor is how they closed out the second half of the season after losing two of their finest players....

I agree with Geez, "Anybody who gets us in the draw for the tournament is not going to be happy."

The team started great, absorbed the injuries to Parker and Capelle, reinvented itself, and has moved forward even stronger than when they beat UNC. I like their chances, but the question is how much does the committee like them?

I agree with all.

Kaila, if you read this, Pilots fans love you. The goals will come. Have faith. We do!

It was a great team effort, everyone got to play quite a bit, San Francisco didn't know what hit them.

I'm hoping to see Micaela next weekend, and rumor (a good one) is I might.

I saw something I've never seen before: After the game, and the regular group session with Garrett, and the warm-down stretching with the rubber bands that is a post-game ritual this year, and another session with Garrett and the staff (partly talking about the NCAA tournament bracket announcement session on Monday, that media will be there, and about practice thereafter), there was a very close team huddle ending with a "Pilots!" cheer.

I love this team!

I forgot to mention. There were 7 young ladies on the field after the game, attended by Lisa Sari. Presumably likely future Pilots? Can anyone provide information?

Geezaldinho wrote:Oh yeah, We didnt get the conference title, but we did well. its especially nice to be above the projected conference winner from the start of the season.

We were projected to finish 5th in the conference at the beginning of the season. I am quite happy with where we ended up.

well, there are seven current Known commits for next year. my guess it was those players.

Ellie Boon - Washoughal. forward. u17, odp etc. plays club for the Columbia Timbers. among other things, she scored four goals in the US club soccer tournament championship game to take the title.

Allyssa Edenstrom Capital HS in Olympia Standout defender, either center or outside. her 5'-11' will add to our size in the middle. i think she also played some forward for her prep team. also plays Guard in Basketball. I think she may have played some in the summer league games on campus.

Danica Evans Lakewood CO forward Dani's Colorado Rush club. also has ODP and u17 pool credentials. among other things, she score 11 goals in one weekend at a tourney for the Rush.

Madison Hall Midfielder sometimes Defender. also from Lakewood and the Rush club, and also u17 camps and player pool

Kendrick Parkes - Portland Mid. a home grown FC Portland player. goes to Grant and runs middle distances and plays soccer for them, too.. her 58:40 split in the 400 relay seems pretty good, but i'm not a track expert.

Ariel Viera- Forward Scappose FC Portland. by just passing 100 goals she just became the third leading scorer in Oregon Prep history, behind Tiffeny Milbrett (131 ) and Laura Schott, (116). you folks may know Schott as the PSU coach. she scored 60 goals for Cal when she was in college. a week or two ago Ariel was at 105 and Scappose just won their last game 14-0, so I think Ariel might have passed or is close to passing Laura, but maybe Tif is out of reach.

it sounds like a stellar group of kidsand a nice mix of local and out of area kids. And with everyone coming back but Taylor, i'm sort of salivating about next season.

it will be nice to have a squad of 24. lots less anxiety for us fans, and they will be more rested those second games of the weekend. we got a little tired and dinged up in the middle of the season.

OH, and a while back i heard from a very good source there may be an eighth. stay tuned.

We were projected to finish 5th in the conference at the beginning of the season. I am quite happy with where we ended up.

I was surprised to learn while watching the replay of the game that the USF keeper was a field player who was only moved to goalie 8 games ago.

As to the 7 others on the field, doubtful that Parkes Kendrick was there. After finishing third in state 6a cross country race in early afternoon she was playing for Grant soccer team last night in a 2-1 victory at Delta Park.

Here are the highlights from the USF game. It's good to see Kurle really working for that 2nd goal and never letting up.