The nc-soccer website creator, Chris Henderson at All White Kit, and I (at RPI for Division I Women's Soccer website) work together, vet each other's numbers, and try to provide information useful to DI women's fans and coaches. I recommend using the nc-soccer system for simply tracking the RPI as it develops over the season. The RPI for Division I Women's Soccer is more for people and coaches who want a really detailed understanding of how the RPI is constructed, what its issues are, etc. Also, the RPI ... website has information on how the NCAA Tournament at large selection process and seeding work as well as guidelines for where teams need to be ranked by the RPI over the course of the season in order to be considered realistic contenders for at large selections and seeds.

The alternative "Improved" RPI I'm running in parallel this year is intended to alleviate the NCAA RPI's problem rating teams from different regional playing pools in a single system, while still maintaining the basic RPI structure. It has a very slight modification to how Strength of Schedule (Elements 2 and 3) is computed; it uses the NCAA's 2009 bonus and penalty amounts for good wins/ties and poor losses/ties, rather than the NCAA's 2011 amounts; and, in its most controversial part, it applies bonuses or penalties to the five regions' teams' ratings depending on the regions' average Unadjusted RPIs. I developed the Improved RPI after testing a myriad of possible modifications to see how they worked at solving the regions problem using game result data from the last 5 years (over 15,000 games). The Improved RPI pretty much minimizes the regions problem. At the same time, it does not sacrifice any accuracy.

You can get a detailed description of the Improved RPI here: https://sites.google.com/site/rpifordivisioniwomenssoccer/modified-rpi

Do you intend to offer a non-conference aggregate RPI for each conference?

Knowing how each conference did in elements 2 and 3 gives a good idea about which direction RPI's will trend.

Not preposterous. Aston Villa FC brought in a hawk last spring to deal with a flock of magpies invading Villa Park and damaging the pitch:

Falconry is very common at airports throughout the world......just ask Sully Sullenberger about the consequences of bird strikes. 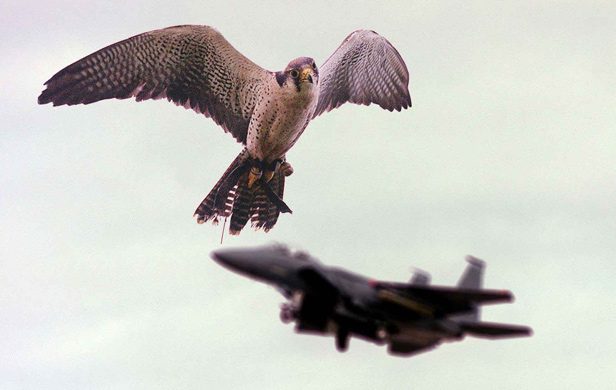 This picture was taken at RAF Lakenheath, an American F-15E Strike Eagle base in the UK.

Not preposterous. Aston Villa FC brought in a hawk last spring to deal with a flock of magpies invading Villa Park and damaging the pitch:

we had Canada Geese invade our field in High school. you can't harm the geese, but after a couple of games of sliding in poop, the field was opened for frisbee play for dogs. end of problem.

Geezaldinho wrote:Do you intend to offer a non-conference aggregate RPI for each conference?

Knowing how each conference did in elements 2 and 3 gives a good idea about which direction RPI's will trend.

The weekly RPI reports I publish actually include a conferences sheet that shows the conferences' average UNCRPIs (NC means Non-Conference) and ANCRPIs. I notice, on looking at the report, that if you only open the report within GoogleSites, the columns are somewhat compressed so that it's a little hard to identify the column headings well. If you download the Excel workbook, however, and go to the conferences page, it comes out fine. I think this will give you a pretty good sense of what you are looking for.

This is how ESPN rates the schools this morning:

You can see the entire article here: Weekly Power Rankings

Oh, and ESPN gives a shout out to Amanda:

University of Portland junior Amanda Frisbie is on pace to bring back a staple fans at Merlo Field have surely missed. Portland traditionally turned out double-digit goal scorers like "Portlandia" throws out hipster references, but no Pilots player scored more than eight goals in either of the past two seasons. With two goals in a 3-2 win against USC last week, Frisbie has six in seven games for a team quietly taking care of business.

I watched the tail end of the USC v. UW game on the Pac 12 network today. USC quite literally scored the goal at the last minute. By that I mean with a couple seconds left in OT. I suppose that helps our RPI right?

Yup, the immediate effect was to move us from 13 to 11 in the adjusted RPI?

Whether we stay there will depend on our result and a whole lot more tonight.