Tina Ellertson was on the field during warm-ups! Well, she was clearly getting some instruction & introduction to the drills from the coaches, but also some touches on the ball.
I'm looking forward to seeing her play again.

Just as KC was scoring their second goal tonight, Mrs. DD declared the Thorn's defense just "too ugly to watch….I’ve had enough."

Fortunately for this household, it was the last (scheduled) home game of the season.

Defense? Holding midfielders? We don't need those because Sinclair and Morgan.

KC deserved it today and if they win the league they'll deserve that. 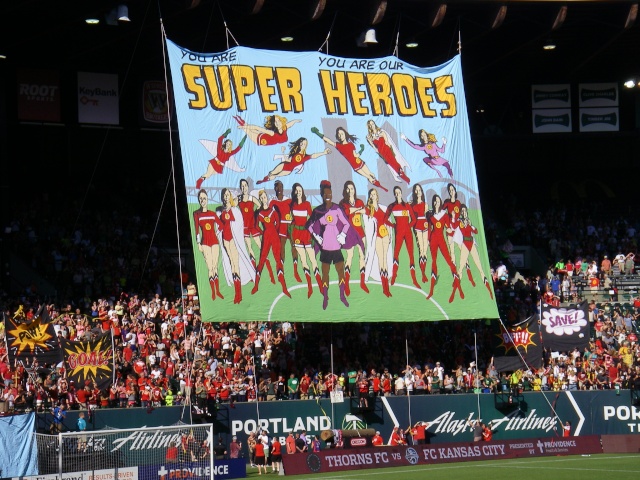 Dani talks from the heart

This was a very disappointing loss for the Thorns. Last regular home game. More than 17,000 fans. And it went wrong. Dani was clearly emotional after the game as this clip from the Thorns site shows. She isn't the most talented player on the team and she's playing outside midfield, but she left it all out there on Sunday. On the support of the home fans:
“It’s unspeakable. I wear this crest over my heart with pride. This is my home and I play for this city because it’s a part of me. I feel passionately about it and I want to say thank you to everybody who supported us from the beginning to make this happen, because it’s incredible. It’s unlike any other place in the world, in my opinion. A lot of us have played at the highest levels and there’s nothing like this, playing for your city. It’s a community and everybody’s behind you. Looking around today, and the sign before saying ‘superheroes,’ you know that’s kind of how we feel, and you guys have made us feel that way, so it’s an incredible feeling. Thank you.”

The quotes about "most of us" reported on the stumptown blog are very revealing and match up with some things I've heard from behind the scenes about disagreements over style of play and a rift on the team.

Team chemistry is the coach's responsibility and I don't think CPC has done the job this season. On Sunday the Thorns were playing a team that had not played in midweek and it was 80F or more on the field. She didn't use the bench until the 75th minute and then later brings in Elizabeth Guess. No time for Angie Kerr or Courtney Wetzel. Several of the Thorns looked gassed and they could have used fresh legs earlier.

....aaaaand Tina Ellertson just came in.
...For Kat Williamson.
Who's played every minute of the season up until now.
In a 0-0 game.
At Western New York.
Who's tied with Portland for second place.
With the winner very likely to host a home playoff game.

I don't even know with Cone anymore.

PurplePrideTrumpet wrote:....aaaaand Tina Ellertson just came in.
...For Kat Williamson.
Who's played every minute of the season up until now.
In a 0-0 game.
At Western New York.
Who's tied with Portland for second place.
With the winner very likely to host a home playoff game.

I don't even know with Cone anymore.

As it turns out, except for one goof up (no real damage), it turned out to be a decent move. Williamson has been exhausted lately, which makes sense with this being the Thorns 5th game in 14 days. Getting her some relief was important.

This was the first game all year in which I liked the way the Thorns played.

Thorns in the finals!

After a horrid start defensively, they pulled it out. Good games by Sinc, daFox, Wozzy, Heath, Weimer, and even Long after a bad first half.

Allie should have been sent off for a couple bad fouls, but KCFC was guilty of some pretty chippy stuff with no cards. Heath had to leave the game.

The real story is the collapse of FCKC. Even with the POY, defensive POY, rookie of the year, keeper of he year, and 7 Nat players they couldn't hold a 2 goal lead.

We don't get the final here, as WNY won their game.

A brilliant free kick from Tobin Heath, hold on for a half, go down to 10 for the last 30 minutes, cap it off with Sinc's goal in stoppage time: Champions.

The scene at the Baghdad Theater was wild.

There was an attacking sequence that had Foxhoven - Sinclair - Kerr in front of the goal. Go Pilots, I mean, Portland!

Dan No Yell wrote:The scene at the Baghdad Theater was wild.

You should have been in my kitchen with 4 diehard fans.

Oh yeah. We watched both Portland games, too.

The Heath goal was remarkable. Brilliant!

The Sinclair goal was a classic, great pass from Morgan, perfect first touch from Sinc as she ran into the space, and the second touch buried the ball in the far corner. Perfect!

I've been critical of Allie Long's play this year but she was a giant last night. Early in the game she was the one marking the bully, Wambach, and she set the tone for the team with several uncompromising challenges and did not back down. Tough!

Abby Wambach is the most physical player in top level women's soccer. She initiates contact on most every play. Last night was almost farcical and the referee was out of her depth in capacity to call the game. Two examples, midway through the half she called a foul on Long on a header when the commentators called it right as a clean strong play by Long.  The second yellow card on Williamson was absurd. Wambach is very strong, she's all about strength and power because her touch is hopeless, and for her to go down under that contact, which she created, is laughable.

I have to agree about Wambach. I think she's a little overrated, and the home league game against WNY confirmed it for me.

My favorite Wambach moment from last night was when she ran herself into Mana Shim and acted like she'd been taken down. Not like Shim is probably the smallest player out there or anything.

I think Wambach went down to get the call because she knew she was beat (1st yellow) knew the pass wasn't there (2nd).

I think Long covered her in the first half. Shut her down.

LaBanc also initiated contact once and got the call.
Beautiful done. 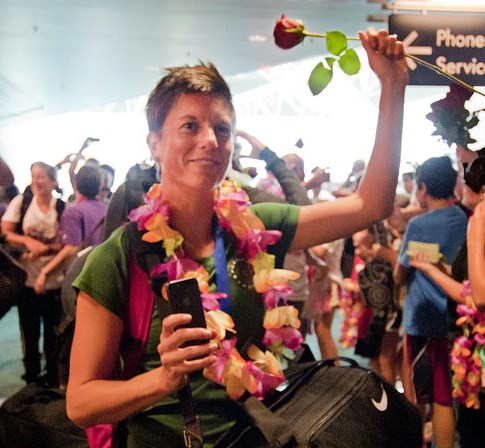 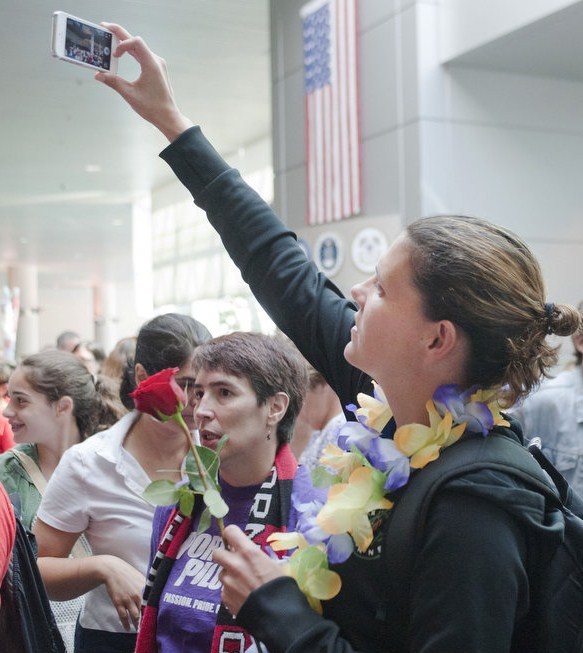 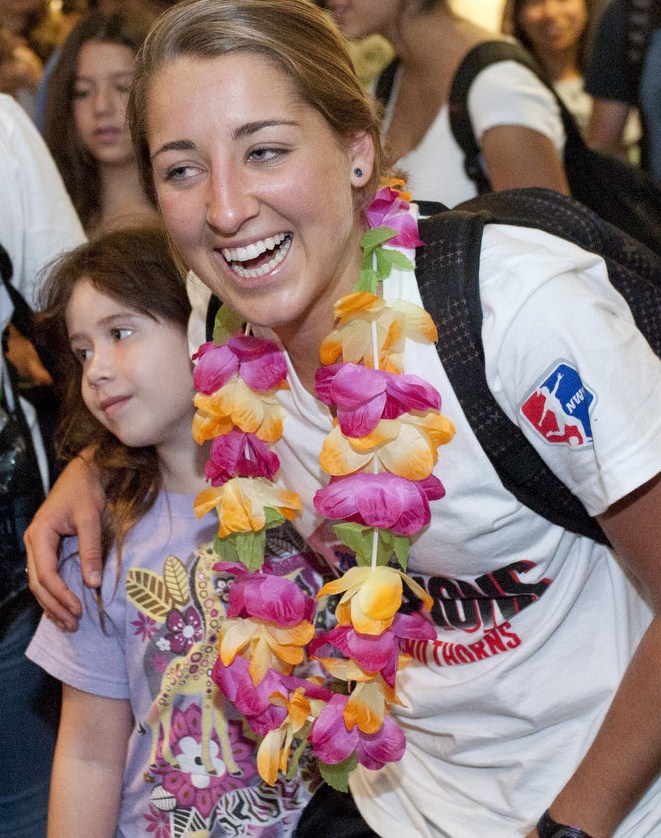 It's my understanding there will be an official welcome home at Jeld-Wen at 12 noon on Wednesday.....

Angie Kerr-Woznuk wrote:One final shot of Mt. Hood this season... But this time w/ some hardware 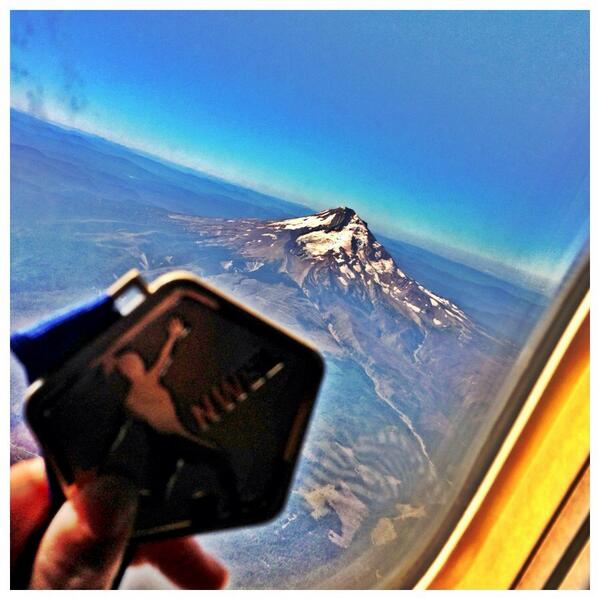 FIFA.com interview with Christine: "It's Portland...."

Good interview, thanks for sharing.

DoubleDipper wrote:It's my understanding there will be an official welcome home at Jeld-Wen at 12 noon on Wednesday.....

Yup, it's tomorrow, but a few of the ladies, including Christine, will not be in attendance.

The Oregonian wrote:The Portland Thorns didn't get a lot of sleep Saturday night as they basked in the glory of winning the first NWSL championship with a 2-0 victory over the Western New York Flash.

They'll continue the party Wednesday with an NWSL championship celebration at Jeld-Wen Field. The free event will begin at noon and will be open to the public. Fans wanting to attend should enter the stadium at gate 2 on the KeyBank Plaza located at the corner of SW 18th Ave and SW Morrison St. The gates will open at 11 a.m.

Due to national team call-ups and other commitments, some Thorns players will be unable to attend the event, including U.S. National Team members Rachel Buehler, Tobin Heath and Alex Morgan, as well as midfielder Allie Long and forwards Christine Sinclair and Tiffany Weimer.

The event will include an NWSL championship trophy presentation and autograph signings. Head coach Cindy Parlow Cone and other Thorns players will speak at the event.

Had a lengthy chat with Tina Ellertson at last night’s Pilots game…..she plans to return to the Thorns next year, “For the entire season.”

Not sure if it’s related, but the Thorns waived defender Nikki Marshall yesterday….she was one of only three players who started all 22 regular-season games this season.

We can only hope they are making room for Amanda to play that spot next year!

DoubleDipper wrote:Had a lengthy chat with Tina Ellertson at last night’s Pilots game…..she plans to return to the Thorns next year, “For the entire season.”

Not sure if it’s related, but the Thorns waived defender Nikki Marshall yesterday….she was one of only three players who started all 22 regular-season games this season.

It almost certainly was. Also, Becky Edwards will be back after her ACL, they're going to try to sign their 2013 draft pick who was in Europe all this season, and roster spots are scarce. Seeing players go is hard, but it's part of pro sports.