The International Football Association Board, the ruling body for football rules, just announced The resulting rulings from this week's meetings in a press conference. There were three items on the agenda.

First, IFAB declared the Additional Assitant Referee experiment UEFA has been using a success and the use of these officials will continue and are approved for FIFA matches ( more to follow below)

Second, the IFAB board OK'd the use of the hijab for women, pending final wording on the requirements for the design and the color. They want a garment that will be a breakaway design so players can't be injured, and they think, but have not decided, that the hijab should be the same color as the jersey. Following a trial period, final decision on design and color will be made at the October business meeting.

Finally IFAB approved goal line technology. Right now, both the camera(Hawkeye) and The chip-in-the-ball (Goalref) systems are tentatively approved pending further testing over the next couple of years. They expect that the Premier will have it by the middle of the 2012-2013 year, and Fifa will actually have both systems in place for some competitions they sponsor. ( and they acknowledged that the Bundesligue has been resistant to the technology)

They said they want it fully implemented by the 2013 Confederations Cup and 2014 WC in Brasil and that FIFA will pay for those implementations for those games. ( about $200K per stadium) . the systems would not be viewable by the public and final decision on goals would rest with the referees.

And while FIFA would pay for the technology for its contests and would leave the technology behind in each stadium, Clubs and venues would have to contract with the companies for their own implementations otherwise.

Lastly, the decision keeps the door open for any future goal line technology that meets FIFA testing guidelines, but there is NO plan to use technology on the field of play (ie, offsides).

One thing I didn't catch the first time around is that the AAR's are now authorized to call fouls around the box as well as just goals. They have been using AAR's in South American leagues for a while, but only for goals.

Oh, yeah. Though they have been using it for a couple years, electronic communication will now be written into the LOTG.

They didn't say anything about the spray foam used to mark the 10 yards on free kicks?

Is that shaving cream or whipped cream?

PurplePrideTrumpet wrote:They didn't say anything about the spray foam used to mark the 10 yards on free kicks?

I love that foam. The first time I saw it I thought, "Damn, what a great idea!"

While researching the USSF Advice To Referees and IFAB Memorandums, I came across this section in the USSF 2011-2012 Laws of the Game Memorandum:

I can think of all kinds of uses for a VANISHING spray, including getting rid of all those who fake injury: 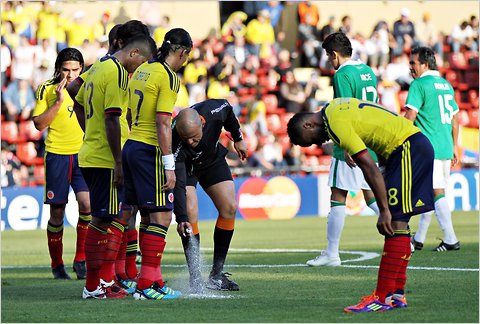 There is a company that makes special foam. While it is the same composition as shaving cream, it is less dense, so it only hangs around a minute or so. If you go to a referee supply site, you will find it.

The biggest issue with the spray foam use has been in South America where is was invented. It turned out to be a great idea there, where delay gamesmanship used to take several minutes to sort out. It only took a few yellow cards to get the wall to back up.


Now, however, folks are figuring out how to even game that, even to the point of wiping out the line when the ref isn't looking.

It is great theater.

And I have seen it in MLS matches.

PurpleGeezer wrote:There is a company that makes special foam. While it is the same composition as shaving cream, it is less dense, so it only hangs around a minute or so. If you go to a referee supply site, you will find it.

And I have seen it in MLS matches.

The product is called AeroComex Futline, and was apparently invented by a disgruntled fan tired of all the delaying tactics caused by not staying 10 yards from the ball. I read that it has been in use in Brazil since 2005.

I too have seen it used in MLS play, but not recently.

However, it could be that referees should be trained in its use.

From my translation of the company’s website that is in Spanish, it is “not toxic and it's water-based.”

My favorite foam incident is this one Between Corinthians and Santos. Apparently anyone can pack foam.


The best part is that a player ignores it and isn't cautioned.