The figure who later became Mr. Punch made his first recorded appearance in England on 9th May 1662, 350 years ago to the day, which is traditionally reckoned as Punch's UK birthday. The diarist Samuel Pepys observed a marionette show featuring an early version of the Punch character in Covent Garden in London. It was performed by an Italian puppet showman, Pietro Gimonde, a.k.a. "Signor Bologna." Pepys described the event in his diary as "an Italian puppet play, that is within the rails there, which is very pretty."

Later, in the interests of economy, the stars became hand puppets, and mr. Punch envolved into a misanthrope who manages to kill everyone in the show including his wife, baby(who he makes sausage out of), his hangman, and the devil himself.

And the Brits love him for some reason,which may explain several things about them. 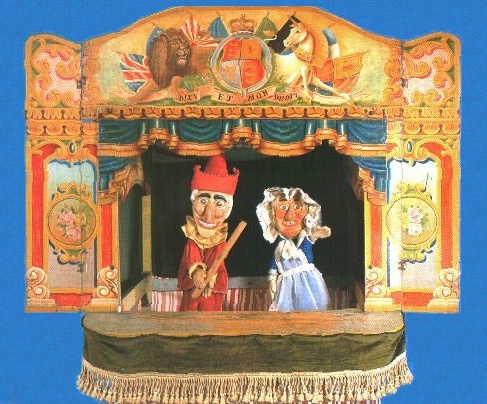 Lived near London during the 70's and 80's. Punch was still going strong in Hyde Park at the time, but never understood it, never lingered, and still enjoyed the Brits immensely.