Kelsey Davis is spearheading this...so I would hope that ALL of Pilot Nation that live in the area can attend.

The Homeless World Cup is a unique, pioneering social enterprise which exists to end homelessness in the world. It uses football to energize homeless people to change their own lives and operates through a network of over 70 international partners to support football programmes and social enterprise development.

Holding a benefit documentary screening of "Kicking It" at UP. It is FREE with a $5 suggested donation at door. Raffle to follow the screening ($2/ticket).

I don't know what is being raffled off and I don't know anything about the film, but I do know that if Kelsey is involved, it is a program worth attending.

Thanks for your post, purple passion. It got me looking into what the Homeless World Cup is and how we can help. Here’s just a little of what I found:

The benefit sponsored by Kelsey is at the Buckley Center Auditorium on the University of Portland campus on Saturday 2/25. The doors open at 3, “Kicking It” starts at 4.

“Kicking It” shows the final round of competition for the Homeless World Cup Tournament, and shares the journey of notable competitors.

Kelsey’s goals are to advocate for the organization, raise awareness for homelessness both locally and beyond, and to bring in money to support the organization. Because she has a particular affinity for children, she is hoping she can gear her efforts toward the members of the homeless community that are children.

The film, “Kicking It” has been shown at the Sundance Film Festival and distributed through ESPN films.

I don’t think all the raffle items have been determined yet, but included among the items are season tickets to UP soccer games and a signed USWNT jersey.

If you would like to contact Kelsey Davis for more information or to help in some way, her email address is: kldavis11@gmail.com

The following video briefly profiles three of the competitors who made the US Team in previous Homeless World Cups:

if Kelsey is involved, it is a program worth attending. 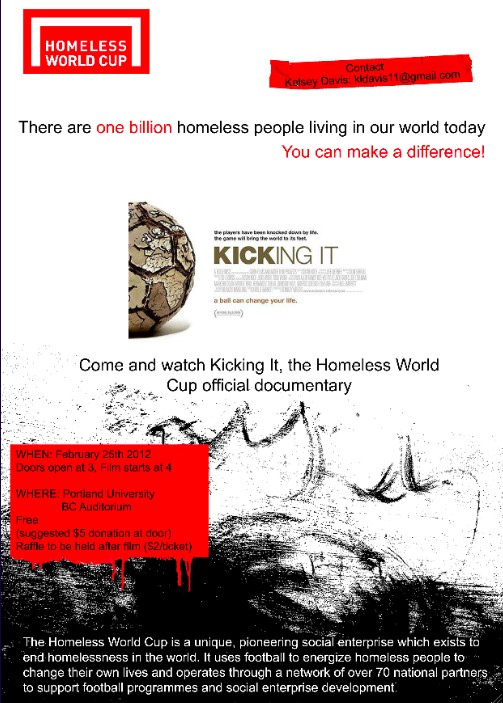 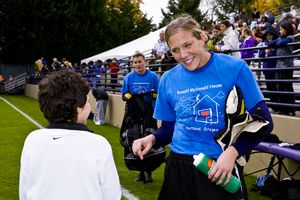 Any Cross-Conference listener who attends the screening and gets their picture taken with friend-of-the-show Kelsey Davis will receive a fabulous* prize.

*Fabulousness in the eye of the beholder. The beholder being me.

The Catholic Sentinel gives us a better idea what the raffle prizes will be Saturday at 4pm at the Buckley Center (immediately after Women’s Basketball Senior Day at the Chiles Center):

Kelsey Davis, a 2009 University of Portland graduate and former goalkeeper for the Pilot women’s soccer team, is sponsoring a free viewing of a documentary called “Kicking It,” a film about an organization call the Homeless World Cup. The film will be shown at 4 p.m. Saturday, Feb. 25 in Buckley Center Auditorium on the campus. Doors open at 3 p.m., and the event is open to the public with a suggested $5 donation at the door.

Davis, who plays for the Boston Breakers in women’s professional soccer, is promoting the Homeless World Cup, which pioneers social enterprise and aims to end homelessness in the world

Raffle tickets will be sold at the door. The raffle includes a U.S. women’s national team jersey signed by the whole team, a Portland Timbers ball/scarf signed by the players, a book by the president of the Homeless World Cup, and an Angie Wozniak (also a former UP star) Women’s Professional Soccer jersey. 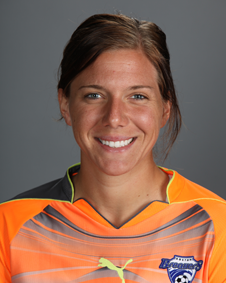 Had some quality one-on-one chat time with Kelsey today; she's still the good natured, kind hearted California Girl I remember. She's unsure of the coming season with so few teams, but she is a free agent.

The movie was an interesting and a sobering look at homelessness around the world. A pretty good turnout, but the group was pretty young (with an exception), so I'm not sure how much money was raised.

I was personally disappointed that only a small number of possible Pilot Nation fans turned out to support Kelsey for this project. I counted only 52 people total with nearly all being students.

ninjapizza - if you message me an e-mail address, I will send you a picture of Kelsey and I together.

purple passion wrote:I was personally disappointed that only a small number of possible Pilot Nation fans turned out to support Kelsey for this project. I counted only 52 people total with nearly all being students.

Face it, it was not a great time or venue for raising money.

If it were tied into a soccer match or banquet or something besides a cold, rainy, windy Saturday buried in an auditorium it would have done better. I didn't stay for the end of the film or the drawing, but when I spoke to Kelsey upon leaving she was very pleased with the turnout and the donations.

It's all about marketing and the cause. I think the cause is a good one, but does it really hit a nerve with most? Even after seeing over an hour of the film, I'm not convinced!

I attended, but had it not been put on by an alum I doubt I would have gone. The movie was interesting and only three weeks ago I never knew the HWC existed. I'd go again to support the cause, and in full disclosure, I walked away with the ball and signed book.

Backside Defender wrote:I walked away with the ball and signed book.

So you're the one! I thought I had stuffed the raffle box with enough tickets to win the ball, shirt, or scarf. Dang!

The money went to a good cause; thanks to purple passion for letting us know of the event.