This will be a tough game for the Pilots on the road, however we have generally improved since the game in Chiles on Jan. 19th. UP is 3-9 in WCC play, and USD is 5-8 (wins being SCU twice, Pepp twice, and @UP). I was impressed with the Toreros improved athleticism previously and shooting ability (14-19 from 3 against us; that shouldnt happen again). Our bigs dominated against theirs before, so I hope that we can signficantly out-rebound them again, and defend the perimeter--Johnny Dee can shoot lights out.

As far as league seedings/standings go, a win @USD and @Pepp would most likely move us to the #6 seed, with USD probably #7. However, a win over USD but a loss @Pepp still puts us in a precarious position for the #8/#9 game, and we would certainly then need Pepp to lose @SCU for us to keep the #7 spot, where we would still play USD as #6.

Beat Pepperdine - Nothing Else Matters!

up7587 wrote:Beat Pepperdine - Nothing Else Matters!

Every game is the Super Bowl. WTD!

COMING UP
• Portland (6-19, 3-9 WCC) heads to Southern California this weekend for a pair of crucial road games that will go far in determining seeding for the Zappos.com West Coast Conference Basketball Championships.
• The Pilots will be at San Diego on Thursday for a 5:30 p.m. tip-off. The Toreros (10-15, 5-

are currently sixth in the WCC standings, one spot ahead of Portland. The game will be televised live on Comcast SportsNet Northwest with Steve Quis and Jim Brogan calling the action.
• Portland will then make the short trip up to Malibu, Calif. to play the Pepperdine Waves (8-17, 2-12) on Saturday at 7 p.m. Pepperdine trails the Pilots and are currently eighth in the league standings. Saturday’s game will be televised live on FSN Prime Ticket and tape-delayed on CSN Northwest at 11 p.m. Paul Sunderland and Mitch Butler will call the action.
• All Portland basketball games will be broadcast live on True Talk 800 AM, with a 30-minute pregame show. Bill Johnson will provide the play-by-play and an audio simulcast will also be available on www.PilotsVideo.com.


ABOUT SAN DIEGO
• The Toreros (10-15, 5-8 WCC) split a pair of games last weekend, knocking off Pepperdine on the road (70-57) before dropping an 81-70 decision to San Francisco at home.
• USD currently sits in sixth-place in the WCC standings, one spot ahead of the Pilots.
• Portland’s five-game winning streak over USD was halted by an 82-63 win at the Chiles Center on Jan. 19. The Toreros made 14-of-19 three-pointers in the game, tying a Chiles Center and school record for threes made.
• Freshman G Johnny Dee leads USD and is seventh in the WCC in scoring on the year (14.1 ppg). He is the top scoring freshman in the league.
• Freshman G Chris Anderson is fourth in the league in assists (4.6) and is averaging 10.9 points in WCC games.
• USD’s roster consists of one senior, three juniors, one sophomore and nine freshmen.
• The Toreros were picked to finish ninth in the WCC Preseason Poll after going 6-24 and 2-12 in the WCC a season ago.
• Head coach Bill Grier is in his fifth year at the helm of the Toreros. In his first year, Grier led USD to the second round of the NCAA Tournament after winning the WCC Tournament. He posts a 65-90 career record.


LINEUP NOTES
• Senior PG Eric Waterford (knee) is doubtful for Thursday.
• Sophomore C Riley Barker has missed the last 18 games (knee) and is out Thursday.
• Head coach Eric Reveno has used eight different starting lineups this year.
• Sophomore Ryan Nicholas is the only Pilot to start all 25 games this year, while 11 different Pilots have started at least one game.
• Three different freshmen have started at least four games.

Is that what they call a 'home-and-home'?

This is definitely a can-win game. Pepperdine is the big one but this one would sure be nice too! Let's see big games from our bigs and some good 3-point defense. Obviously, taking care of the ball would help. And making FTs.

Again, as a service to our readers, here are tonight’s prognostications from Ken Pomeroy, (it’s too early in the morning for Las Vegas odds):

The Pilots have four remaining games: @USD; @PU; SMC; and @BYU.
The Waves have two remaining league games): UP; and @ SCU.

St. Mary’s was favored by 15 at home to LMU last night, but ended up losing to LMU 75-60. LMU has now defeated both BYU and SMC (and USF, UP, SCU, PU, and USD) on the road in WCC play; their only road loss in WCC action was to Gonzaga. Unfortunately for LMU, their three remaining games are at home, but they obviously own some tie-breakers!

FYI, Pepperdine steps out of league play to face the Seattle Redhawks in Seattle tonight. Let's hope for a 6 overtime game.

Interestingly, the Redhawks, with their 8-14 record and ranked higher than PU and are favored by 6 tonight. The early prediction has PU beating UP by 3 in Malibu on Saturday. So, yea, let’s hope for that 6 overtime game.

From The Sports Network:

With just one win in the last month, the University of Portland Pilots find themselves with the fewest overall wins in the West Coast Conference, as they challenge the San Diego Toreros tonight at Jenny Craig Pavilion.

Portland, which has a total of just six wins this season, two of them coming in the first two games of the campaign, is only 3-9 in the WCC and those three wins have come against the only two teams (Pepperdine and Santa Clara) that lie beneath the Pilots in the standings. A week ago, Portland was beaten up by Loyola Marymount at home in a 76-62 final, the team's second straight loss and the eighth in nine outings overall.

As for the Toreros, they too were handed a loss in their most recent contest, an 81-70 final versus San Francisco last weekend. The defeat snapped a modest two-game win streak, the first set of back-to-back victories since San Diego began 2011-12 with four wins in five games. With a 5-8 record in conference play, USD is just ahead of the Pilots in the standings.

San Diego, which posted an 82-63 win in the first meeting of the season versus Portland, snapped a five-game series slide with the triumph and is now ahead in the all-time series by a count of 42-27.

The Pilots had four players score in double figures against LMU at home last week, led by Ryan Nicholas and Tanner Riley with 13 points apiece, but that was the extent of the good news for the hosts. Kevin Bailey and Tim Douglas dropped in 11 points apiece as well, but no one else on the team made more than a pair of field goals outside of the foursome. Overall, Portland is scoring just 65.2 ppg this season, but giving up 76.2 ppg which means its minus-11.0 ppg scoring margin is one of the widest in the nation. With points so hard to come by, it makes sense that Nicholas is the only double-digit scorer on the roster at the moment with his 11.3 ppg, his 50.2 percent shooting from the floor based on the fact that he tries to stay as close to the basket as possible.

The Toreros turned the ball over 17 times and shot just 8-of-23 behind the three-point line last Saturday against a San Francisco squad that made good on close to 52 percent from the floor in order to capture a double-digit win at JCP. Johnny Dee dropped in a game-high 23 points for the hosts, followed by John Sinis and Christopher Anderson with 16 and 15 points, respectively, the latter handing out six assists and making six steals in an effort to offset seven turnovers. Dee is certainly someone who can pace the team in scoring, as he leads the group in conference games with 14.2 ppg, but he can also be hit or miss which has been the case the last four games. Against Pepperdine, Dee tallied just two points, five days after dropping 19 on Santa Clara. However, prior to the meeting with the Broncos, Dee had just five points versus Saint Mary's, so to expect him to step up against tougher defenses is not a safe bet.

Portland has just a single true road victory this season and that came against Santa Clara, so to expect the Pilots to put all the pieces together and take down the Toreros would be asking quite a bit.

Las Vegas favors the Toreros with a 5.5 point spread; Pomeroy has the Toreros by 7; and Basketball State has USD by a whopping 19!

With points so hard to come by, it makes sense that Nicholas is the only double-digit scorer on the roster at the moment with his 11.3 ppg, his 50.2 percent shooting from the floor based on the fact that he tries to stay as close to the basket as possible.

I call bullsh!t. Ryan is averaging 0.7 3-pointers a game (while shooting better than Nem from 3) and is not afraid to shoot the mid-range jumper. I feel confident in Ryan's shot from all over the floor and I think Ryan and the coaches feel the same way. To say he stays as close as he can to the basket is a lie.

Definitely available at my apartment, less available in the Willamette law library - where in all likelihood I'll be spending my evening ...

Ah, brings back some memories . . . though I spent more of my time at the pool table on the other side of the building. 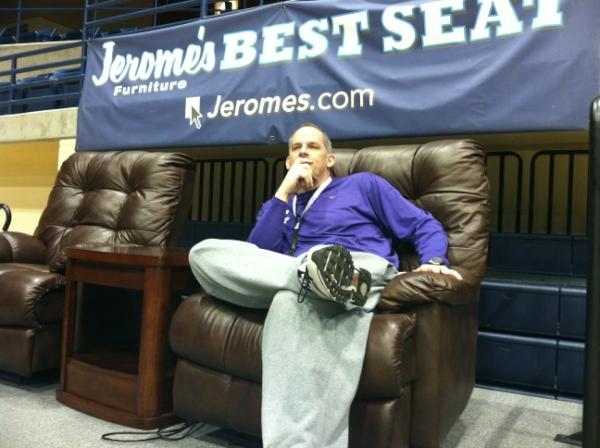 Just realized the start time and found the video at USD's site. Watched about 25 seconds of the first half, Pilots down 7. Since the wife is upstairs watching Breaking Dawn, the grainy video feed seems like a GREAT option.

Technical foul on Rev... it needed to be done--he seems to be the only one fired up tonight.

I guess the team is saving all their energy for Pepperdine; at least I hope that is what is going on. Because the play is sloppy, sloppy, sloppy.

That Jenny Craig Pavilion is emptier than Chiles and just as lifeless and spiritless...

Kevin Bailey attempts a lob pass, and instead throws it in for a 3.

The play-by-play has never seen an attempted alley-oop go into the net? It's not a super common play, but I have definitely seen it a few times.