I will let others fill in the blanks regarding a scouting report, but wanted to remind everyone of the revised starting times.

USD @ 8pm on Thursday and USF @ 1:30pm on Saturday (some of us will have to attend that early starting game in our robe and slippers)!

Both games will be broadcast on Comcast Sports Northwest.

OK, I'm going to take the keys from an administrator here just this one time and consolidate two threads into one so that we can get his scouting report into the original thread:
PilotNut wrote:

This is an important game, seeding-wise for the Pilots; we need to build the cushion over a couple of teams.

I watched a bit of the USD-BYU game last night, and while the Toreros were clearly over matched (the first half was only as close as it was due to a slow shooting start by BYU), but looked improved over previous year's teams. USD has gone through so much the past couple seasons, and maybe finally all the bad apples are out of the barrel and they can focus on playing... I like that we had an extra couple days to prepare for the game, since USD played Monday night.

Any word on pasta on Saturday with the early start?

How about another Chalk Talk before the Thursday or Saturday games. It worked last time!!!!

Any update from the marketing folks on the color of the those funny things the girls shake. (That just sounds a whole lot better than pompoms or pom poms).

DoubleDipper wrote:Any update from the marketing folks on the color of the those funny things the girls shake. (That just sounds a whole lot better than pompoms or pom poms).

I'll explain when you're older.

Las Vegas has posted the over/under for tonight’s matchup, and the Pilots are favored by 4.5. AccuScore gives the Pilots a 55% to 45% chance, and Pomeroy has the Pilots by 5.

A few points from Sports Network:

This matchup features two of the worst statistical teams in the WCC, in both USD and UP as both teams rank in the bottom third of the conference in scoring offense and scoring defense. Despite its poor offensive showing, San Diego is sparked by one of the conference’s most exciting young players, Johnny Dee. The freshman is fourth in the WCC in scoring with 15 ppg, and he’s second in both 3-pointers made per game (3) and 3-point percentage (.432).

As lackluster as San Diego’s offense has been, Portland’s has been even worse, as the Pilots own a scoring margin (-12) double that of the Toreros’ (-6). On top of being neither a strong offensive nor defensive squad, the Pilots struggle taking care of the ball, ranking last in the WCC in turnover margin (-4.06) and assist-to-turnover ratio (0.7).

So, do we stick Rodgers on Dee, for D?

It would seem that like we can go a long way towards limiting the Torero offense by controlling Dee and Manresa.

Will we see Riley Barker suited up tonight?

Apparently, no Riley tonight. Don't know about USF on Saturday.

I want to see the highlight reel of USD's threes for this game.

oh brody wrote:It was like they had five Jared Stohls running around the court

They were hitting threes at rates that Stohl only approached during warmups. Ridiculous. Just plain ridiculous. Sometimes it just ain't your night.

I dont know that I have ever seen shooting like that from an entire team. Oye.

Agree on the 3s, but we put so much focus and emphasis on Dee that many of the 3s were wide open. It's great to pay attention to Dee, but you still need to recover and at least challenge the shots of the other guys a bit. I like our effort, and often got them down to the end of the clock, only to allow an open shot because we didn't recover after helping off our man. They also shot the ball extremely well, obviously.

We also had 17 turn overs. Need to be taking better care of the ball at this point in the season.

Here is a list of players with 3's last night:

To put it in perspective, they shot 70.6% from the line (With nobody guarding them and the teletubbies banned from the Mezzanine

). It wasn't one guy who did it to us. It was the whole team. Sometimes it's nacho night!

I thought our guys played hard and continued to fight even though every time we made a small run, they hit another three. It was demoralizing for me as fan. I'm sure it was the same for the players, but the kept fighting.

I thought K Bailey did a great job on Johnny Dee. Of all the guys that took a three, he had the worst %. (I know 60% is still bad

) I was also glad to see Waterford come in and play with some energy and confidence.

Agreed on Waterford... he was a bright spot last night. He was finally given an opportunity and played quite well on both ends of the floor. I would love to see him be able to contribute solid minutes regularly.
_________________
Run 'Em Aground Pilots!

The "expert's" crystal balls indicates our Pilots will not win any more games this year.

For today's game the prognosticators are saying it’s going to be USF in a runaway with at least a 70% chance of winning.

UPSET ALERT: after losing to USF 104-70 just last week, this is our game to keep us from the 7/8 play-in game in the tournament. Against all odds and against the predictions of all the pundits, the Pilots will find a way to win by limiting their turnovers and banging inside.

All conditions were right for a win today against USF. Villa Drumsquad showed up in force and made noise, the pom poms were Purple, and a fired up Eric W. started at the point on his 23rd birthday. BUT, Eric was hurt in the 3rd minute, we gave up too many turnovers, and a big USF run in the second half.

Talked to TD after the game; he and the team are resilient, and ready to take on GU.

A better showing by the Pilots tonight, but 20 turnovers and an inability to finish at the rim did us in... Bailey looked brilliant at times, Douglas looked dreadful at times... too bad Nicholas was in foul trouble, we could have used him down the stretch.

If you are a coach, what do you do with Nem? He has obviously been in a slump this year, but he was just horribly invisible today; he had a couple WIDE OPEN looks and didnt even look for a shot... but goes 0-7 from the field, with 1 assist & 2 turnovers.

The lack of offense is killing this team. Giving up a 19 - 2 run after getting a nice lead!?

No shooters, and too many bad, forced passes. So frustrating.

The amount of turnovers has just been brutal this weekend. All these good young forwards aren't much use if the passes to them get picked off.

You really have to feel for Eric, earning a start then going to the locker room after two minutes. I thought Rogers had a nice game filling in. Today when he drove to the basket he looked to put up a shot instead of passing like he had been doing and he ended up scoring and drawing fouls.

How did everyone like the alumni game? I loved seeing the guys out there again. Rick Raivio can still run the floor, Casey Frandsen can still hit his shots, Sherrard drove past Raivio and threw down a couple dunks, and Cooper hit one from way downtown at the end. Greg Klosterman and Kasey Flicker brought me back to my first Pilot team and that WCC title.

Frandsen drove for an and-one. During the free throw Pat Galos turned to us and asked, "Did you see that? He took three jump stops in the same move." 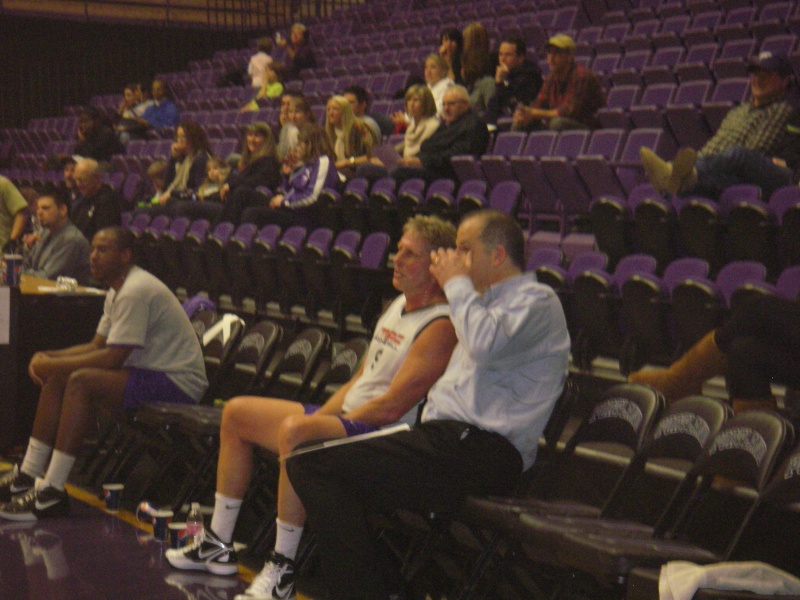 I loved it, and as you know, there were a number of PN guys who stayed until the very end. Great to see the former players with their wives and kids, including Casey Frandsen, who's really got game (still).

Spent a lot of time with Donald Wilson (he too was a spectator). Donald looks great and is now done with basketball as of the first of the year to settle down in the States with his beautiful wife (Portland lass) and two young children. He intended for this to be his last year, but a hamstring pull in December accelerated his move to retire from his team in Hungary.