CHICAGO (AP) — Forward Sydney Leroux is on the U.S. roster for women's Olympic soccer qualifying, the only one of the 20 players who was not at last year's World Cup.

Leroux was born in Canada but switched nationalities in 2008. She was the top pick in the Women's Professional Soccer draft last week, selected by the Atlanta Beat.

In the North and Central American and Caribbean qualifying tournament at Vancouver, British Columbia, the Americans are in Group B and play the Dominican Republic (Jan. 20), Guatemala (Jan. 22) and Mexico (Jan. 24). The top two teams advance to the semifinals along with the top two from Group A, which includes Canada, Costa Rica, Cuba and Haiti.

Winners of the semifinals on Jan. 27 qualify for the London Olympics.
Qualifying will take place on an artificial turf field at BC Place.
The roster:

Big routs in opening round in Vancouver. Christine has four and an assist in 6-0 win over Haiti and US tops Dominican Republic 12-nil. Unfortunate Ali Krieger injury might reopen the door for Stephanie.

it was no fun watching the match without any Pilots on the field for the U.S..
while it was a scoring fest, this didn't look like the number 1 team in the world. this was not a crisp passing possession clinic, just straight up out run your opponent soccer. this U.S. team looks awkward if it is not charging forward. the players Pia looks to favor are not good at their feet except maybe Tobin Heath. they look one dimensional. there is no flair or personality to this team. i don't know if I can take another Carli Lloyd long range blast. give me Stephanie-Keelin Winters- Meagan triangle anyday. because winning is everything, Pia talks a beautiful game, but she won't risk losing her big physical players for longer term development. I can't help thinking every time I see Jillian Ellis on the sidelines that her ULCA style game is influencing this team. ugh

I also doubt if Clive Charles would ever be seem jump up and down after the 14th goal.

Call me spoiled, maybe decades of UP and FC Barcelona soccer has made my view of soccer jaded. but it was hard to be excited for last night's game.

I loved the Rapinoe, Cox and Heath triangle combos I saw during the Celebration Tour versus Canada! They really work well together. Great chemistry. They always had something cooking offensively at the left side of the box. All 3 of them displayed great dribbling and passing skills. At the very least, if one of them didn't get a shot on-goal or a threathening cross, there were always many corners.

A gangster got shot and killed in the bar of the Hotel in which te Women's team is staying. The team is safe and none witnessed the shooting.

Saved by our instant yoga session. Was about to walk to Starbucks when all hell broke loose in the lobby of our hotel! Life is precious."

PurpleGeezer wrote:A gangster got shot and killed in the bar of the Hotel in which te Women's team is staying.

Apparently the only shots fired this time were toward the goal.

VANCOUVER, British Columbia (AP) -- The scores look absolutely ridiculous. 14-0. 13-0. The two most lopsided wins in the history of the U.S. women's soccer team. One of the few lively things about the second game was the constant chant of "Ju-das" directed at the player who scored five second-half goals.

The United States took it to Guatemala 13-0 Sunday to clinch a berth in the semifinals of the CONCACAF qualifying tournament for the London Olympics. It was a great game for statisticians and for those who think the Americans need to learn to chill when they have a big lead.

The games are available on Universal Sports if you have cable and on their internet site if you don't. The US plays Mexico at 7:30 Tuesday night (1/24/12).

Tournament rules don't allow additions to the team once the qualifiers start. She can't be added to the Olympic team until after the tournament.

A_Fan wrote:The games are available on Universal Sports if you have cable and on their internet site if you don't. The US plays Mexico at 7:30 Tuesday night (1/24/12).

For those of you with DirecTV, Universal Sports is channel 625. Brandi Chastain has been one of the commentators and I think she has been really good, as much as I hate to admit it. Some excellent technical commentary and analysis.

For those of you with DirecTV, Universal Sports is channel 625. Brandi Chastain has been one of the commentators and I think she has been really good, as much as I hate to admit it. Some excellent technical commentary and analysis.

You can also get the games on the CONCACAF site with no commentary whatever (except crowd noise). It's the same video feed you see with Brandi commentating. You need Silverlight.

Then you can figure out that what the Canadians were chanting every time Sidney touched the ball was "Judas, Judas..."

There was a lot of that while she scored her 5 goals.

She didn't seem to care.

Unfortunately, I heard that Ali Krieger tore her ACL during the game and will not be playing in the Olympics. This will open up a slot for a defender........

Krieger is a right fullback, and Steph plays on the left, but yeah, there will be a slot opening up.

Unfortunately, I heard that Ali Krieger tore her ACL during the game and will not be playing in the Olympics. This will open up a slot for a defender........

Mac did her rehab in less than 4 months to make the 2003 World Cup roster, so stranger things have happened.

The United States booked its way to London on Friday night with a 3-0 victory over Costa Rica in the semifinals of the CONCACAF qualifying tournament, a game more suspenseful than most anyone expected.

Christine scores twice and the Canadian women's soccer team booked its ticket to the 2012 Olympics Friday with an emotional 3-1 win over Mexico at BC Place.

The win sets up a Canada-U.S. final in the CONCACAF women's Olympic qualifying tournament on Sunday, with both teams assured of a berth in the London 2012 Olympic competition.

And it was a pleasure to listen to the Canadian announcers on the Concacaf website for both games.

Midfielder Sophie Schmidt had a particularly strong two-way game before being replaced by Brittany Timko late in the game and LeBlanc – sporting streaked red hair – made two key second-half saves.

Although both Canada and the USA are now assured berths in this year’s Olympic Games, tomorrow’s (Sunday 1/29) CONCAAF final should be a great match to watch.

Seriously, the team looked Great, and all the UP players impressed this tournament.

Of COURSE Leroux had to come on as a sub. If she had scored, oh boy...

Loved how the crowd cheered her.

Seriously, the team looked Great, and all the UP players impressed this tournament.

Yea, I originally had Morgan at #4 on my list, but realized she couldn't do it alone.

She is, however, the new wallpaper on my laptop. 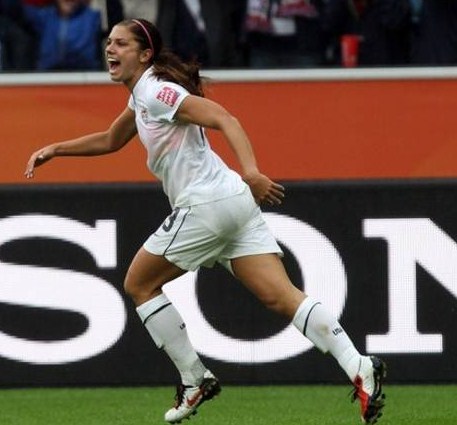 I plead guilty as charged, and it has nothing to do with my previous insanity pleas.

As many of you know, there are a number of athletic women in this year’s SI swimsuit edition. But, what I didn’t know until my wife brought a copy home, soccer super star Alex Morgan is only wearing BODY PAINT, no fabric.

Needless to say, Alex just replaced herself as the wallpaper on my laptop. 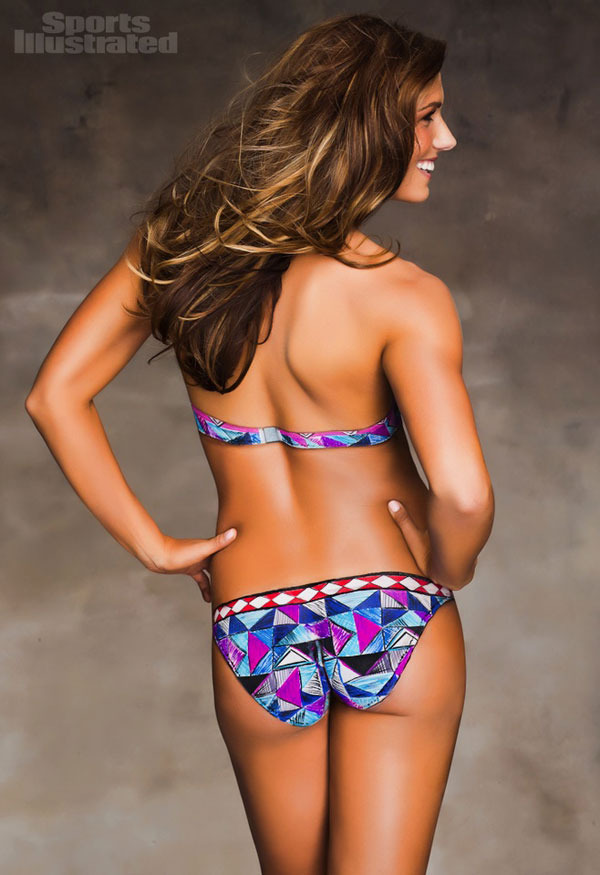 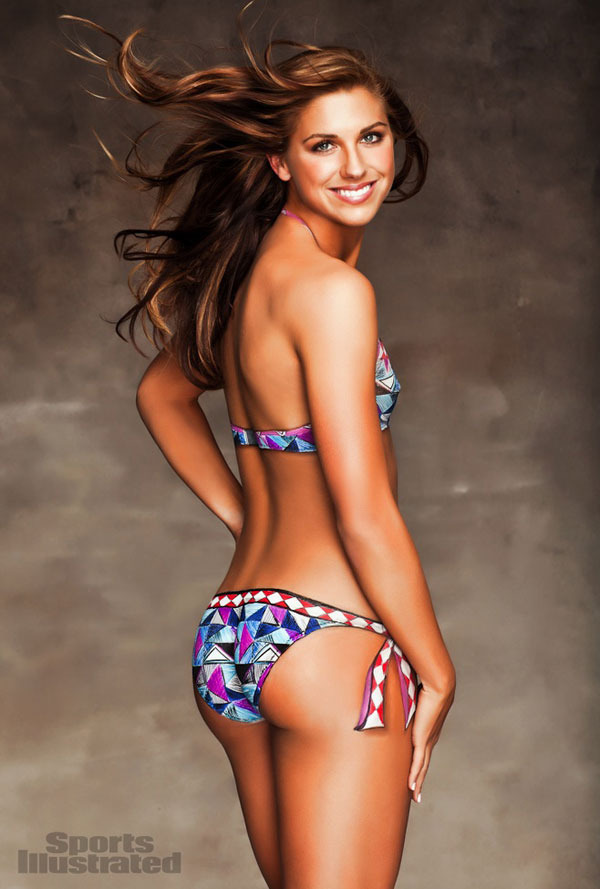