People of Boise; come out to this free UP event before the game Wednesday night!

A) I’m hoping it’s not just for “people of Boise.”
B) This may be a new approach to help the guys play fast and loose

I don’t believe they have Pliny at the Ram, but maybe I’ll find my new favorite Blind Pig IPA –

Heading to Boise in the morning for our game and doing a background check on #84 Boise State (7-1); thought I’d share a few of the facts:

Boise State is a really, really good three point shooting team; there top three shooters combined average is about 50% on the year behind the arc (Drew Wiley 23/42 for 55%), and they outscore their opponents by an average of 24 points. They are offense oriented team with the guards doing most of the scoring.

*AccuScore gives Boise St. an 83% chance of beating the Pilots.

*AccuScore is a fee based sports betting system.

The brief respite of a torturous OOC schedule is over and once again the men prepare for another battle against Boise State. This is just another step in preparation for conference play. This should be a competitive game and even one that we could win if we play well. Yes Boise is a offensive team and certainly shoots well from behind the arc but thats the thing with outside shooting teams, if the ball isnt falling it can make for a long game. We need to defend of course but more than that I think a key will be to really put the pressure on the Broncos with our offense. Make them work on defense, wear out some legs and see how things shake out.
It doesnt get any easier with Ohio coming to town Saturday, they are a legit MAC team and challanged Louisville until the end. At least we will be at home, something we havent enjoyed in a while.
Good luck and lets get home healthy. 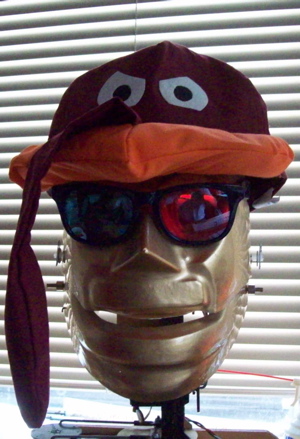 oldtimer wrote: This is just another step in preparation for conference play. This should be a competitive game and even one that we could win if we play well.

Agreed; the guys just have to remember they can win! Nostalgia just isn't what it used to be.

Bright and SUNNY here in Boise!

Walked all over town, including a place called See Jane Run (darn, it wasn’t what I was expecting!) looking for a Virginia Tech Hokies hat, but got nothing but confused looks.

I did snag a ticket to tonight’s game in what I’m told is the STUDENT section; this ought to be interesting…….

Hey, those guys in the stands wanted to fight LeGarrette Blount. No telling what they'd do to you. Be careful out there!

Does anyone have a link to video or gamecast or something?

Does anyone use the chatroom anymore?

According to their stats site its Boise State 41:36 Portland at the half.

Well, I survived the student section, and we didn’t lose it to their 3 point shooting. The Broncos really took over inside in the second half. The guys played their hearts out, we just didn’t have the speed and agility inside they did. Our guys were very leg weary midway through the 2nd half (probably due to all their recent travel and lack of rest) despite liberal substitutions by Rev. We definitely missed Riley Barker and his potential to score and swat inside.

BSU isn’t that intimidating, but once they got going and fans got behind them, you could tell it was all over. I haven’t seen the box yet, but I’m sure we were badly outrebounded, killed in the paint, and BSU had a bunch of fast breaks off turnovers/steals. We didn’t turn it over much, but when we did it led to runs by BSU.

It was a different starting lineup tonight, with Kevin Bailey and Tanner Riley instead of Nem and Tim. Tim came off the bench and played very well, but Nem is still really dragging, is guarded closely, and was not much of a threat.

I’ll give my beer report when after I’ve had one or two more. :face:

up7587 wrote:Hey, those guys in the stands wanted to fight LeGarrette Blount. No telling what they'd do to you. Be careful out there!

(First, let me start off by saying, it’s at times like this that PN could really use a spell/syntax/grammar checker).

PurpleGeezer thought I might like the 71 Pale Ale as an adult beverage, and he was correct, it was very tasty and refreshing after a 22 point loss. Didn’t make it to the Ram before the game (long story), but after the game (with 8 BSU students) we piled into two cars and finally headed to the Ram. Following the 71, we all had a seasonal beer called Sno Angel (or something like that) and a Chicken Amber Sandwich; both were great. Finally, my new friends and I toasted Larry Williams

for the great work he’d done at UP and wished him continued success as we downed our Big Horn Blondes (I was just so tempted by the name I had to have one!); it was probably the best of the three beers.

The game was good fun and in a great atmosphere, but there seemed fewer fans than their usual 3600. The students were boisterous but courteous to an old person in their midst, and often told me the Pilots were the best team they’d seen this year. It turns out many of them had done two year missions while in college and were way more mature than I was in college (or even now). (Yes, these are some of the same students that went to the Ram post-game). Every one of them seemed to want UP to beat BYU for some reason, but I didn’t ask why.

Carlos, the manager, said we could stay at the pub as long as we wanted as long as we kept buying beer, but it’s close to midnight here, and as I have to head to the airport in about 4 hours…..