Not sure how closely people have been following Pooh, but after hardly playing at the first month or two, Pooh is starting to get his opportunities. And he's running with them, scoring 11 points against the Lakers and 4 assists in 10 minutes against Dallas. Keep it up Pooh!!!

When does he come to Portland and are we going to have the PN cheering section?

blacksheep wrote:When does he come to Portland and are we going to have the PN cheering section?

Assuming he's still with the Kings, Monday January 24th. I've already got my tickets. Who else is on board?

Now if I could just figure out if I should wear purple or not. With purple being a color of the visiting Kings, I'm not sure I could stomach wearing it in the Rose Garden when the Blazers are playing.

And need i mention he's 12-13 from the charity stripe on the season?

Where do you see that?? Am I missing something?

EDIT: Looks like I'm not the only one who saw it. Mike Tokito of the O did too, and wrote about it!

Still plugging away in Sacramento, Pooh has been earning more time and doing well, playing a crucial role in the Kings' victory over the Suns on Sunday.

Jason Jones, the beat reporter has a small piece in the Bee today on how he's stepped in and performed well, especially in the fourth quarter, when this young team has trouble closing out games.

I got my tickets.

A Patty vs. Pooh showdown is about the only way you could get me to pay for Blazers tickets with my own money...

So who is up for a road trip?

Number 4 also, too bad that big Aussie got in the way...I'm down for a road trip DTR.

Our man had 8 points, 4 rebounds and a new career high of 11 assists (and 0 turnovers) tonight! He also tied the game with a layup at the end of regulation to send it to overtime. The Kings didn't get the win, as usual, but it's great to see Pooh getting in done in the League.

I was at the Garden tonight. Pooh had 2 points, 2 rebounds, 1 assist in about 10 minutes and for most of the time he was in he guarded Patty.

As for the Blazers, I don't follow them very closely. I don't really have the desire to watch entire NBA games. My impression tonight is they didn't look all that special. Most of them wanted to be jump shooters, then the guys who decided to drive and get inside missed a bunch of layups and tip-ins. It sounds like a big part of the hot streak LaMarcus was on was his willingness to get inside like a forward. Didn't do much of that tonight.

Anyway, I got to see a Pilot in the NBA. And it's a guy you have to root for.

Here's the sign the article mentions... wish I could take credit for it, but alas, I can't: 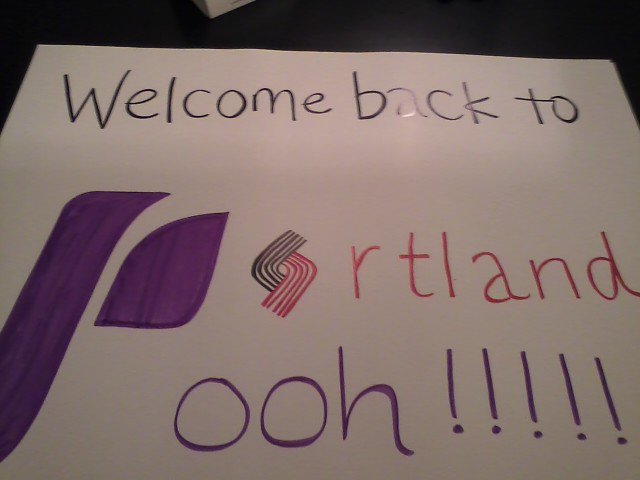 Great for Pooh, he had it coming to him to have the chance to be on a NBA
team that played at the Rose Garden.

As much of a disappointment as the loss was for the Blazers and the fans, being there to see Pooh step on the court was great. When they showed the sign above (well done, by the way) on the big screen, there was some scattered applause throughout the arena. Not as much as I would have hoped, but enough to dull the sting of losing to the conference's worst team. After we cheered when Pooh scored, the couple sitting next to us did pick it up and clap when the sign came on the big screen.

Thanks to Pooh for all the memories and best of luck for the rest of your career in the League.

Whats a approx. journeyman's salary in the NBA like for Pooh, I know you know?

The minimum rookie salary is $473,604 for this year under the current Collective Bargaining Agreement....

DaTruRochin wrote:The minimum rookie salary is $473,604 for this year under the current Collective Bargaining Agreement....

Thanks DTR! Great for Pooh!!!

Barring an impending lockout (or Pooh getting cut), under the current deal that would jump to $788,872 in year 2!!

I tracked down Pooh at the Rose Garden before the game (I was there covering a local high school, which just happened to play their annual Rose Garden game when the Blazers played the Kings) and wrote my weekend column on him for my paper:

Back to Pooh's corner

writerpilot wrote:I tracked down Pooh at the Rose Garden before the game (I was there covering a local high school, which just happened to play their annual Rose Garden game when the Blazers played the Kings) and wrote my weekend column on him for my paper:

Back to Pooh's corner